Skip to main content
Live Now
This article appeared on Forbes​.com on May 27, 2017.
TOP

The fanfare surrounding President Trump’s recent visit to Saudi Arabia failed to lift the shroud off the very tight corner that the Kingdom was in. It is a corner that some of the Princes realize they have allowed themselves to be pushed into. If they are to escape, a large dose of potent medicine will be required.

The nub of the Kingdom’s problem centers on the fact that it is a giant socialist enterprise. According to the Saudi Ministry of Labor and Social Development, a whopping 67% of employed Saudis are on the Kingdom’s payroll. Many of these state employees do little more than collect a paycheck. Coupled with this is a tangled maze of juicy subsidies and handouts Saudis receive for doing nothing. Where do the funds come from? Oil, of course.

The nub of the Kingdom’s problem centers on the fact that it is a giant socialist enterprise.

With the collapse of oil prices in 2009, reality set in, and the Princes became squeezed tightly into an unfamiliar corner. In an attempt to move out of the corner, Mohammed Bin Salman, the Deputy Crown Prince, produced a bold plan, Vision 2030. His plan includes a massive privatization (the sale of a piece of the state-owned oil giant Aramco), a sharp cut in wages and benefits for civil servants and significant subsidy cuts. The wage and benefit cuts didn’t go down well. So, the Kingdom reversed course and cancelled many of the cuts. The Princes learned quickly that once a government gives away goodies (read: grants so-called “rights”), it’s hard to take them away.

One change that was not rolled back was the switch from the lunar-based, religious Hijri calendar to the western Gregorian calendar. This occurred on October 1, 2016. The reason for this radical change was simple economics.

Moreover, the HHPC accounts for the disparity between the necessary length of the HHPC (364 days) and the astronomical calendar (roughly 365.24 days, the duration of one full orbit of the Earth around the Sun) by simply tacking one additional full week to the end of every fifth or sixth year (specifically 2020, 2026, 2032, 2037, 2043, 2048 and so on). This keeps the calendar in line with the seasons — serving the same function as the leap year in the present Gregorian system. 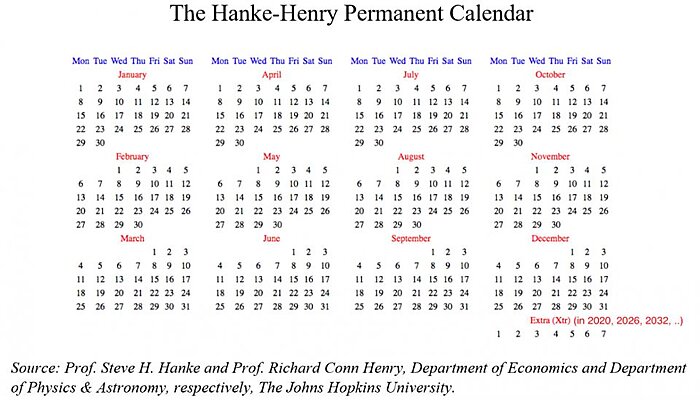