The year 2012 has come and gone, and so have many things that were once accepted as conventional wisdom. Let’s take a tour d’horizon and examine three ideas that bear rethinking in 2013.

Rethinking the Money Supply
I begin with the nonsensical way that most central banks, including the U.S. Federal Reserve, measure the money supply. Conventional wisdom holds that the best way to measure the money supply is to define the components that make up a particular measure of money (from M0 to broad M4) and then simply add up the components to obtain a total.

But, this convention contains a fatal economic flaw. The components (assets) that make up the money supply contain varying degrees of “moneyness” — defined as the ease of, and the opportunity costs associated with, exchanging assets into money that can be readily used in transactions for goods and services. Accordingly, the components should not receive the same weights when added together to yield a money supply measure. Those components with the most moneyness should be weighted more heavily than assets with less moneyness.

In short, the Fed’s zero interest‐​rate policy has exacerbated a credit crunch that has been holding back the economy.

Thanks to Prof. William A. Barnett and the Center for Financial Stability (CFS) in New York, the superior measure of the money supply for the U.S. is available. The components are given weights, depending on objective market prices, before they are summed to yield a “Divisia” metric (after its inventor, the famous French engineer‐​economist François Divisia, 1889- 1964).

To illustrate just how dangerous the conventional wisdom about the money supply can be, let’s revisit former Fed Chairman Paul Volcker’s highly praised inflation squeeze, which was ably profiled by Prof. William Silber, in his recent book Volcker: The Triumph of Persistence (Bloomsbury: 2012). In the late summer of 1979, when Paul Volcker took the reins of the Federal Reserve System, the state of the U.S. economy’s health was “bad.” Indeed, 1979 ended with a doubledigit inflation rate of 13.3%.

Chairman Volcker realized that money matters, and it didn’t take him long to make his move. On Saturday, 6 October 1979, he stunned the world with an unanticipated announcement. He proclaimed that he was going to put measures of the money supply on the Fed’s dashboard. For him, it was obvious that, to restore the U.S. economy to good health, inflation would have to be wrung out of the economy. And to kill inflation, the money supply would have to be controlled. Chairman Volcker achieved his goal. By 1982, the annual rate of inflation had dropped to 3.8% — a great accomplishment. The problem was that the Volcker inflation squeeze brought with it a relatively short recession (less than a year) that started in January 1980, and another much larger slump that began shortly thereafter and ended in November 1982. 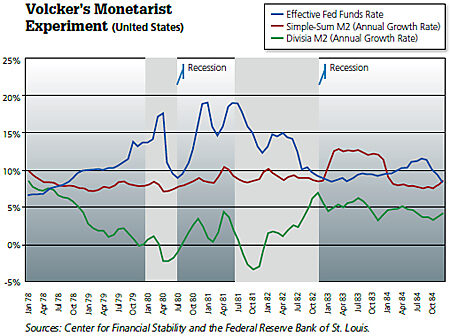 Chairman Volcker’s problem was that the monetary speedometer installed on his dashboard was defective — he was only looking at the conventional, simple‐​sum measures of the money supply. The Fed thought that the double‐​digit Fed funds rates it was serving up were allowing it to tap on the money supply brakes with just the right amount of pressure. In fact, if the money supply would have been measured correctly by a Divisia metric, Chairman Volcker would have realized that the Fed was slamming on the brakes from 1978 until early 1982, imposing a monetary policy that was much tighter than it thought (see the accompanying chart).

Why the huge divergences between the conventional simple‐​sum measures of M2 that Chairman Volcker was observing and the true M2 Divisia measure? As the Fed pushed the Fed funds rate up, the opportunity cost of holding cash increased. In consequence, savings accounts, for example, became relatively more attractive and received a lower weight when measured by a Divisia metric. Faced with a higher interest rate, people had a much stronger incentive to avoid “large” cash and checking account balances. As the Fed funds rate went up, the divergence between the simple‐​sum and Divisia M2 measures became greater and greater.

When available, Divisia measures are the “best” measures of the money supply. But, how many classes of financial assets thatpossess moneyness should be added together to determine the money supply? This is a case in which “the more the merrier” applies. When it comes to money, the broadest measure of money, Divisia M4, is the best. In the U.S., we are fortunate to have this available from the CFS. 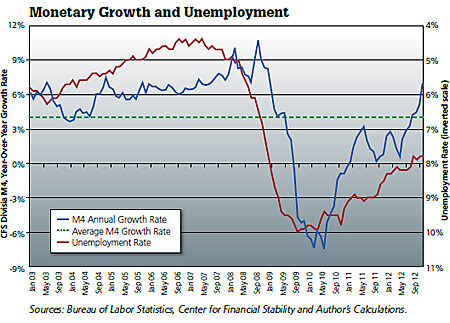 If we discard conventional wisdom and employ a broad Divisia M4 measure for the U.S., it appears that some green shoots are springing up. As the accompanying chart shows, Divisia M4 has recently moved up at a brisk pace and is growing at a relatively healthy rate (6.9% in December 2012). If the U.S. money supply keeps growing at this rate, I expect the U.S. economy to exit its growth recession and enter a period of trend‐​rate growth in 2013. With that more normal growth, unemployment will fall from its current elevated level of 7.8%.

Rethinking Basel III
Another bit of conventional wisdom has it that tightening regulations on bank capital and liquidity — the Bank for International Settlements’ so‐​called Basel rules — will make banks safer. Well, things haven’t worked out according to plan. As history has shown, more stringent Basel Rules place a damper on what I call “bank money” — the all‐​important portion of the money supply produced by banks, through deposit creation. If this squeeze is big enough, it can throw an economy into a slump.

In the U.S., and contrary to conventional wisdom, it was the imposition of the 1988 Basel I bank capital requirements that contributed mightily to the late 1990 U.S. recession. As banks hiked their capital‐​asset ratios, in compliance with Basel, they were forced to rein in loan growth. This caused bank money growth to slow. And, since bank money comprises the lion’s share of the total money supply, the rate of growth in the total money supply slowed dramatically, causing the economy to slide into a mild recession (see the accompanying chart). This same type of slow‐​down in bank money growth recently occurred in the United Kingdom, after the British Financial Services Authority announced — in advance of theBasel III mandates — that British banks would be required toincrease their capital‐​asset ratios (see the accompanying chart). 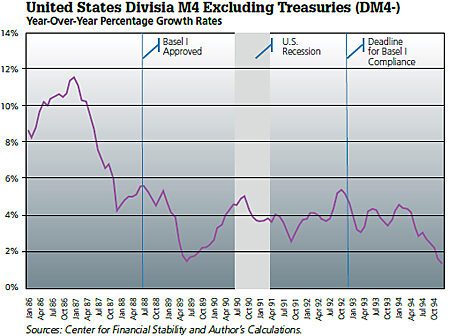 The embrace of conventional wisdom by the central bankers who vote on Basel rules has been one of the primary causes of the anemic economic recoveries in the U.S. and Europe. But, those central bankers finally saw the merits in my (and others’) critiques, and loosened up on one portion of the Basel rules — the Liquidity Coverage Ratio. A front page headline in the Financial Times of 7 January 2013, “Massive softening of Basel bank rules,” tells that tale.

This is important for 2013 because it suggests that the supply constraints on banks might be loosened a bit. In consequence, money supply growth in the U.S., for example, might just be sustained. This suggests a more robust growth picture for 2013. But, central bankers have the power to do more — by doing less. Indeed, if they were to scale back Basel’s capital‐​adequacy requirements, bank money growth would almost certainly kick into a higher gear, and total money supply growth rates would be sustained at current, or higher, rates. 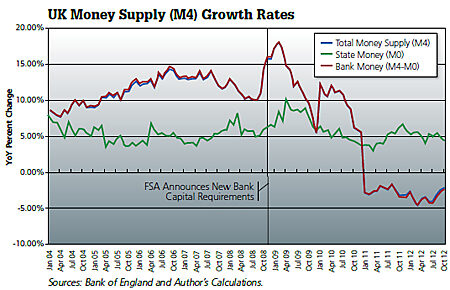 Rethinking the Fed’s Monetary “Stimulus”
Given all the attention that the Fed has garnered for its monetary “stimulus” programs, which have caused the supply of state money (M0) to explode, it’s perplexing to many that the U.S. has been mired in a credit crunch. After all, conventional wisdom tells us that these policies, which have lowered interest rates to almost zero, should have stimulated the creation of credit, and thus of bank money. This has not been the case — and I’m not surprised.

To understand the problem, we must delve into the plumbing of the financial system, specifically the loan markets. Retail bank lending involves making risky forward commitments. A line of credit to a corporate client, for example, represents such a commitment. The willingness of a bank to make such forward commitments depends, to a large extent, on a well‐​functioning interbank market — a market operating without counterparty risks and with positive interest rates. With the availability of such a market, even illiquid (but solvent) banks can make forward commitments (loans) to their clients because they can cover their commitments by bidding for funds in the wholesale interbank market.

At present, one of the major problem facing the interbank market is what Prof. Ronald McKinnon of Stanford University, in his new book, The Unloved Dollar Standard: From Bretton Woods to the Rise of China (Oxford University Press: 2013), dubs the “zero interest‐​rate trap”. In a world in which the risk‐​free Fed funds rate is close to zero, banks with excess reserves are reluctant to part with them for virtually no yield in the interbank market. As the accompanying chart shows, the interbank market has dried up — thanks to the Fed’s zero interest‐​rate policy — and, with that, banks have been unwilling to scale up or even retain their forward loan commitments. 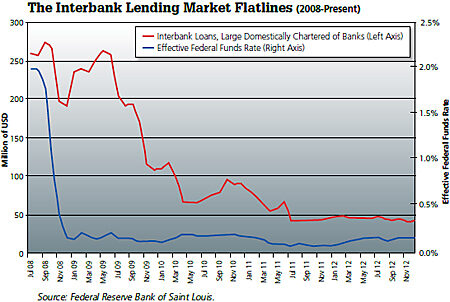 In short, the Fed’s zero interest‐​rate policy has exacerbated a credit crunch that has been holding back the economy. The only way out of this trap is for the Fed to abandon the conventional wisdom that zero‐​interest‐​rates stimulate the creation of credit. Suppose the Fed were to raise the Fed funds rate to, say, two percent. This would loosen the screws on interbank lending, and credit would begin to flow more readily to small and medium size enterprises. If this were to happen, we would see higher rates of growth in bank money, and thus in the total money supply.

So there you have it. Here’s to rethinking the conventional wisdom on the money supply, Basel III, and the Fed’s monetary stimulus. This just might lead to more positive 2013, at least in the United States.