The Punjab National Bank (PNB) is India’s second‐​largest state‐​owned bank. The PNB is now at the center of India’s biggest bank fraud on record. At present, the fraud’s tally is approaching $2 billion.

The affair started small enough—a mere $43 million. On January 29th, the PNB filed a criminal complaint against three companies and four individuals for an alleged fraud that had taken place at the Brady House PNB branch in Mumbai. The four alleged culprits included Nirav Modi, a high-flying jeweler who, according to Forbes Magazine, is worth $1.8 billion and is the 85th richest person in the world. Modi’s uncle, diamond-dealer Mehul Choksi was also one of the four named as alleged fraudsters.

In the course of a few weeks, the PNB turned over a few more stones, and updated its charges. In a February 14th filing, the amount of the alleged fraud had ballooned to $1.77 billion. With that, the tongues in Delhi began to wag; the Central Buerau of Investigation snapped to attention; the Reserve Bank of India went into a damage control mode; and the Finance Minister went into denial. And, Modi and Choksi are nowhere to be found. They and their families had taken the exit ramp out of India in early January. As they say in Hollywood (and perhaps Bollywood), they knew it was time to “get the hell out of Dodge.”

Even though Nirav Modi is missing in action, there is action. Indeed, one of Modi’s companies, Firestar Diamond, filed for bankruptcy in New York on Monday.

But, what about the Punjab National Bank? Like the other state-owned banks in India, it is marked by an amount of unscrupulousness, intrigue, and mystification, which is altogether unknown in Western Europe and the United States. So, just what do we know about the PNB’s health?

To answer the question, I took a look at the PNB’s books. And to conduct my diagnosis, I used a little-known but very useful formula to determine the bank’s health. It is called the Texas Ratio. It was used during the U.S. Savings and Loan Crisis, which was centered in Texas. The Texas Ratio is the book value of all non-performing assets divided by equity capital plus loan-loss reserves. Only tangible equity capital is included in the denominator. Intangible capital — like goodwill — is excluded.

The ratio measures the likelihood of failure by comparing a bank’s bad assets with its available provisions for bad loans plus its capital. When the ratio exceeds 100%, a bank does not have the capacity to absorb its losses from troubled assets. In consequence, it will either require a fresh capital injection, or it will fail.

The table below presents the PNB's Texas Ratio, which based on the PNB's most recent annual report. The PNB's Texas Ratio is rather low, indicating strength. Indeed, it probably understates PNB's strength, because the bank owns prime real estate and it is valued at cost. If that real estate were liquidated, significant capital gains would be realized. If this ship keeps sailing along with no changes or additional surprises, it will safely come into port. 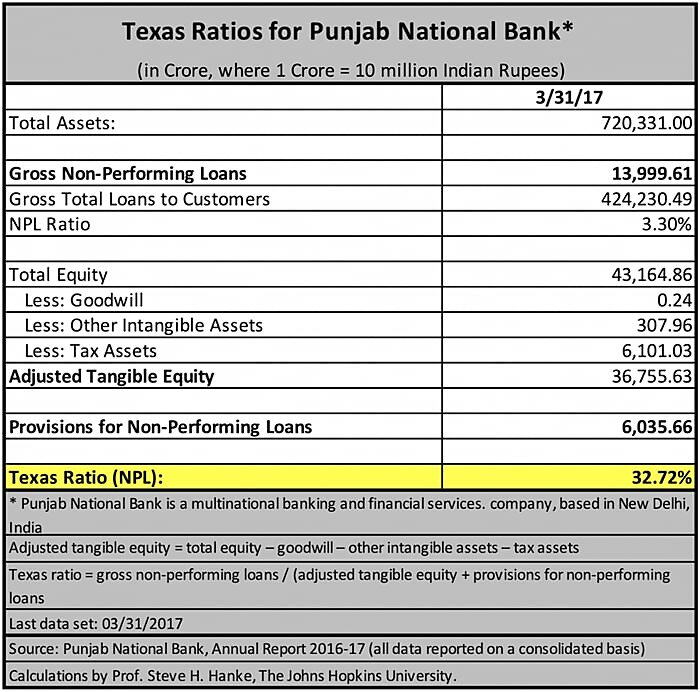 The PNB shares have shed 41.4% since the original filing of criminal charges (see the chart below). My analysis suggests that, if the PNB's financials are correct, this massive sell-off is overdone. 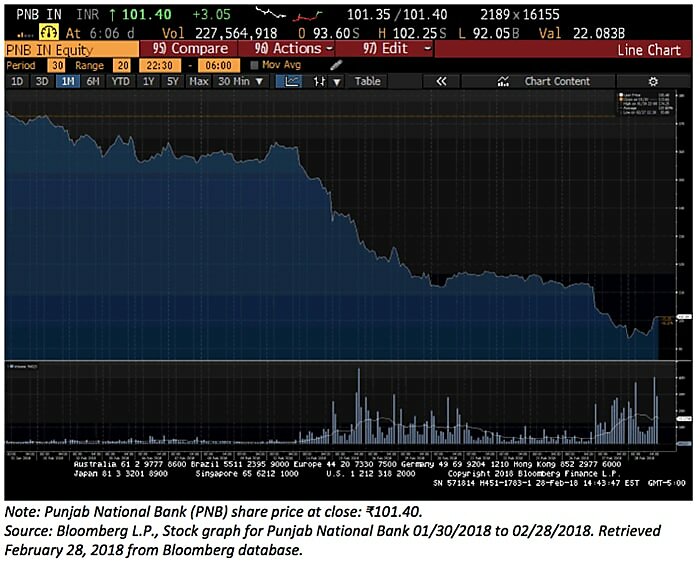