On Jan. 8, Judge Gloria M. Navarro of the Federal District Court in Las Vegas dismissed charges against Cliven Bundy and his sons Ammon and Ryan, as well as a supporter Ryan W. Payne. The case stemmed from a 2014 armed standoff at the Bundy ranch in Bunkerville, Nevada. The standoff arose over a dispute about government grazing fees, pitting the Bundys against federal officials.

The dispute would not have occurred if the proposal I developed for President Reagan when I served as Senior Economist on his Council of Economic Advisers had been implemented. The proposal was contained in the President’s Budget Message for 1983 fiscal year. In addition to Reagan’s endorsement, the proposal had the backing of one of the President’s best friends, who was none other than Senator Paul Laxalt of Nevada. Importantly, Laxalt knew the details of my proposal because we had spent a good bit of time together reviewing and fine‐​tuning it. For Reagan, Laxalt’s “thumbs up” was important. That’s why the privatization of public lands received “top billing” in the President’s budget message.

Here’s some of what Senator Laxalt had to say in a five‐​page press release titled “Senator Laxalt on the Sale of Public Lands” (April 16, 1982):

Before we proceed any further, let me tell you where I stand. I believe a need does exist to sell some of our excess public lands. However, I intend to do all in my power to protect existing public land users from being “locked out.” To this end, I endorse a proposal developed by Dr. Steve Hanke, a senior economist on the President’s Council of Economic Advisors, that deals with the protection of existing grazing rights which, I believe, can serve as a model for protecting miners as well. Basically, Dr. Hanke has proposed that ranchers currently holding grazing permits be given the right to purchase, on a first refusal basis, the public grazing permits that they currently rent from the BLM.”

Now, I present the economic logic and details of my proposal — a proposal that should be dusted off and implemented today.

Until the passage of the Taylor Grazing Act in 1934, the public domain was operated as a large commons. Since the Act, a more orderly method of utilization has been in effect. For the right to use public grazing lands, which cover approximately 155 million acres, ranchers must acquire grazing permits. To obtain these permits, ranchers must pay annual rents to the U.S. Government. By custom, the grazing permits, which number approximately 24,500, are attached to specific parcels of private land.

The linkage, through the capitalization process, between the market for public permits and that for private land has important implications. With the exception of those who obtained the original permits, all ranchers have had to pay two prices for their public permits — a public price, in the form of an annual grazing fee, and a private price, in the form of a premium for their private land.

To privatize public grazing lands and transfer public grazing permits (surface rights) to private ranchers on an equitable basis, a lump-sum amount should be charged to ranchers. This charge should be set so that it is equivalent, in present value terms, to the amount that the U.S. government would receive in grazing fees over time if the government retained title to the lands and continued to charge an annual grazing fee or rent. In effect, the government would be put in a position in which it is indifferent between receiving a lump-sum payment today or a stream of annual rents over time. Moreover, ranchers would be charged for only that portion of the permits' value that had not already been paid for through premiums for private land.

This can be accomplished in the following manner. Each rancher could be given an option to purchase, on a first-refusal basis, the public grazing permits that he now rents from the government. The first-refusal price would be set by capitalizing the annual grazing fees (an annual average paid over the past five years in 1982 dollars) that the rancher has paid (note: all of the figures used are the same as those contained in my original 1982 proposal).

The following concrete example shows how to compute the first-refusal price. The ranch in question is operated as a single unit. However, its lands are distributed in the following ownership pattern: 4,816 acres are privately owned; 8,333 acres are owned by the state government; and 1,520 acres are Section 15 lands, which are owned by the federal government. Our purpose is to calculate the first-refusal price for the federal lands. The following table summarizes the steps required to make this calculation. 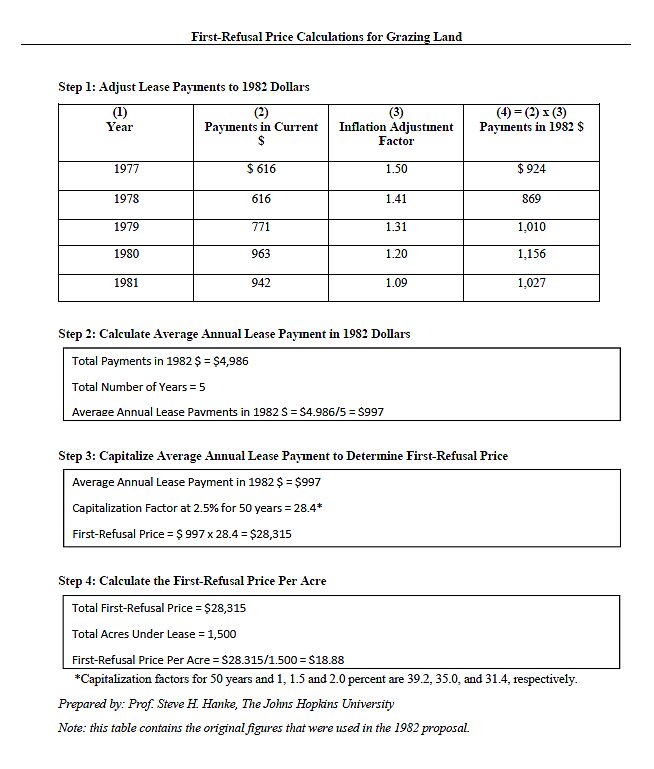 The question now is: what would be the benefits associated with this privatization proposal?

First, the productivity of federal grazing lands would increase.

Second, federal revenues would be generated. Instead of receiving annual grazing fees, the federal government would receive an equivalent lump-sum payment.

Lastly, a state and local property tax base would be created. Western dependence on Washington, D.C. would be reduced and federalism would be enhanced.