Two widely cited recent works by Robert Gordon (“Is US Economic Growth Over? Faltering Innovation Confronts the Six Headwinds”) and Tyler Cowen (The Great Stagnation) suggest that US economic growth is over, since there are few innovations in the offing and those of the last few decades — based on IT, genomics and biotechnology, the third industrial revolution — are less important than those at the end of the 19th and early parts of the 20th century. In terms of increased labour productivity, current innovations are unlikely to match those of the first industrial revolution of the 19th century, which was based on the steam engine and the railroad. Nor can they match the levels reached in the second industrial revolution of 1870–1900, which was based on inventions such as electricity, indoor sanitation, the automobile, chemicals, petroleum and the airplane.

Professor Gordon’s main evidence for his pessimistic view about future US growth is that labour productivity — and therefore per capita income — in that country grew much more slowly after 1970 than from 1890 to 1970 (see graph). Hence, he notes, since during most of history there was virtually no growth in world per capita income till the first industrial revolution, perhaps we are reverting to this norm — with the three industrial revolutions being the exception. The classical economists’ “stationary state” will once again be with us. As Professor Cowen argues, America has “eaten all the low‐​hanging fruit” from its past inventiveness.

I find these views profoundly mistaken. The trouble lies in the vision of the growth process that economists have come to have on the basis of the aggregative neoclassical growth model, named after its progenitors Robert Solow and Trevor Swan. Within this framework, output growth was to be explained by increases in the basic inputs of capital and quality‐​adjusted labour. But when this framework was applied to the US and other advanced economies in so‐​called “growth‐​accounting”, it appeared that these economic inputs accounted for just over half of the observed output growth. The remainder, or the “residual” of the unexplained part, came to be attributed to exogenous technical progress.

The Washington Consensus is still the best way to promote sustained growth.

In the so-called "steady state" of these models, the growth rate of the economy would, moreover, be dependent only on the growth rate of the quality-adjusted labour force and the rate of exogenous technical progress. Demography and inventions would be all. For poor countries, with their level of per capita income and capital per worker below those of the advanced countries, raising their capital per worker through investment towards that of the advanced countries would allow them to grow faster than the advanced countries for a while on their "traverse" to the steady state, when their capital per head and income per capita would equal that of advanced countries. Thereafter, they will also find that only exogenous labour force growth and technical progress would affect their steady-state growth rate. This technological determinism underlies Professors Gordon and Cowen's currently fashionable growth pessimism.

Troubled by the implication that the rate of investment cannot affect the steady-state rate of growth, theorists have developed so-called "endogenous" growth models. They assume that externalities to investment in physical and human capital influence the pace of technical progress, and thence the steady-state rate of growth. But there has been no convincing empirical evidence for these externalities.

A different vision of the growth process has been provided by two of my mentors: UCLA colleague Arnold Harberger ("A vision of the growth process", American Economic Review, March 1998) and my late Oxford tutor Maurice Scott (A New View of Economic Growth). Both came to their alternative visions through the development and application of cost-benefit analysis to investment projects in developing countries (on which I also spent a part of my misspent youth). Both see the growth process through the eyes of the firms that make up the economy. Both were influenced by firm-level studies of investment and invention by Jacob Schmookler (Invention and Economic Growth) and Edwin Mansfield (The Economics of Technical Change), who argued that "the prospective profitability of an invention was the main determinant, in most cases, of its birth and survival". This does not undermine the importance of the growth of basic scientific knowledge. But that in itself does not determine which profitable inventions will arise. This depends on a whole host of economic factors. 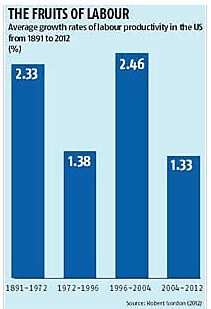 The best way to see this from the alternative "bottom-up" view of the growth process is to follow the Harberger model, rather than the more elaborate Scott one. Professor Harberger defines the "residual" or "total factor productivity" (TFP) as "real cost reductions" (RCR) — or, in the case of negative TFP, "real cost increases" (RCI) — which occur at the level of the firm, but which can be readily aggregated to the industry or economy level. What emerges at the firm and industry level from this RCR accounting in studies done by his UCLA students is similar to what appears in the stock market pages of newspapers: "There are winners and losers every day, every month, and every year. The gains and losses come for all sorts of [economic] causes." The picture is analogous to Joseph Schumpeter's vision of "creative destruction", which says, "yes, it's a jungle out there, but the processes of that jungle are at the core of the dynamics of a market-oriented economy. They are what got us to where we are, and they hold the best promise for further progress in the future" (Harberger).

And what are the policy implications of this alternative vision? It is to enable the process of RCR and to inhibit that of RCI by broadly following the package known as the Washington Consensus. Despite recent claims that the "Beijing consensus" has now become the best means to promote growth, there is little merit in these views (see my "Is the Washington Consensus dead?" Cato Journal, 2012). Good economic policy, not technological determinism, will determine the growth rates of rich and poor countries in the future, as it has in the past.