Andy Hall, the “Oil God,” acquired that attribution after making flawless, bullish calls on oil and loads of cash for his clients at Astenbeck Capital Management. Of late, the markets have failed to cooperate with Hall. So, he has renounced his bullish faith. Indeed, the Oil God has thrown in the towel on what had been his perma‐​bullish position on oil.

I must confess that I analyzed the oil market a year ago, and came to almost exactly the same conclusion that Andy Hall held. Back in June 2016, my oil‐​gold ratio model forecasted that oil (WTI) would be $65/​bbl by July 2017 and $70/​bbl at the turn of the year. Well, we haven’t seen those prices yet. Indeed, WTI sits just shy of $50/​bbl today and has been stuck in a trading range for some time—with it never going above $54.47/bbl, a price that occurred way back in February. It’s time to ask, why Hall and I got the oil‐​price bounce‐​back right, but were too bullish on the trajectory of prices? To answer the question, I recently re‐​ran (read: re‐​calibrated) my oil‐​gold ratio model.

To answer that question, one has to have a model — a way of thinking about the problem.

So, where is the price of oil going from here? To answer that question, one has to have a model — a way of thinking about the problem. In this case, my starting point is Roy W. Jastram’s classic study, The Golden Constant: The English and American Experience 1560-2007. In that work, Jastram finds that gold maintains its purchasing power over long periods of time, with the prices of other commodities adapting to the price of gold. Taking the broad lead from Jastram, I use the price of gold as a long-term benchmark for the price of oil. The idea being that, if the price of oil changes dramatically, the oil-gold price ratio will change and move away from its long-term value. Forces will then be set in motion to move supply and demand so that the price of oil changes and the long-term oil-gold price ratio is reestablished. This is nothing more than a reversion to the mean.

I begin my analysis of the current situation by calculating the oil-gold price ratios for each month. For example, in June 2014, oil was at $107.26/bbl and gold was at $1314.82/oz, yielding an oil-gold price ratio of 0.082. The ratios for two separate periods are represented in the accompanying histogram — one starting in 1946 and another in 1973 (the post-Bretton Woods period). 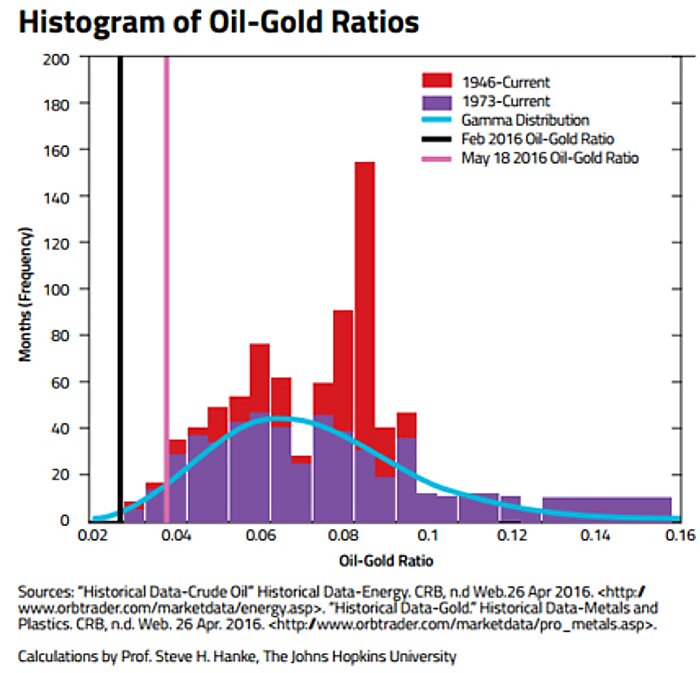 But, how long will it take for the ratio to mean revert? My calculations (based on post-1973 data) are that a 50 % reversion of the ratio will occur in 13.7 months. This translates into a predicted price per barrel of WTI of $45.84 by the end of July 2017. The accompanying chart shows the price projection based on the oil-gold price ratio model. It also shows the historical course of prices. It is worth noting that, like Jastram, I find that oil prices have reverted to the long-run price of gold, rather than the price of gold reverting to that of oil. So, the oil-gold price ratio reverts to its mean via changes in the price of oil.

So, what about Andy Hall's new normal? The oil-gold ratio model predicts that the WTI price will sit at $55.53/bbl at year end. This is about where Andy Hall has set his revised forecast and $4.50/bbl above where WTI for December delivery is trading today. The Oil God lives. 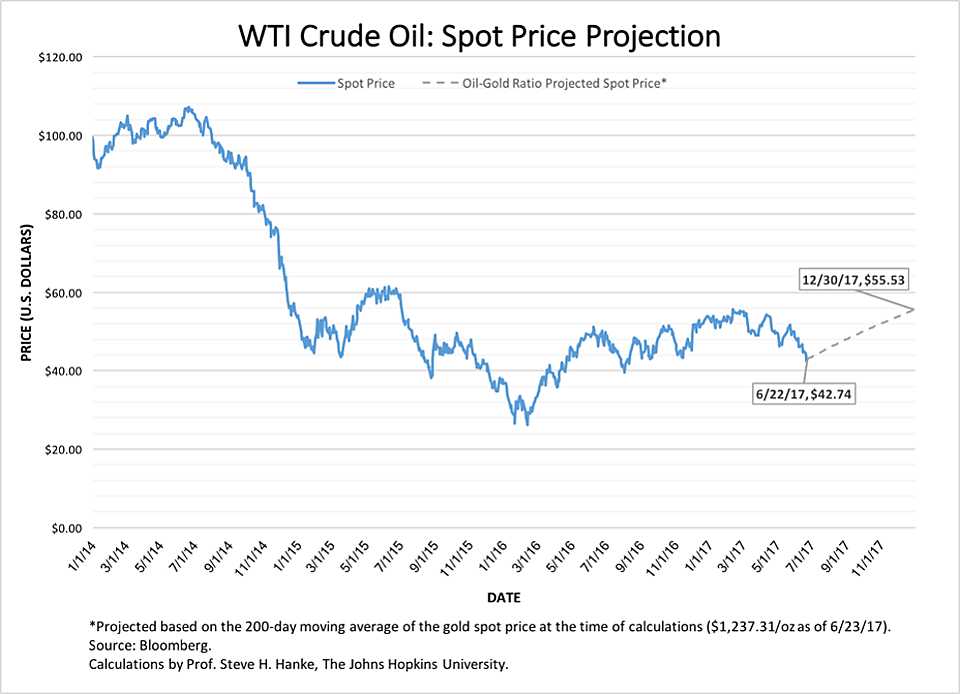