Skip to main content
Live Now
This article appeared on Forbes​.com on May 5, 2014.
TOP

Two of the most controversial questions in health care reform are whether government‐​sponsored expansions of health insurance coverage like ObamaCare and RomneyCare save lives, and if so whether other policies could save more lives per dollar spent. “Changes in Mortality After Massachusetts Health Care Reform,” published today in the Annals of Internal Medicine, presents evidence suggesting RomneyCare may have saved lives, but at a very high cost.

Conducted by Benjamin Sommers (Harvard University), Sharon Long (Urban Institute), and Kate Baicker (Harvard University), this study compares Massachusetts counties to similar counties in the United States before and after the enactment of RomneyCare in 2006. Consistent with similar studies, the authors found that when RomneyCare expanded health insurance coverage, consumption of medical services increased. They also find that relative to the rest of the country, mortality among adults age 20-64 in Massachusetts dropped by 2.9 percent, while mortality from causes treatable by medical care fell by 4.5 percent. The below chart shows how mortality rates in Massachusetts diverged slightly from the control group starting in 2006. 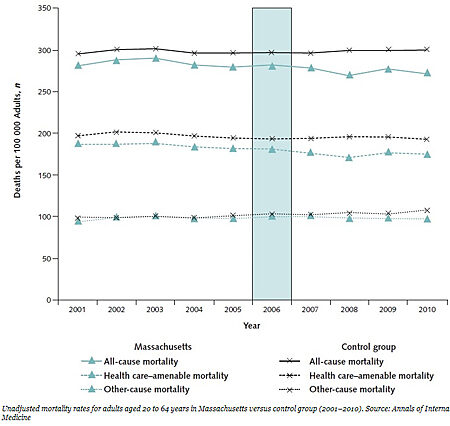 As one might expect, most of the reduction in mortality occurs among those age 35-64.

This study adds to the body of knowledge on the health effects of government-initiated coverage expansions. A randomized, controlled study called the Oregon Health Insurance Experiment failed to detect any improvement in measured physical health outcomes after Oregon expanded its Medicaid program, but the study has been criticized for being too small to notice such effects. Larger but less well-controlled studies like this one have found that expanding Medicaid is associated with health improvements. The most important feature of that literature is how sparse it is.

But there are likely to be policies out there that could save a lot more lives than RomneyCare does per dollar spent.

This Annals of Internal Medicine study is more like the latter Medicaid study. While its sample size is large, the authors caution, “we do not have individual‐​level insurance information and thus cannot directly link mortality changes to persons gaining insurance coverage” and “our quasi‐​experimental approach cannot definitively demonstrate a causal relationship underlying the association between the Massachusetts reform and the state’s declining mortality relative to other states. It is possible that the post‐​reform reduction in mortality in Massachusetts was due to other factors that differentially affected Massachusetts, such as the recession.”

Nevertheless, this study does suggest RomneyCare has saved lives. I certainly hope it has.

Even if so, however, this Annals study also suggests that success has come at a very high cost. The authors estimate that “for approximately every 830 adults who gained insurance [under RomneyCare], there was 1 fewer death per year.” If we assume the per‐​person cost of covering those 830 adults is roughly the per‐​person premium for employer‐​sponsored coverage in Massachusetts in 2010 (about $5,000), then a back‐​of‐​the‐​envelope calculation suggests that RomneyCare spent $4 million or more per life saved. The actual figure may be much higher if we include other costs incurred by that law. The World Health Organization considers a medical intervention to be “not cost‐​effective” if it costs more than three times a nation’s per‐​capita GDP per year of life saved. This in turn suggests that RomneyCare would have to give every person it saves an average of nearly 30 additional years of life to meet the World Health Organization’s criteria for cost‐​effectiveness. Given that the mortality gains were concentrated in the 35–64 group, that seems like a stretch.

As an economist might put it, this means there are likely to be policies out there that could save a lot more lives than RomneyCare does per dollar spent.

Or as Sarah Palin might put it, even if RomneyCare saved as many lives as this study suggests, it still probably deserves to be death‐​paneled.