Parents often rank school safety at the top of the list of what they care about most when it comes to their children’s schooling. Recent events have increased concerns among parents and school leaders and may even suggest that some schools are struggling to keep children safe. Many people have called for heightened security measures such as arming teachers, mandating clear backpacks, and stationing more officers in schools.

Perhaps there’s another solution, one that doesn’t potentially create a stressful environment for students.

What if some types of schools are safer than others? Is it possible that school choice could improve school safety? Our just-released study suggests it might.

Using survey data from Indiana in 2018, we examined the relationship between school type and the presence of a set of 13 school safety-related practices, including controlled access to the campus and buildings, metal detectors, uniforms, student identification badges, and the presence of security personnel.

For example, as shown in Figure 1 below, private school leaders in Indiana are about 18 percentage points more likely to report never having student physical conflicts than traditional public school leaders. The results are not statistically significant for the remaining five outcomes. 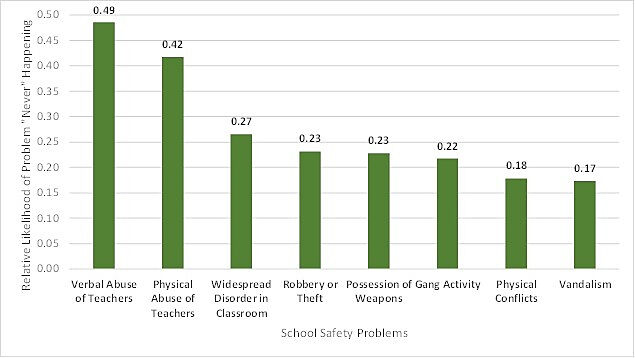 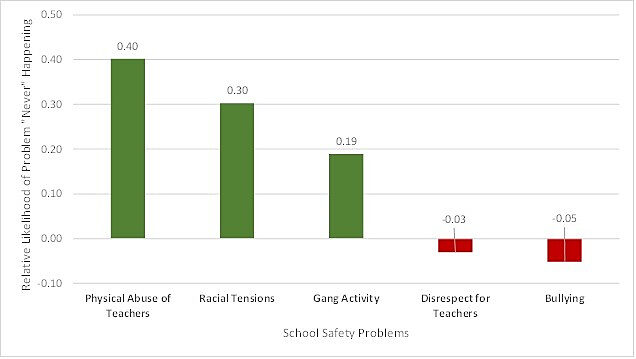 Notes: All estimates reported in figure are statistically significant at the 90% level of confidence. Full results are reported in table 8 of the paper. These estimates are from models that control for school characteristics (level, total enrollment, number of minority students, number of students eligible for the national free and reduced-price lunch program, number of English language learners, number of minority teachers, number of full-time teachers, urbanicity, suspensions, expulsions, and school safety practices) and respondent characteristics (race, gender, position, and income).

We find evidence of private and public charter school safety advantages, even though traditional public schools tend to use more school safety practices (Table 5 in the full report). On five out of seven statistically significant measures, private schools are less likely than traditional public schools to control access to school grounds, perform random metal detector checks, use random dog sniffs for drugs, use security cameras, and have security personnel on campus.

Our data allow us to examine this question using another quality proxy: school safety.

Our study has its limitations. While we controlled for several student, school, and respondent characteristics, students might differ on unobservable characteristics (such as motivation) across school sectors. Because all of our outcomes are reported by school leaders, they might not accurately reflect the amount or degree of problems within schools. In addition, survey response rates differed across the three sectors, and our results only apply to schools in Indiana.

Given these limitations, results from our study suggest that private and public charter schools may be safer than traditional public schools in Indiana. In light of these results, and the fact that school safety typically places at the top of list of what parents care about when it comes to their children’s schooling, school choice should definitely be a part of the ongoing conversation about school safety.