What President Trump and his team of protectionists must learn is that these two headlines are interconnected — joined at the hip. If the government runs a big fiscal deficit, the U.S. will run a big trade deficit. Alas, this fact has never crossed President Trump’s mind.

President Trump, and most in his administration, believe that the U.S. trade deficit is a “bad” thing caused by foreigners who engage in unfair trade practices. For them, the solution is U.S. imposed tariffs and other anti-trade measures. Our trade deficit is made in the good, old U.S.A., not by foreigners engaging in “unfair” trade practices. Tariffs will not change the overall U.S. trade balance.

How could this be? In economics, identities play an important role. These identities are obtained by equating two different breakdowns of a single aggregate. In national income accounting, the following identity can be derived. It is the key to understanding the trade deficit.

Given this identity, which must hold, the trade deficit is equal to the excess of private sector investment minus savings, plus government spending minus tax revenue. So, the counterpart of the trade deficit is the sum of the private sector deficit and the government deficit (federal + state and local). The U.S. trade deficit, therefore, is just the mirror image of what is happening in the U.S. domestic economy. If expenditures in the U.S. exceed the incomes produced, which they do, the excess expenditures will be met by an excess of imports over exports (read: a trade deficit).

The table below shows that U.S. data support the important trade identity. The cumulative trade deficit the U.S. has racked up in the 1975-2016 period is about $11.154 trillion, and the total investment minus savings deficit is about $10.435 trillion. 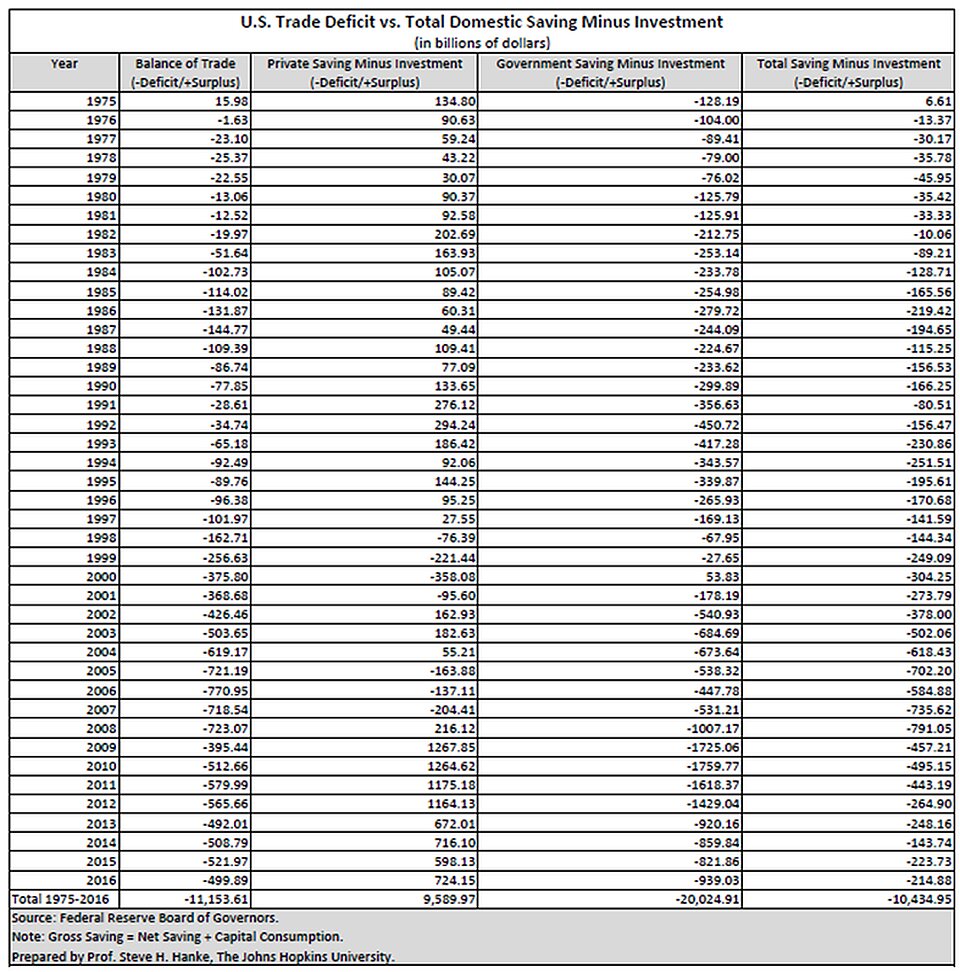 So, President Trump can bully countries he identifies as unfair traders, he can impose all the restrictions on trading partners that his heart desires, but it won’t change the trade balance. Never mind the fact that most economists think President Trump’s ideas on trade are rubbish. When it comes to trade, Trump is the master of the message and the optics. In consequence, his base is with him on trade, and so are a surprising number of others.

The problem is that Trump’s trade rubbish is tailor-made for delivery on Twitter and television. Indeed, those media outlets are suitable for “sound bites,” but not for complex arguments and data points.

That’s why economics is at a disadvantage when it comes to Trump’s favorite media. Nevertheless, this is what economics has to say about the trade deficit bugaboo. First, it is not a “problem.” Indeed, the U.S. has run a trade deficit every year since 1976, and the U.S. has done relatively well since then. The sky didn’t fall because of our trade deficit. Secondly, the trade deficit is not made by foreigners who engage in unfair trade practices. It is homegrown—made in the U.S.A. To the extent that domestic savings in the U.S. falls short of domestic investments, the economy must import more than its exports, resulting in a negative trade balance.

It’s time for President Trump to connect the dots and get real on trade.