Larry Kudlow, the new White House economic czar and the former director of the National Economic Council, and I go back many moons. We collaborated countless times during President Reagan’s first term. Larry was the associate director for economics and planning at the Office of Management and Budget (OMB), and I was a senior economist at the Council of Economic Advisers (CEA). Our offices were at opposite ends of the Old Executive Office Building. Back then, Larry chain‐​smoked cigars, and I preferred a pipe. We have both since dropped those deadly habits. Never mind.

As for working style, Larry appeared to be laid back. I stress the words “appeared to be.” He was always on top of the battles and the larger war. Indeed, Larry knew when to call in the CEA cavalry and other troops. In my experience, Larry was always informed and effective.

So when I read Yale management guru Jeff Sonnenfeld’s assessment of Kudlow’s suitability for his new challenges, I was in agreement. The title of Sonnenfeld’s interview with Patrick Gorman says it all: “Sonnenfeld: Larry Kudlow A ‘Perfect Fit’ For NEC Chairman.”

That said, Kudlow will have his work cut out for him, particularly when it comes to the Trump administration’s views on international trade. Kudlow favors free trade. Trump, his cabinet and his trade experts all favor protectionism, or as they euphemistically refer to it, “managed trade.” Indeed, the Trump administration’s most recent salvo is aimed at China. Trump’s anti-China measures include tariffs on at least $30 billion worth of Chinese imports. And if that’s not enough, the president has stated that he wants China to slash its bilateral trade surplus with the U.S. by $100 billion.

President Trump, like most businessmen, fails to understand the most basic fundamental points about international trade and what causes overall trade deficits and surpluses. So on international trade, Kudlow has a huge problem — one he never had with Reagan. After all, Reagan was, at least rhetorically, a free trader.

Kudlow’s first tutorial with Trump will be the key. If Kudlow fails to open that first door, he will fail on trade, and trade wars will ensue. When that happens, regime uncertainty will increase, and confidence will plunge. Game over.

So just what is the first lesson on trade that Kudlow must deliver? It should be titled “The Overall U.S. Trade Balance Is Made In The U.S.A., Not By ‘Unfair’ Foreign Trade Practices.” The economic identity that forms the foundation for this lesson in international trade is:

The table below shows that U.S. data support the important trade identity. The cumulative trade deficit the U.S. has racked up since 1975 is about $11.154 trillion, and the total investment minus savings deficit is about $10.435 trillion. 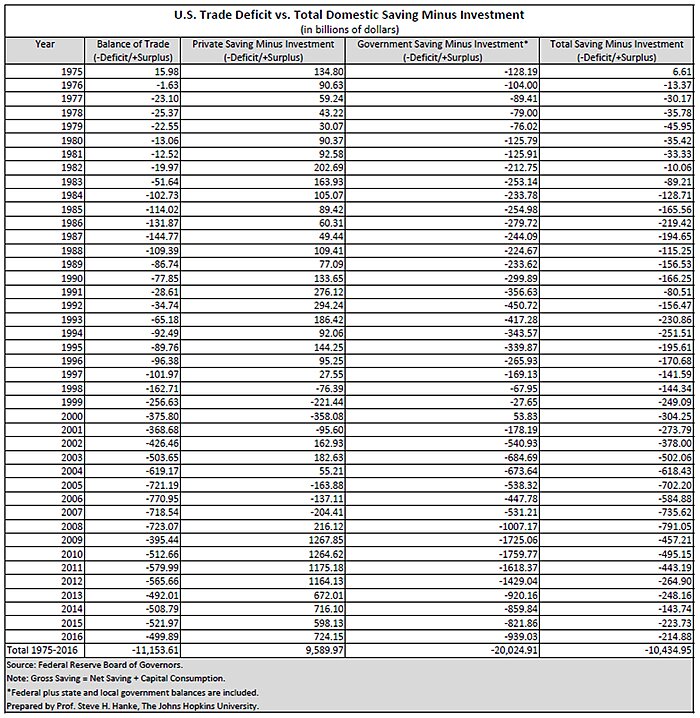 So U.S. trade deficits are not caused by “unfair” trade practices. They are made in the good old U.S.A.

Armed with the above table, Kudlow should make it clear that the imposition of anti-China tariffs or the brow beating of Chairman Xi might reduce the U.S. bilateral trade deficit with China, but it will not alter the overall U.S. trade deficit. Indeed, if China is forced to reduce its bilateral trade surplus with the U.S., then others will supply what the U.S. consumers and investors demand. Yes, others will accommodate the U.S. overall trade deficit that is dictated by the trade identity.

The only effective way for Trump to exorcise his demon (read: the overall U.S. trade deficit) would be for him to reduce the U.S. fiscal deficit (see the identity above). But ironically, President Trump’s policies are projected to increase the fiscal deficit, which will result in a larger trade deficit.