Skip to main content
Live Now
This article appeared in the May 2014 issue of Globe Asia.
TOP

The Great Recession grinds on. And as it does, politicians of all stripes ask, usually behind closed doors, “Just how miserable are our citizens?” The chattering classes offer a variety of opinions. As it turns out, there is a straightforward way to measure what is termed the misery index.

The late Arthur Okun, a distinguished economist who served as chairman of the President’s Council of Economic Advisers during President Johnson’s administration, developed the original misery index for the United States. Okun’s index is equal to the sum of the inflation and unemployment rates.

The misery index pours cold water on the current critique of free markets and fiscal austerity.

Harvard Professor Robert Barro amended the misery index by also including the 30-year government bond yield and the output gap for real GDP. Barro used his index to measure the change in misery during a president's term.

From these metrics, we would anticipate that if there were a high level of misery in a country, and the current politicians increased the level of misery, then this increase would be borne out by looking at the polls. In other words, we expect citizens to be aware of misery, and approve or disapprove accordingly.

The data in the misery index chart speak loudly. Contrary to left-wing dogma, the Reagan "free-market years, " were very good ones. And the Clinton years of Victorian fiscal virtues– when President Clinton proclaimed in his January 1996 State of the Union address: "the era of big government is over" — were also very good ones. 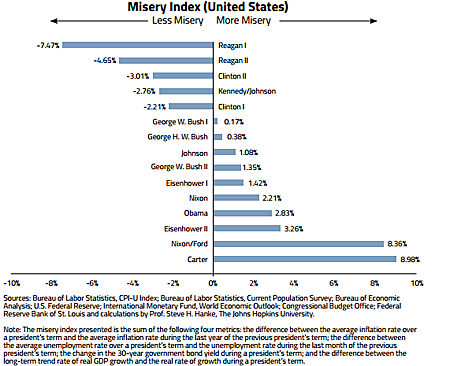 The misery index pours cold water on the current critique of free markets and fiscal austerity — a critique that has taken on the characteristics of a religion embraced without investigation. Indeed, it makes one bothered to subject their ideas to a reality check.

But does the misery index accurately measure misery? Well, when looking at the relationship between a president's approval ratings and the misery index, the truth comes into sharp relief. If the economy is doing poorly during a president's term, the likelihood for this president to have a low approval rate is high, and vice versa (correlation of -0. 54). By examining the misery index ranking in the United States and the poll ratings of U. S. Presidents (compare the first two charts), the correlation becomes apparent.

For most people, their quality of life is important. Constituents prefer lower inflation rates, lower unemployment rates, lower lending rates, and higher GDP per capita. By combining the poll rankings and the misery index, we calculate a standardized ranking from one president to another. This type of analysis is not limited to the United States. The misery index concept can be applied to any country where suitable data exist. A misery index — a simple sum of inflation, lending rates, and unemployment rates, minus year-on-year per capita GDP growth — is used to construct a ranking for 89 countries. 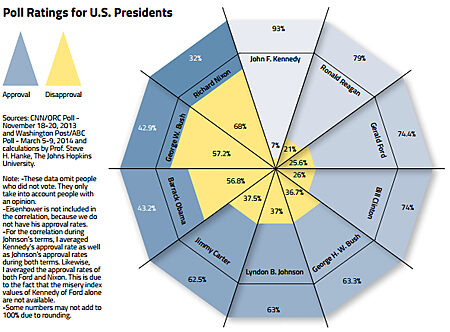 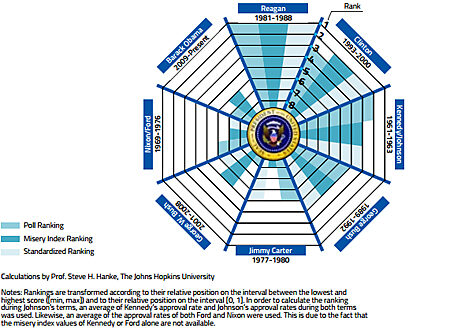 And that's not the end of the story. Indeed, with binding price controls, many goods in the official price index basket are nowhere to be found. And when it comes to price-control induced shortages, there is no better authority than Milton Friedman:

The accompanying chart confirms Friedman's observation. In Venezuela, 28% of basic products are not available. 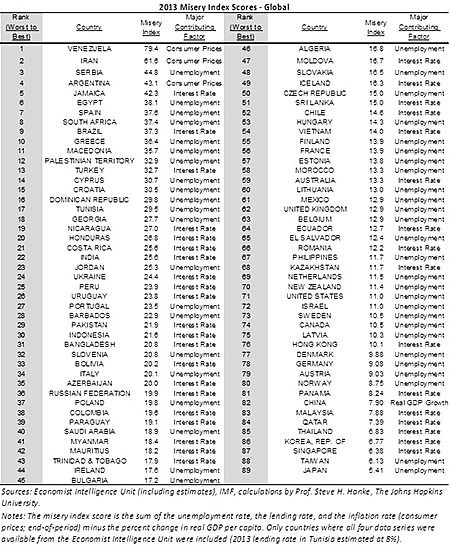 When price controls and shortages prevail, how do we measure the true rate of inflation — "open" inflation? 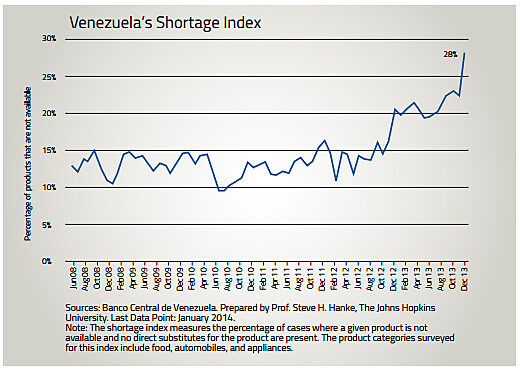 One way to estimate the rate of true, open inflation, in cases such as Venezuela's, would be to track down the free-market prices — including the black-market prices — for all goods in the official basket. But such a procedure would be very difficult, if not virtually impossible, to implement. That is why no country has ever accomplished such a herculean task.

By using the most important free-market price in Venezuela — the black — market bolivar / U. S. dollar rate — we can accurately estimate Venezuela's annual open inflation rate (see the accompanying chart). At the end of 2013, this true, open inflation rate was five times higher than the official rate. And the associated true misery index was 301, not 79. 4. 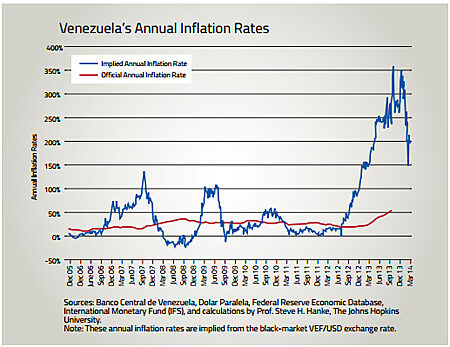 It's not surprising that President Maduro's popularity has plunged 16 percentage points since he took office in April 2013. And if that wasn't bad enough, politically-motivated street violence has claimed 39 lives since mid-February 2014.