After Bulgaria took the exit from Communism in 1990, Bulgarians encountered some potholes. The economy plunged, there were debt defaults, and that Balkan paradise experienced hyperinflation, peaking at an astounding 242% per month in February 1997. Yes, that’s per month.

Anticipating many of the potholes that accompany an unsound currency, I co‐​authored a book with Kurt Schuler, Teeth for the Bulgarian Lev: A Currency Board Solution (1991). It was, in short, a blueprint for ensuring that Bulgaria’s currency, the lev, would become sound — a clone of an anchor currency, such as the U.S. dollar or German mark at that time.

Bulgarians know from their experience that everything is nothing without stability.

Mrs. Hanke and I visited Sofia, the capital, several times after the book was published. Even though our ideas generated genuine interest in certain circles, the official response was negative. The oft-repeated refrain of the former governor of the Bulgarian National Bank, the late Todor Valchev, was typical: Thank you for your interest in Bulgaria and your proposal, but we know the realities of the local situation and have everything under control.

Once hyperinflation broke out in 1996, that refrain rang hollow, and things began to change rapidly. In December 1996, the Bulgarian ambassador to the U.S. requested that I present my currency board system ideas in Washington, D.C. In the same month, a pirated version of the Hanke-Schuler 1991 book was translated into Bulgarian; it reached the top of the best-seller list in Sofia. In late February, Mrs. Hanke and I traveled to Sofia once again, and President Petar Stoyanov invited me to become his adviser. My initial tasks were to draft a currency board law for Bulgaria, and to explain to Bulgarian politicians and the public how such a system would halt hyperinflation.

Things moved rapidly. There's nothing like a crisis to move the ball down the field. The currency board was installed on July 1, 1997. Inflation and interest rates plunged immediately. I can recall the genuine pleasure (perhaps relief, too) that President Stoyanov displayed when he congratulated me on the outstanding results produced during the first few weeks of the currency board. It was then that he confessed his hope that the currency board would kill inflation, but that he had reservations, and he was amazed when it worked even more rapidly than I had predicted. Much later, President Stoyanov confided that, without the stability created by the currency board system, Bulgaria would have had much more difficulty entering the North Atlantic Treaty Organization (NATO) in 2004 and the European Union in 2007.

Today, the Bulgarian population strongly supports the currency board and opposes dumping the lev for the euro. And why not? After all, the currency board is the most prized post-communist institution in Bulgaria. It has delivered stability. And while stability might not be everything, Bulgarians know from their experience that everything is nothing without stability.

Now, President Boyko Borisov has floated the idea that the currency board and the lev should be mothballed and put in a museum. This would be a bad decision. Here's why:

1. Bulgaria's currency board allows Bulgaria to issue its own currency that trades at a fixed exchange rate with the euro, is fully backed by euro reserves, and is fully convertible into and out of euros. These features mean that the lev is a clone of the euro, and that Bulgaria is already a part of a unified euro currency area, without being formally part of the so-called Eurozone. So forget all the chatter about whether Bulgaria is ready to formally join the Eurozone. Bulgaria is already informally a member.

2. Bulgaria's currency board has been very successful: 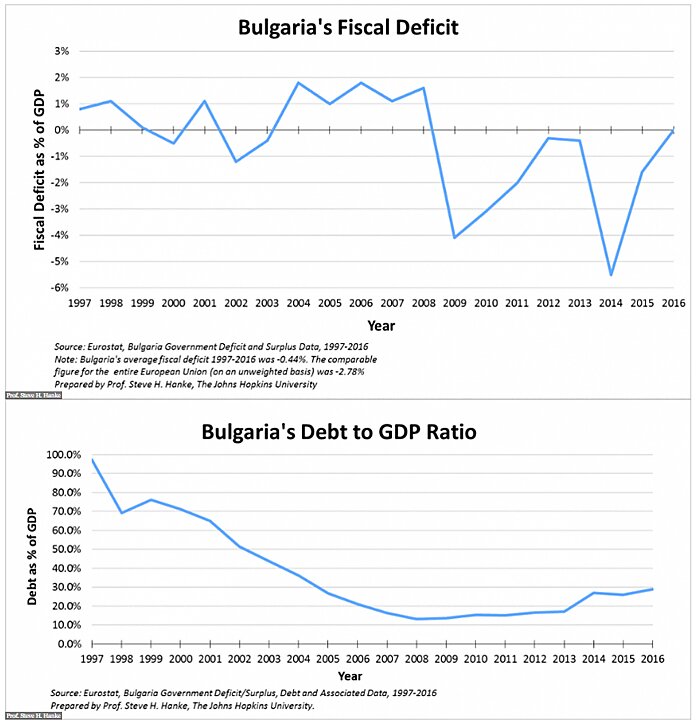 3. Why would anyone want to try to fix something that is not broken? No smart person would attempt to do so. Given the polling data that indicate that Bulgarians have given a collective “thumbs down” to the idea of abandoning their beloved lev and replacing it with the euro, it is clear that the Bulgarian populace is smarter than the Bulgarian political class.

4. The Bulgarian populace knows that by formally joining the Eurozone, Bulgaria would give up its sovereignty over its monetary system. This sovereignty is valuable, particularly if the euro gets in trouble. If that happens, Bulgaria can immediately switch to a superior anchor currency without asking for any other country’s or organization’s permission.

5. Why would any sane person want to join and be locked into a club whose very future is uncertain? Formal entry into the Eurozone would be like checking into the Eagles hit “Hotel California.” As the Eagles’ lyrics put it, “you can check out anytime you like, but you can never leave.” At this time, the only country that could check into and then check out of the Eurozone is Denmark. It has obtained a valuable opt-out option, something Bulgaria does not have and will never obtain.

6. Why would anyone want to give up known rules of the road and fiscal discipline for a moral hazard that encourages bad fiscal behavior — like that of Greece? Interestingly, maybe that is exactly what some Bulgarian politicians who advocate formal membership in the Eurozone are dreaming about. Maybe they are tired of the tight straitjacket that the currency board makes them wear.

7. Bulgaria would make a big mistake if it gave up another piece of its sovereignty to formally join the Eurozone. If Bulgaria joined the Eurozone, it would have to discard one of the few Bulgarian institutions that works well, is supported by the public, and is controlled by Bulgarians. This would be in exchange for an unclear and potentially unstable arrangement that Bulgaria cannot control and cannot opt-out of.