On March 3, 2014, the United States went to war with Russia. That’s when the U.S. first imposed sanctions. And, yes, sanctions are nothing more than war by non‐​military means. Then, on November 11 Russia committed a major misstep. It floated the ruble. Since then, the ruble hasn’t floated on a sea of tranquility. It has plunged in lockstep with oil — by about 25% and its volatility has soared to around 65%.

The ruble’s plunge means that Russian imports will be more expensive and exports more competitive. This combination will help keep Russia’s current account positive, which will offset some of Russia’s massive capital flight.

A currency board, rather than a floating ruble, would protect Russia from the specter of inflation.

In addition, Russia's fiscal accounts are denominated in depreciating rubles and its oil exports are invoiced in appreciating U.S. dollars. So, the fiscal blow from lower oil prices will be cushioned by a weak ruble.

But, there are limits to any temporary benefits from a ruble rout. When a currency takes a dive, the specter of inflation is always right around the corner. How can Russia avoid further damage and correct for its error of November 11?

Russia should abandon the floating exchange-rate regime, which it adopted on November 10. Oil and other commodities that Russia exports are priced and invoiced in U.S. dollars. By embracing a floating exchange-rate regime, Russia is inviting instability. The ruble's nominal exchange rate will fluctuate with oil and other commodity prices. When the price of oil rises (falls) the ruble will appreciate (depreciate), and Russia will experience a roller-coaster ride distinguished by deflationary lows and inflationary highs. To avoid these wild rides, most of the big oil producers — Saudi Arabia, Kuwait, Qatar and the United Arab Emirates — link their currencies to the U.S. dollar. Russia should do the same. 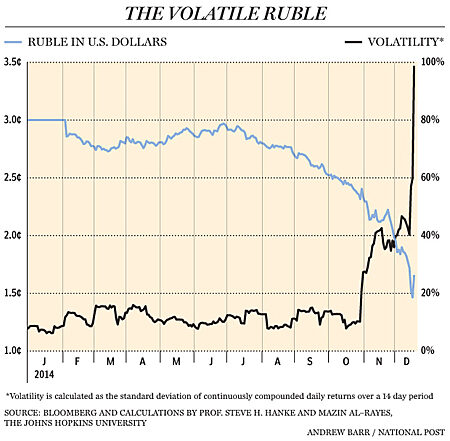 Under a currency board system a central bank issues notes and coins. These are convertible into a foreign reserve currency at a fixed rate and on demand. As reserves, the monetary authority holds high-quality, interest bearing securities denominated in the reserve currency. Its reserves are equal to 100 per cent, or slightly more, of its notes and coins in circulation, as set by law. A central bank operating under a currency board rules does not accept deposits and it generates income from the difference between the interest paid on the securities it holds and the expense of maintaining its note and coin in circulation. It has no discretionary monetary policy. Instead, market forces alone determine the money supply.