Latin America is plagued with many endemic economic problems. As a result, slow growth and economic instability are the order of the day. Latin America is sinking. In the grand scheme of things, it’s become irrelevant.

When it comes to listing culprits that account for the zombie growth rates in Latin America, the laundry list usually includes: high levels of corruption, a weak application of the rule of law, poor public services, a lack of public safety, and so on.

A quick look at the International Monetary Fund’s (IMF) most recent World Economic Outlook tells the tale. Six months ago, the IMF predicted that the region would grow at an anemic 1.4% this year. Now, the IMF has downgraded Latin America’s growth rate for 2019 to a measly 0.2%. Given the recent turmoil in Ecuador, Bolivia, and Chile, I think the IMF’s most recent forecast might be too rosy. And, if that’s not bad enough, the IMF forecasts for the next five years indicate that the prospects for the region are bleak. Indeed, the IMF’s five‐​year forecasts indicate that most of the countries in Latin America will grow below the global average for emerging market economies

The real problem that plagues most Latin American countries is the fact that they have central banks that issue half‐​baked local currencies. Although widespread today, central banks are relatively new institutional arrangements. In 1900, there were only 18 central banks in the world. By 1940, the number had grown to 40. Today, there are over 150.

Before the rise of central banking, the world was dominated by unified currency areas, or blocs, the largest of which was the sterling bloc. As early as 1937, the great Austrian economist Friedrich von Hayek warned that the central banking fad, if it continued, would lead to currency chaos and the spread of banking crises. His forebodings were justified. With the proliferation of central banking and independent local currencies, currency and banking crises have engulfed the international financial system with ever‐​increasing severity and frequency. What to do?

The obvious answer is for vulnerable emerging‐​market countries, like those in Latin America, to do away with their central banks and domestic currencies, replacing them with a sound foreign currency. Panama is a prime example of the benefits from employing this type of monetary system. Since 1904, it has used the U.S. dollar as its official currency. Panama’s dollarized economy is, therefore, officially part of the world’s largest currency bloc.

The results of Panama’s dollarized monetary system and internationally integrated banking system have been excellent (see the table below). 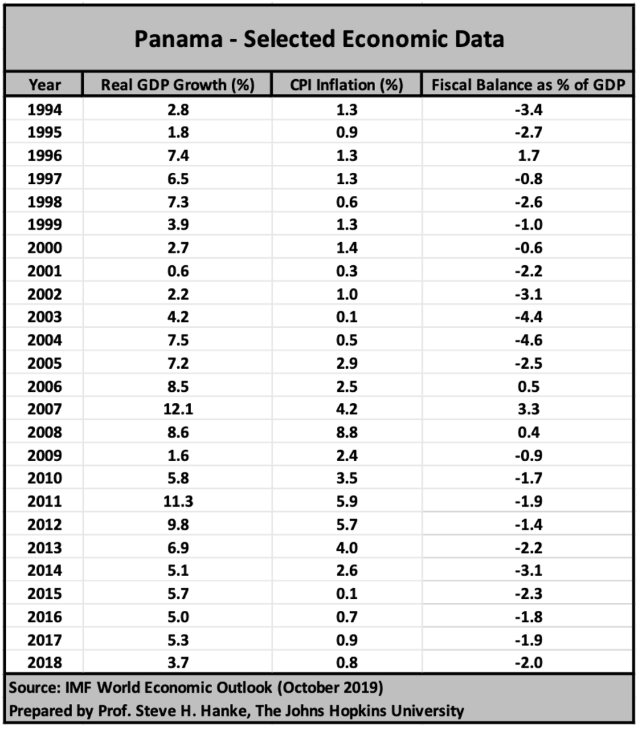 To avoid the pain described in the IMF’s World Economic Outlook, Latin American countries should dump their central banks and local currencies. They should follow Panama’s lead and adopt the greenback.