Representatives from President Trump’s Federal Commission on School Safety just met in Cheyenne, Wyo., for their third public listening session aimed at reducing violence in schools. In these meetings, people have called for arming teachers with guns, hiring more counselors, putting more officers on campuses, and throwing more money at the issue. But none of these types of proposals address the root of the school safety problem.

A just‐​released study by Harvard University’s Dr. Dany Shakeel and I suggests that private school vouchers could be tickets to safer schools.

A just-released study by Harvard University's Dr. Dany Shakeel and I suggests that private school vouchers could be tickets to safer schools.

We employ nationally representative data from the Schools and Staffing Survey for the most recently available (2011-12) school year. Using survey responses from school principals across the nation, we find that safety problems are less likely to occur at private schools than government schools. In fact, we find that private schools have a statistically significant advantage for each of the 13 discipline problems examined – even after controlling for factors such as school size, school type, enrollment, student-teacher ratio, percent of minority teachers, percent of minority students, and urbanicity.

And the safety benefits of private schooling are large. 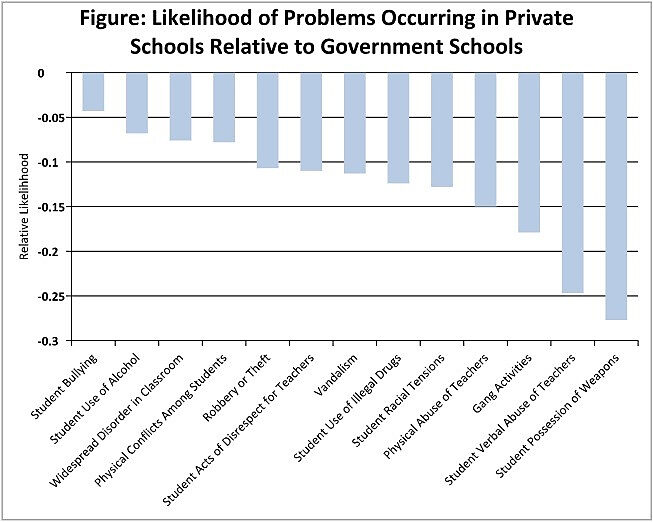 And this new study isn't the only evidence suggesting that private school choice can lead to more safety for students in U.S. schools. As I pointed out at the second public listening session (in Lexington, Ky.) all four rigorous evaluations linking private school choice programs to student safety find large positive effects. For example, the most recent federal evaluation of the D.C. voucher program found that students that won the lottery to attend a private school were 35 percent more likely to report that they were in a very safe school than their peers in government schools.

The results of these studies are significant. But they shouldn't surprise us all that much. Families care about the safety of their children more than anyone else. And private schools must cater to the needs of families if they wish to keep their doors open. On the other hand, government schools remain open whether they are safe or not. Unfortunately, simply throwing more resources at a broken system won't fix anything. Hopefully the Federal Commission on School Safety will figure that out soon.