Since President Tayyip Erdogan has been at the helm, the Turkish lira has tumbled. Today, it collapsed. At one point, it was down as much as 18.5% against the U.S. dollar. The chart below traces the ugly course the lira has taken against the greenback under Erdogan’s tutelage. 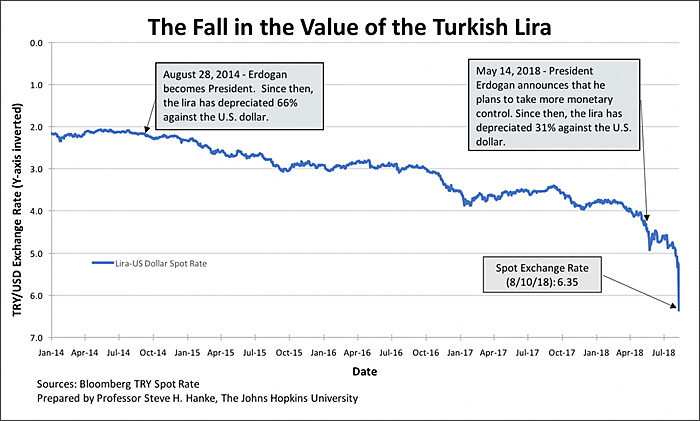 With the collapse of the lira, Turkey's inflation has surged. The most important price in an economy is the exchange rate between the local currency and the world's reserve currency mdash; the U.S. dollar. Changes in the exchange rate can be reliably transformed into accurate estimates of countrywide inflation rates. The economic principle of Purchasing Power Parity (PPP) allows for this transformation. 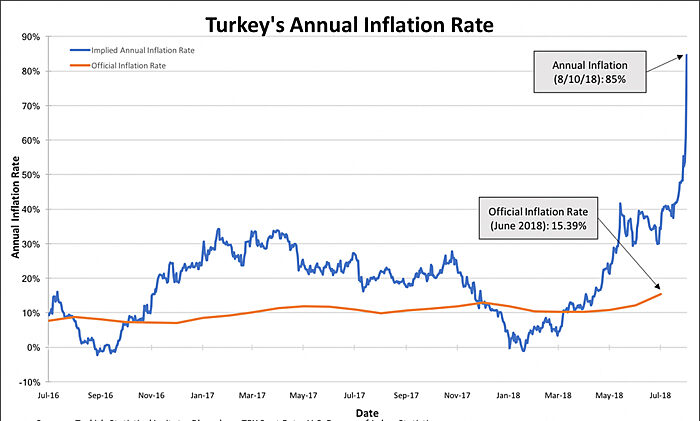 President Erdogan claims that Turkey will come up with a new economic game plan to save the lira. Well, he better come up with one fast. As it turns out, there is a ready-made economic strategy on the shelf, and it’s a strategy that works. I refer to it as the “Singapore Strategy.”

Singapore gained its independence in 1965, when it was, in effect, thrown out of Malaysia. At that time, Singapore was backward and poor — a barren speck on the map in a dangerous part of the world. If that wasn’t enough, it was experiencing race riots, which came close to igniting a civil war. Singapore’s per-capita income in 1965, adjusted for inflation, was roughly equivalent to that of poor countries like Albania, Angola, Armenia, Guyana, Kosovo, and Mongolia, today.

But, at its founding, Singapore had a leader, Lee Kuan Yew. He had clear ideas about how to modernize the country: the “Singapore Strategy.” This strategy contained the following elements:

The first element was stable money. Singapore started with a currency board system — a simple, transparent, rule-driven monetary regime. Currency boards operate on autopilot, with automatic adjustments keeping the system in balance. Accordingly, currency boards deliver discipline to the spheres of money, banking, and fiscal affairs. For Singapore, the currency board provided stable prices and free convertibility of the Singaporean dollar, which was fully backed by foreign reserves and gold, at a fixed exchange rate. This established confidence and attracted foreign investment.

Turkey should follow Singapore’s lead and adopt a currency board in which the lira would be linked to and fully backed by gold. Such a gold-backed currency board would make the lira as good as gold.

The second element was that Lee Kuan Yew ruled out passing the begging bowl. Singapore refused to accept foreign aid of any kind. This is a far cry from many developing countries, where, when you pick up the paper, all you see are politicians and bureaucrats trying to secure foreign aid from someone, be it an NGO, a foreign government, or an international financial institution, like the World Bank. By contrast, signs reading “no foreign aid” were hung figuratively outside every government office in Singapore.

The third element was that Singapore strived to have first-world, competitive private enterprises. This was accomplished via light taxation and light regulation, coupled with completely open and free trade — in short, policies that enabled Singapore to become one of the Asian Tigers.

The fourth element in the Singapore Strategy was an emphasis on personal security, public order, and the protection of private property.

The fifth, and final, element in the Singapore Strategy was a “small,” transparent government — a minimalist government that avoided complexity and “red tape”.

To execute the strategy with precision, Singapore appoints only first-class civil servants and pays them first-class wages. Today, for example, the Singaporean Finance Minister’s annual salary is $1.3 million dollars (USD). In exchange for these high salaries, the Singapore Strategy demands that the government runs a tight ship, with no waste or corruption. By embracing Lee Kuan Yew’s Singapore Strategy of stable money, no foreign aid, first-world competition, law and order, and a government that is free of waste and corruption, Singapore has transformed itself from a poor, barren speck to a global financial center.

If President Erdogan was smart, he would embrace the Singapore Strategy. And he should do it Monday morning, before the markets open.