On June 23rd, the voters in the United Kingdom (UK) turned a collective thumbs‐​down on the European Union (EU). The Brexit advocates — the ones who had had enough of the EU’s mandates and regulations — won the day. But, this is only the first step on a long and winding exit road. To formally begin its withdrawal from the EU, the UK must trigger Article 50 of the Lisbon Treaty, and the new British Prime Minister, Theresa May, won’t do that before the end of 2016. Once triggered, the UK has two years to negotiate its exit from the EU.

The Brexit vote was a surprise that temporarily rocked the markets, sent the pound to a 32 year low, and sent the chattering classes chattering. It also poured fuel on a simmering Italian fire — a fire that could result in an Italian, as well as a Eurozone, doomsday scenario.

In anticipation of poor results from the Italian banks' stress tests (which will be reported on July 29th), Italy's Prime Minister, Matteo Renzi, has indicated that his government will unilaterally pump billions of euros into Italy's troubled banks to recapitalize them. There is a problem with this approach: it is not allowed under new EU rules. These rules require that bank bondholders take losses (a bail-in) before government bailout money can be deployed. But, in Italy, a big chunk of bank debt (bonds) is held by retail investors. These retail investors vote in large numbers. So, the EU bail-in regulation, if invoked, will certainly put Renzi's neck on the chopping block. And that will come sooner rather than later because the Prime Minister has called for a referendum on Italy's constitution in October and stated that he'll resign if the referendum is voted down.

If, following the stress tests, holders of Italian bank debt are required to bail-in banks, there will most certainly be a strong backlash that will not only kill Renzi's referendum but also his government. That would most likely put the Five Star Movement in the saddle. The Movement is already surging, winning control of important local governments in Rome and Turin. This populist-left movement wants to exit the Eurozone. If you think Brexit was big, such a scenario would not only spell doomsday for Renzi but also probably for the euro.

Let's take a closer look at the Italian economy and its banks. That requires a model of economic activity. The monetary approach posits that changes in the money supply, broadly determined, cause changes in nominal national income and the price level (as well as relative prices — like asset prices). Sure enough, the growth of broad money and nominal GDP are closely linked. Indeed, the data in the following chart speak loudly. 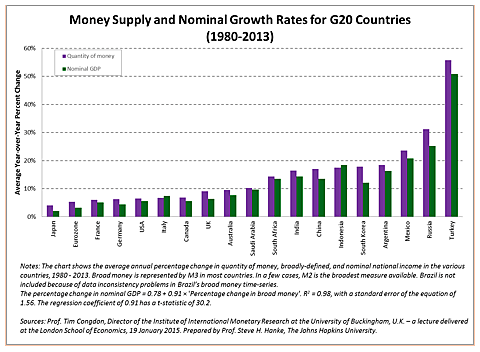 Italy's money supply (M3) growth rate since 2010 has been well below its trend rate (6.53 percent) for most of the period (see the accompanying chart). Not surprisingly, Italy's nominal GDP growth rate during the 2010-2015 period was only 0.4 percent per year. 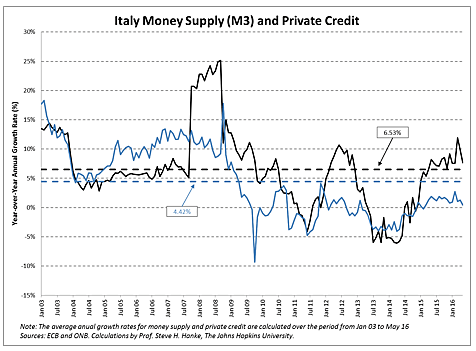 It's no surprise that Renzi has his eye on banks. It's also easy to see why he is worried and ready to pull the trigger on a state-sponsored bank bailout. The accompanying chart on non-performing loans should be cause for concern. 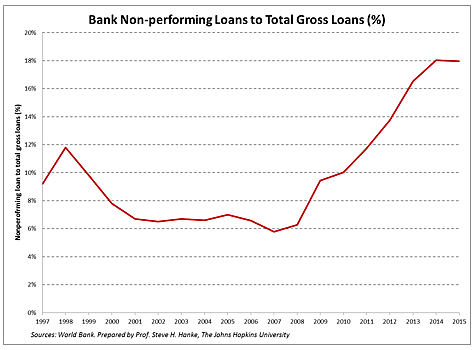 To put the non-performing loans into perspective, there is nothing better than the Texas Ratio (TR). The TR is the book value of all non-performing assets divided by equity capital plus loan loss reserves. Only tangible equity capital is included in the denominator. Intangible capital — like goodwill — is excluded.

So, the denominator is the defense against bad loans wiping the bank out, forcing it into insolvency. A TR over 100 percent means that a bank is skating on thin ice. Indeed, if the non-performing loans were written off, a bank with a TR in excess of 100 percent would be wiped out. All of the five big Italian banks in the accompanying table — including the Banca Monte dei Paschi di Siena (BMPS), the world's oldest bank — fall into this ignominious category. 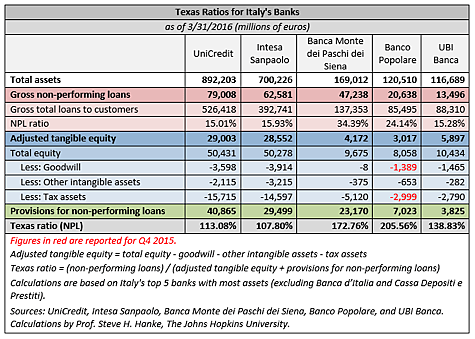 They need to be recapitalized. This could be done by issuing new shares on the market. But, all these banks' shares are trading well below their book values. BMPS' price is only about 10 percent of its book value, and Intesa Sanpaolo (the best of the lot) is only about 66 percent. In consequence, any new shares issued on the market would dilute existing shareholders and be unattractive. This is why an Italian state rescue is the most attractive source for the recapitalization.

Renzi holds the right cards. If the EU continues to refuse to let Renzi play them, the Italian banks will be bailed-in by the bondholders, who will receive a close haircut. Renzi's constitutional changes will probably go down in flames, and with them Renzi's government. With that, the Five Star Movement will form a government and Italy will exit the Eurozone. So, if the EU does not bend and allow one of the loopholes in its rules to be used, the Boys in Brussels could set a doomsday machine into motion.