The Islamic Republic of Iran’s economy suffers internal, debilitating problems. Many anti‐​market seeds were sown by the last Shah. These seeds have been well tended and aggressively added to by Iran’s current theocratic regime. If these homemade economic problems weren’t enough, Iran’s foreign policy adventures have invited the imposition of economic sanctions by its foreign foes.

The combination of an inherently weak and vulnerable economy, and annoying sanctions, make for a perfect storm. This storm produces a good deal of misery.

For a quick take on how miserable a country is, I construct Hanke’s Annual Misery Index. My Index is the sum of the unemployment, inflation, and bank lending rates, minus the percentage change in real GDP per capita. Higher readings on the first three elements are “bad” and make people more miserable. These are offset by a “good” (GDP per capita growth), which is subtracted from the sum of the “bads.” A higher Misery Index score reflects a higher level of “misery.”

A way to take the temperature of a patient, such as Iran, on a real time basis is to observe the black-market (read: free-market) Iranian rial — U.S. dollar (IRR/USD) exchange rate. The chart below shows the course of the official and black-market IRR/USD rates. 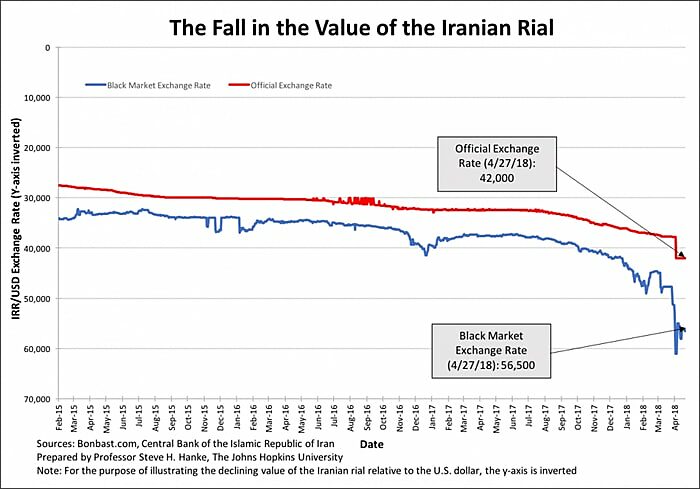 The recent collapse in the value of the rial was spawned by the threat that President Trump would tear up the Joint Comprehensive Plan of Action (JCPOA) nuclear deal and lay on more primary and secondary sanctions against Iran. This sent thousands of Iranians to Tehran's Ferdowsi Street, which is populated by a beehive of exchange houses. It is there that they dumped rials for greenbacks.

By using the IRR/USD exchange rate, which represents the most important price in Iran, I estimate Iran's inflation rate. Indeed, the black-market exchange rate can be reliably transformed into accurate measurements of countrywide inflation rates. The chart below shows how Iran's implied annual inflation rate has surged to an annual rate of 53.8%, with the collapse of the rial's value against the U.S. dollar. 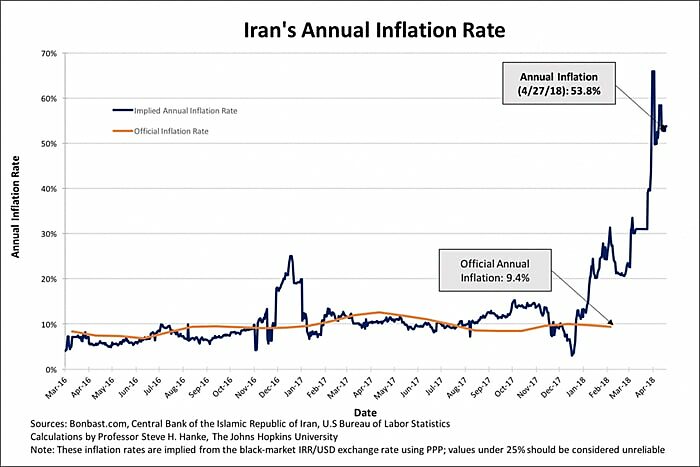 If we use the current annual, surging inflation rate of 53.8% to calculate a new Misery Index score, there are only two countries more miserable than Iran: Venezuela and Syria.

A 34.5% black-market premium indicates that Iranians were willing to pay almost 35% more for U.S. dollars in the black-market than if they were lucky enough (read: privileged enough) to obtain them at the official exchange rate.

For a fuller picture of the black-market premium, I have plotted it while President Hassan Rouhani has been in office. As we can see, the recent spikes have been associated with President Trump's attacks on the JCPOA nuclear deal, which have clearly spooked the Iranian public. 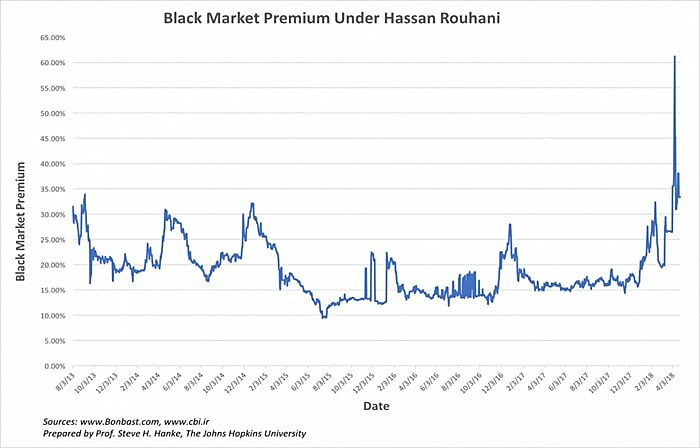 To follow how Iranians perceive both the internal and foreign zigs and zags of the state of affairs they face, there is no better, up to the minute, measure than the IRR/USD black-market premium. In short, instead of obsessing over each and every utterance of the ‘talking heads,’ observers should be following the black-market premium.