The plunging Shanghai Stock Exchange and the sudden reversal in the yuan’s appreciation have caused fears to spread beyond China’s borders. Is something wrong with the world’s growth locomotive? In a word, yes.

The most reliable approach for the determination of nominal gross domestic product (GDP) and the balance of payments is the monetary approach. Indeed, the path of an economy's nominal GDP is determined by the course of its money supply (broadly determined).

The accompanying chart of China's money supply and private credit tells us why China's economy is in trouble. The annual trend rate of money supply (M2) growth is 17.1%. In early 2012, M2 was growing at an annual rate of 20% — well above the trend rate. Then, M2's annual growth rate suddenly plunged to 15% and has been drifting down ever since. 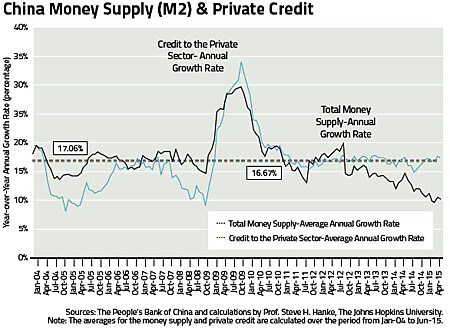 Today, the annual M2 growth rate is a bit above 10%. In consequence, nominal GDP will decline from its current level. This spells trouble for China, and the rest of the world. These prospective troubles are already baked in the cake.

Just why has the M2 annual growth rate declined? One factor behind the decline has been recent hot money capital flight. This shows up when we decompose the reserve money (state money) produced by the People's Bank of China. The foreign exchange contribution to state money is no longer pulling the rate of state money up. It is pulling it down (see the accompanying monetary composition chart). 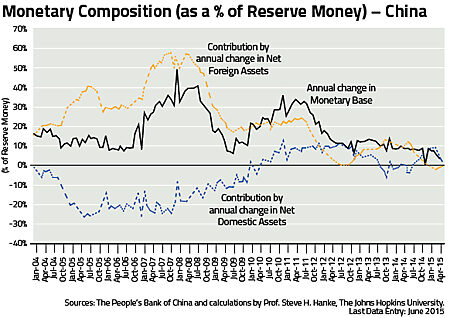 How did China arrive at this point — a point of high uncertainty and potential economic instability? A look at China's exchange-rate regimes provides a window into these troubled waters. Since China embraced Deng Xiaoping's reforms on 22 December 1978, China has experimented with different exchange-rate regimes. Until 1994, the yuan was in an ever-depreciating phase against the U.S. dollar. Relative volatile readings for China's GDP growth and inflation rate were encountered during this phase.

After the maxi yuan depreciation of 1994 and until 2005, exchange-rate fixity was the order of the day, with little movement in the CNY/USD rate. In consequence, the volatility of China's GDP and inflation rate declined, and with the yuan firmly anchored to the U.S. dollar, China's inflation rates began to shadow those in America (see the accompanying exchange-rate table). Then, China entered a gradual yuan appreciation phase (when the CNY/ USD rate declined in the 2005-14 period). In terms of volatility, economic growth and inflation rates, China's performance has deteriorated ever since it dropped exchange-rate fixity. This ever-appreciating yuan vis-á-vis the U.S. dollar phase appears to have ended this August, with a small yuan depreciation.

So, why did China drop exchange-rate fixity in 2005? After all, China's fixed-rate regime had performed very well. Pressure from the U.S. and many nonsensical mercantilist's arguments caused China to abandon fixity in 2005.

The United States has recorded a trade deficit in each year since 1975. This is not surprising because savings in the U.S. have been less than investment. The trade deficit can be reduced by some combination of lower government consumption, lower private consumption or lower private domestic investment. But, you wouldn't know it from listening to the rhetoric coming out of Washington.

This is unfortunate. A reduction of the trade deficit should not even be a primary objective of federal policy. Never mind. Washington seems to thrive on counter-productive trade and currency wars that damage both the U.S. and its trading partners.

From the early 1970s until 1995, Japan was an enemy. The mercantilists in Washington asserted that unfair Japanese trading practices caused the U.S. trade deficit and that the U.S. bilateral trade deficit with Japan could be reduced if the yen appreciated against the dollar — a weak dollar policy. Washington even tried to convince Tokyo that an ever-appreciating yen would be good for Japan. Unfortunately, the Japanese complied and the yen appreciated, moving from 360 to the greenback in 1971 to 80 in 1995.

In April 1995, Secretary of the Treasury Robert Rubin belatedly realized that the yen's great appreciation was causing the Japanese economy to sink into a deflationary quagmire. In consequence, the U.S. stopped arm-twisting the Japanese government about the value of the yen and Secretary Rubin began to evoke his now-famous strong-dollar mantra. But, while this policy switch was welcomed, it was too late. Even today, Japan continues to suffer from the mess created by the yen's appreciation. As Japan's economy stagnated, its contribution to the increasing U.S. trade deficit declined, falling from its 1991 peak of almost 60% to 9% in 2014. While Japan's contribution declined, China's surged from slightly more than 9% in 1990 to 47% in 2014. With these trends, the Chinese yuan replaced the Japanese yen as the mercantilists' whipping boy.

Interestingly, the combined Japanese-Chinese contribution has actually declined from its 1991 peak of over 70% to only about 56% in 2014. This hasn't stopped the mercantilists from claiming that the Chinese yuan is grossly undervalued, and that this creates unfair Chinese competition and a U.S. bilateral trade deficit with China.

It isn't only the mercantilists' pols who don't understand that nominal exchange rates don't have much to do with trade deficits. Some economists — most notably C. Fred Bergsten of the Peterson Institute for International Economics and supply-side guru Arthur B. Laffer — don't seem to understand the economics behind the U.S. trade deficit, which has been with us since 1975. Those economics were fully explained by one of my occasional collaborators, the late Ronald I. McKinnon from Stanford University. Indeed, he elaborated on them in his last book, The Unloved Dollar Standard: From Bretton Woods to the Rise of China (2013). In short, the U.S. trade deficit is the result of a U.S. savings deficiency, not exchange rates. As a result, the trade deficit can be reduced by some combination of lower government consumption, lower private consumption or lower private domestic investment. You wouldn't know this basic truth by listening to the rhetoric coming out of Washington.

What should China do? First, Beijing should stop listening to Washington. Second, it should adopt a free-market, exchange-rate regime — like the currency board system in Hong Kong. Since 1983, the HKD/USD exchange rate has been fixed at 7.8, and the Hong Kong dollar has been fully convertible and fully backed by U.S. dollar reserves. By adopting such a fixed-rate regime, Beijing would dump instability and embrace stability.