My Globe Asia column in May was titled “Greece: Down and Probably Out.” Well, it’s out. Yes, Greece descended from drama to farce rapidly.

If all goes according to plan, the left-wing Greek government will come to an agreement with the so-called troika — the European Commission (EC), the European Central Bank (ECB), and the International Monetary Fund (IMF) — over the details of a third bailout program by August 20th. This rescue package will probably be worth €86 billion (U.S. $94.5 billion). So, since 2010, Greece will have received three bailouts worth a whopping €430 billion (U.S. $472.2 billion). This amounts to a staggering €39,000 (U.S. $42,831) for every man, woman, and child in Greece.

Like past bailouts, the third one will fail to stop Greece’s economic death spiral. The experts from the EC, ECB, and particularly those from the IMF have been wrong about the prospects for the Greek economy since day one. The experts have failed to embrace a coherent theory of national income determination. Indeed, they have often engaged in ad hoc theorizing that has, at times, appeared to be convoluted and politically motivated. The result has been a series of wildly optimistic forecasts about the course of the Greek economy followed by wrongheaded policies.

What has been missing from the experts’ toolkit is the monetarist model of national income determination. The monetary approach posits that changes in the money supply, broadly determined, cause changes in nominal national income and the price level (as well as relative prices — like asset prices). Sure enough, the growth of broad money and nominal GDP are closely linked. The data in the following chart speak loudly to the linkage. 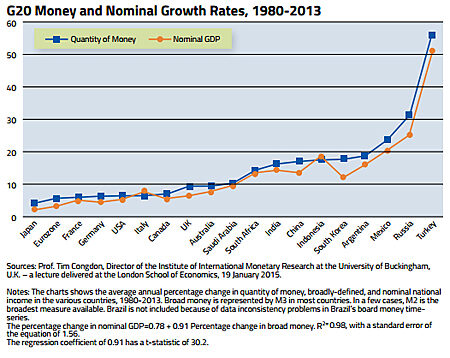 Following the Northern Rock fiasco and bank run in September 2007 and the bankruptcy of Lehman Brothers in September 2008, the ECB allowed the supply of state money to grow. Then, in 2009, Jürgen Stark, the ECB chief economist, convinced the President of the ECB Jean-Claude Trichet that state money (the monetary base) was growing too rapidly and that excessive inflation was just around the corner. In consequence, the ECB withdrew its non-standard measures (read: credit facilities) to Greek banks in the spring of 2010. As the accompanying chart shows, that fateful ECB withdrawal marked a turning point in the growth of broad money in Greece. It, and the Greek economy, have been contracting ever since. This was in spite of a massive fiscal stimulus (a fiscal deficit of 12.7% of GDP) in 2009, prior to the October elections. Money dominates. The important thing to watch is the growth of broad money. 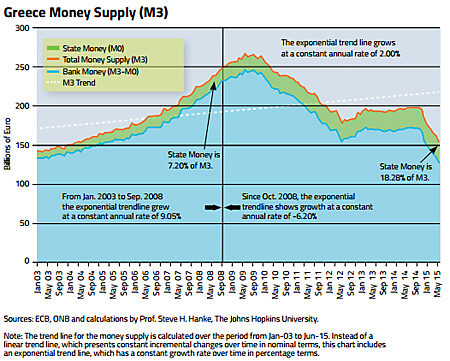 Shortly after the October 2009 victory of the Panhellenic Socialist Movement brought George Papandreou to power, his government passed a so-called austerity budget in which the fiscal deficit was supposed to be squeezed down to 9.4% of GDP.

Greece was clearly in trouble and needed a helping hand. But, the EC and ECB were untrusting of the Greek government. So, in March 2010, the IMF was called in to negotiate loan conditions for new Greek financing. Dominique Strauss-Kahn (DSK) was the IMF's managing director and was preparing to run for the French presidency as the Socialist candidate. DSK was more than willing to give his socialist brothers in Athens a helping hand. In 2010, Greece received a massive bailout.

Just how massive? Normally, the IMF is limited to lending up to six times a country’s IMF quota subscription to that country. However, if the IMF judges a country’s debt to be sustainable, then that country can qualify for “exceptional access,” and the IMF credit extended to such a country can exceed the 600% limit. Thanks to DSK and the IMF experts, the debt sustainability reports were rosy, until recently. The IMF, as well as the other members of the troika, extended credit to Greece, and did so generously.

The following table tells the tale. Greece holds the record for the highest IMF credit level relative to a country’s quota. 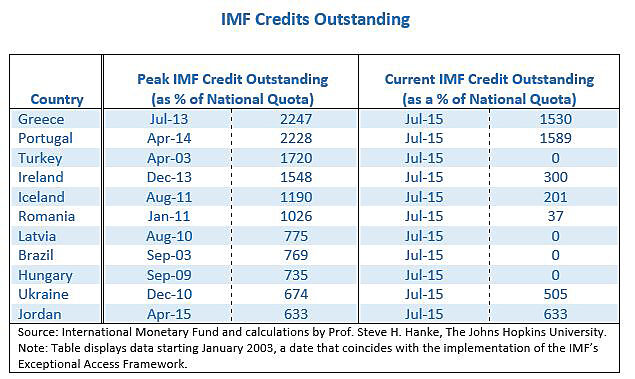 The first and second bailouts of May 2010 and February 2012 did boost the growth rate of state money. But, bank money, which accounts for the lion's share (over 80%) of total money (M3) contracted at a very rapid rate. In consequence, the money supply (M3) has generally plunged since the bailouts, and so has nominal (and real) economic activity. And the worst is yet to come: note that the last dismal data for state and bank money in Greece are for June. Since then, things have deteriorated, with bank closures and the imposition of capital controls. This spells more trouble for Greek banks that produce over 80% of Greece's money and for the economy.

The four big Greek banks were already in trouble (as of Q1 2015). The accompanying table presents the Texas Ratios for the four banks that make up 87% of bank assets in Greece. Ratios over 100% mean that, if nonperforming loans must eventually be written off, a bank will become insolvent. If current data were available, I believe the nonperforming loans would be much higher than in the first quarter of 2015. In addition, with the collapse of the money supply and little chance of a recovery in the production of bank money, a high percentage of nonperforming loans will be written off. In consequence, the Greek banking system will be insolvent. This means that calls for a fourth Greek bailout are right around the corner. 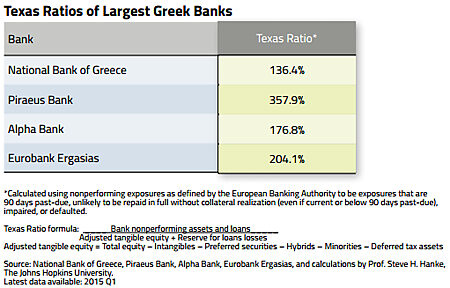 The IMF failures in Greece bring back vivid memories of the Asian Financial Crisis of 1997-98. On August 14, 1997, shortly after the Thai baht collapsed on July 2nd, Indonesia floated the rupiah. This prompted the IMF to proclaim that “the floating of the rupiah, in combination with Indonesia’s strong fundamentals, supported by prudent fiscal and monetary policies, will allow its economy to continue its impressive economic performance of the last several years.”

By late January 1998, President Suharto realized that the IMF medicine was not working and sought a second opinion. In February, I was invited to offer that opinion and began to operate as Suharto’s Special Counselor. I proposed as an antidote an orthodox currency board in which the rupiah would be fully convertible into the U.S. dollar at a fixed exchange rate. On the day that news hit the street, the rupiah soared by 28% against the U.S. dollar. These developments infuriated the U.S. government and the IMF.

Ruthless attacks on the currency board idea and the Special Counselor ensued. Suharto was told in no uncertain terms — by both the President of the United States, Bill Clinton, and the Managing Director of the IMF, Michel Camdessus — that he would have to drop the currency board idea or forego $43 billion in foreign assistance.

Why all the fuss over a currency board for Indonesia? Politics. The U.S. and its allies wanted a regime change in Jakarta, not currency stability. Former U.S. Secretary of State Lawrence Eagleburger weighed in with a correct diagnosis: “We were fairly clever in that we supported the IMF as it overthrew (Suharto). Whether that was a wise way to proceed is another question. I’m not saying Mr. Suharto should have stayed, but I kind of wish he had left on terms other than because the IMF pushed him out.” Even Michel Camdessus could not find fault with these assessments. On the occasion of his retirement, he proudly proclaimed: “We created the conditions that obliged President Suharto to leave his job.”

As the Indonesian episode should teach us, the IMF's management can be very political and often neither trustworthy nor competent. Greece offers yet another chapter.