The literature on hyperinflation is replete with ad‐​hoc definitions, ill‐​defined terminology, and a lack of concern for clear, uniform metrics. Sloppy reasoning and hype prevail. To fill the void, I set out in 2010, at the invitation of the editors of the authoritative Routledge Handbook of Major Events in Economic History, to construct a new, comprehensive table of the world’s hyperinflation episodes. This was an arduous task, fortunately made less arduous because I was assisted by a team of Johns Hopkins research assistants led by Nicholas Krus.

The results of our research — the Hanke-Krus World Hyperinflation Table – were first published by Routledge in 2013. The table contained all 56 countries that had ever experienced a hyperinflation. In late 2016, we amended the Table. It was then that Venezuela became the 57th official, verified episode of hyperinflation and was added to the Table (see the table below). 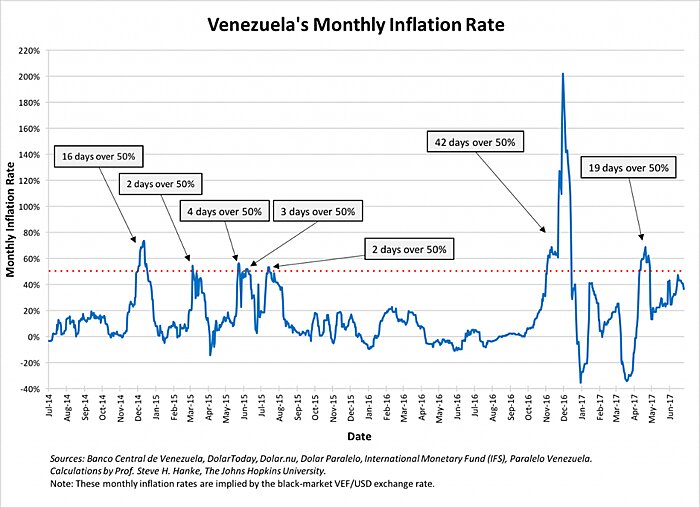 But, just how do we measure inflation in countries that are experiencing elevated inflation rates? In selected countries, including Venezuela, my team at the Johns Hopkins-Cato Institute Troubled Currencies Project (TCP) measures monthly and annual inflation rates each day. Unlike many of the numbers tossed around in countries with elevated levels of inflation, our measurements meet academic standards. The TCP measurements are based on changes in black market (read: free market) exchange rates. The principle of purchasing power parity (PPP) is used to translate exchange rate changes into estimates of implied inflation rates. When inflation is elevated, this method provides deadly accurate estimates.

Today, Venezuela remains in play. Its socialist economy is imploding and its currency, the bolivar, is collapsing. This gave rise to the world’s 57th episode of hyperinflation in late 2016. And in 2017, there was a period in which the monthly inflation rate exceeded 50% for 19 consecutive days. At present, the monthly rate sits at 31%.

Most of what is reported in the press are not measurements of actual inflation rates. Rather, they are forecasts for Venezuela’s inflation that have been made by various international institutions ­– most notably the International Monetary Fund. These forecasts are nothing more than guestimates — finger-in-the-wind forecasts. They are carved in stone and repeated ad nauseam in the financial press. Unfortunately, as with most things in finance, the 95% Rule reigns — 95% of what you read in the financial press is either wrong or irrelevant.