Professor Liping He from Beijing Normal University has produced a most comprehensive and useful scholarly treatment of world hyperinflation. It is hot off the press. This is a welcomed addition to the literature. Indeed, Hyperinflation: A World History is destined to become a standard reference on the topic.

My basis for this judgement rests on my own travails in grappling with the literature and data on hyperinflation.  It also rests on my experience with measuring and stopping hyperinflation. The "Hanke-Krus World Hyperinflation Table" first appeared in the authoritative The Routledge Handbook of Major Events in Economic History (2013). What was the genesis of this Table?

While reflecting on the hyperinflation literature, I was struck by its lack of uniformity and clarity. The literature was widely scattered in time and space; it had been written by many different researchers, and those researchers had used diverse methods to estimate and analyze the inflation episodes studied.

So, I concluded that the best way to "clean up" the subject of hyperinflation was to create a "World Hyperinflation Table." In my mind, this table would include all of the world's hyperinflations. The data would be presented in a uniform and clear manner, so that all episodes of hyperinflation could be compared. But, what criteria would be used for an episode of inflation to qualify as a hyperinflation? I specified the following three criteria:

It turned out that the third criterion was the most difficult one. Fortunately, my chief research assistant at the time, Nicholas Krus, was capable of, and interested in, taking on this research task. Krus and I spent the better part of two years constructing what has come to be known as the Hanke-Krus World Hyperinflation Table. We documented and recalculated the inflation rates for all alleged episodes of hyperinflation in history. The project required the gathering of primary data for each potential case of hyperinflation. This proved to be very difficult and time consuming. For example, primary data for the French episode of hyperinflation of 1795 to 1796 – the first verified hyperinflation – had to be obtained and analyzed. But, that was not the most difficult set of data to obtain. That "prize" was awarded to the Republika Srpska, which experienced a hyperinflation episode in the 1992-1994 period. Fortunately, I was able to use my extensive contacts in the former Yugoslavia to eventually obtain high-quality inflation data.

After a long and onerous research effort, the Hanke-Krus World Hyperinflation Table was published. It is contained in "World Hyperinflations," a chapter in The Routledge Handbook of Major Economic Events in History (2013), which I co-authored with Nicholas Krus.

I recount these reflections because I thought there would not be too much to say about hyperinflation after the publication of the Hanke-Krus World Hyperinflation Table. However, Prof. Liping He has proven me wrong. 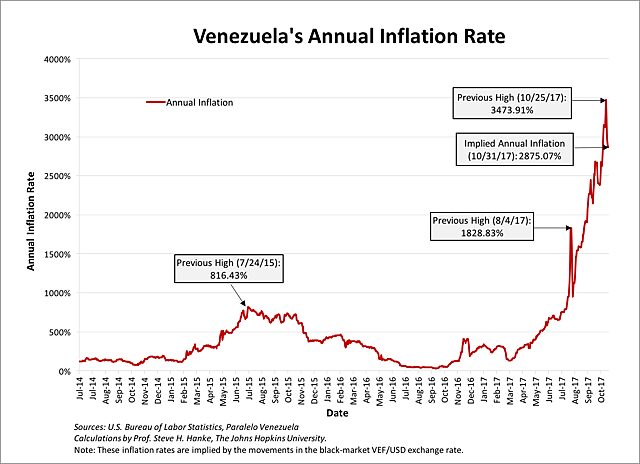 It turns out that Zimbabwe, recently, has also proven me wrong. On October 17, 2017, Zimbabwe entered its second episode of hyperinflation in less than 10 years. The chart below shows what the annual inflation rate for Zimbabwe is today: 343%. 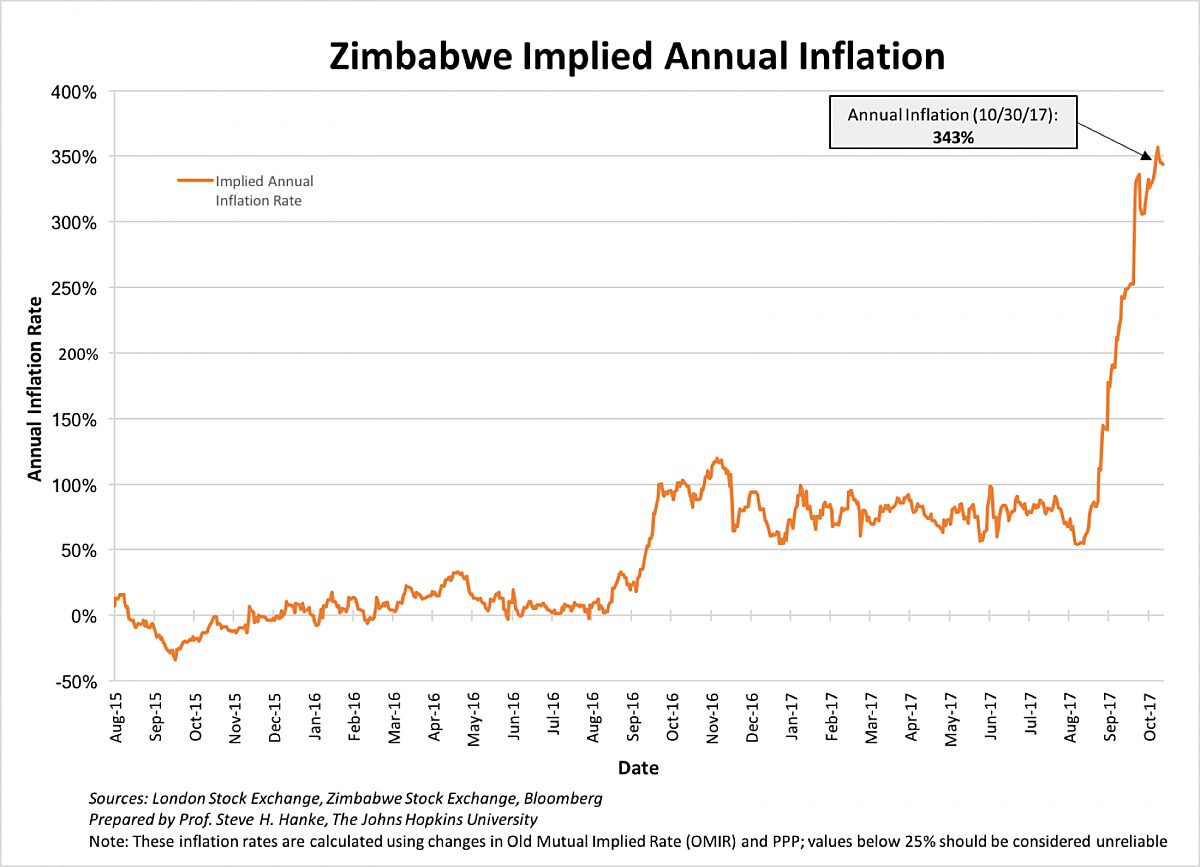 Unfortunately, many journalists and writers play fast and loose with the term "hyperinflation" – a term that has a very specific meaning. Not only is the meaning of the "word" specific, but also its measurement, if properly conducted, can be just as precise.