Skip to main content
Live Now
This article appeared on the China‐​US Focus on June 21, 2016.
TOP

The United States has taken a number of actions in recent years to sustain its strategic primacy in East Asia and the western Pacific. Many of those actions look suspiciously like a containment policy directed against China’s growing economic and military capabilities—and, hence, its growing regional influence. The return of U.S. military forces to the Philippines after a two‐​decade absence, combined with the Obama administration’s rather unsubtle tilt in favor of Manila’s stance regarding its territorial dispute with China in the South China Sea, is perhaps the most visible manifestation. 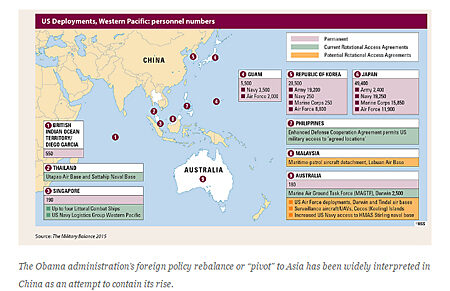 But Washington’s efforts to strengthen its bilateral security alliances with Japan and South Korea and broaden their scope beyond their traditional focus on self-defense to deal with broader “regional contingencies” also fall into that category. So, too, do the efforts of the Bush and Obama administrations to foster greater strategic cooperation with India, a campaign that has produced a growing volume of U.S. arms sales to that country. Finally, the latest diplomatic signal of a containment policy came last month with President Obama’s visit to Vietnam and the lifting of the long-standing arms embargo against that country. 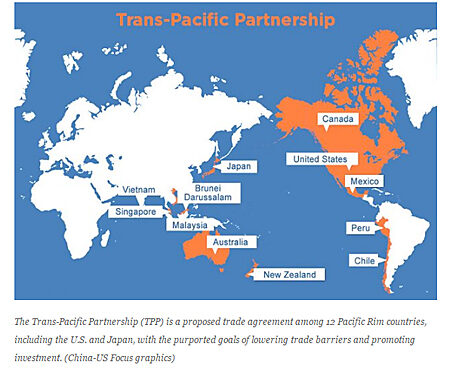 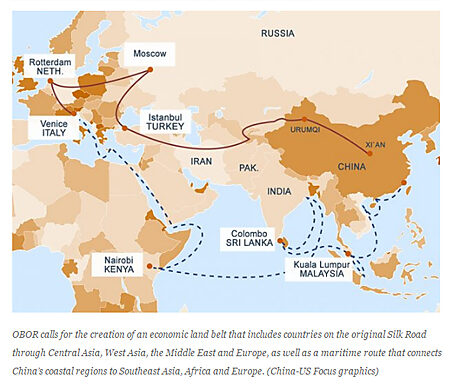 In addition to its diplomatic maneuvers, the United States has been active on the military front. The introduction of U.S. naval vessels into the South China Sea, ostensibly to assert the right of freedom of navigation, was calculated to send a message to Chinese leaders. Plans for deploying a theater missile defense system also seem at least secondarily aimed at China, although the behavior of North Korea's unpredictable regime was the primary reason.

But Beijing has not just passively observed these U.S. actions. Instead, it has pursued a variety of countermeasures. One move was the attempt to establish an Air Defense Identification Zone in the East China Sea. Predictably, the United States and its principal allies defied that ADIZ by conducting military flights without notifying Chinese authorities, but establishing the diplomatic position was important, and it carried with it the possibility that other, more neutral, countries would ultimately honor the requirements. Notably, Beijing appears to be considering taking the same step in the even more volatile South China Sea.

China has not ceded the field to the United States regarding attempts to influence key strategic players.

China has not ceded the field to the United States regarding attempts to influence key strategic players. Beijing has tried to reduce tensions with India, settling one of the border disputes with that country and initiating a hotline between the two military commands to reduce the danger of incidents. And trade between the two Asian giants continues to grow. China has now emerged as India’s largest trading partner, with bilateral trade surpassing $80 billion in 2015.

Beijing is even courting some formal U.S. security allies. Not only does bilateral trade and investment with South Korea continue to grow, but Beijing has skillfully exploited South Korean historical grievances directed at Washington’s principal East Asian ally, Japan. That point became evident this past summer when South Korean President Park Geun‐​hye disregarded Washington’s wishes and attended the ceremony in Beijing marking the 70th anniversary of Japan’s defeat in World War II. Park not only attended the celebration, she was an especially honored guest, occupying the chair on the dais directly to one side of Chinese President Xi Jinping. The other chair of honor was occupied by Russian President Vladimir Putin.

Not surprisingly, Beijing has attempted to strengthen ties with Moscow as part of a strategy to counter Washington’s primacy strategy in Asia. That approach has met with only limited success, but there are mounting signs of policy coordination between Moscow and Beijing as Washington becomes ever more intrusive militarily into regions close to the Chinese and Russian homelands.

Beijing has taken two measures that demonstrate a growing intention to play offense, not just defense. China now plans for the first time to deploy ballistic missile submarines in the Pacific. That is a major change in Beijing’s deployment of forces. Until now, Chinese leaders have been content with a land‐​based, purely second‐​strike nuclear deterrent. Putting part of its strategic arsenal aboard submarines both increases deterrent survivability and creates the specter (however remote) of a first‐​strike capability.

The other component of an offensive rather than purely defensive Chinese strategy is its growing diplomatic and economic (and possibly strategic) penetration of Latin America. Premier Li Keqiang’s high‐​profile visit to several major South American countries in the spring of 2015 was a potent symbol of that intention. But more important has been the deployment of Chinese economic assets. China has now displaced the United States as Brazil’s largest trading partner, and Beijing has been making multi‐​billion dollar loans to various Latin American governments.

Washington is clearly worried about the influence that might accompany such economic maneuvers. In March 2015, President Obama made an announcement that surprised most observers, declaring Venezuela’s leftist regime to be a national security threat to the United States. What puzzled experts is that this move came on the heels of Obama’s policy of rapprochement with Cuba and the previous willingness of his administration (and its predecessors) to regard the behavior of Caracas as an annoyance rather than a threat. What had changed?

One major development took place in January when the Chinese government agreed to a multi‐​billion‐​dollar investment in Venezuela to help offset the impact of the global oil price slump on that country. In addition, there were reports in March of an impending $5 billion loan to Caracas from China, which would have brought the cumulative total to $45 billion. Perhaps Obama’s announcement was just coincidental timing, but it seems more likely that it was a recognition of, and a firm response to, a perceived Chinese geopolitical foray into Washington’s traditional sphere of influence in the Western Hemisphere.

All of this suggests that China does not intend to be a passive victim of U.S. primacy. Beijing may operate at a disadvantage with respect to a geopolitical power struggle against the United States, but it does have some assets to deploy. And it fully intends to do so. Washington may find that its effort to maintain a position of primacy in East Asia is more challenging than it ever anticipated.