The currency speculators are restless, again. Many, like George Soros and Kyle Bass, are reportedly taking aim at the Hong Kong dollar (HKD). HKD bear circles think China’s renmimbi (RMB) will lose value against the U.S. dollar (USD) as China’s economy slows down and capital flight from China continues. This, it is asserted, will put pressure on the HKD, and force its devaluation. Thus rendering the fixed rate of 7.8 HKD/USD null and void, and pumping profits into the pockets of those who bet on a devaluation of the HKD.

Like past speculative attacks against the HKD, this will fail and the bears will be forced back into hibernation, suffering large losses. What is fascinating is how so many experienced currency speculators, like George Soros, can be so ill-informed about Hong Kong's monetary setup. This is far from the first speculative attack on the HKD; the most massive occurred during the Asian Financial Crisis of 1997-98. We cannot forget hedge fund guru Bill Ackman's well-advertised "bet the house" attack against the HKD in 2011. It failed badly.

The currency speculators aren't the only ones ill-informed about Hong-Kong. Financial journalists — even veterans with Hong Kong market experience — clearly don't understand the currency board system that governs the course of the HKD. For example, Jake van der Kamp, a columnist at the South China Morning Post and former analyst at Morgan Stanley, recently fanned the speculative flames by penning a provocative column titled "From a Currency Board to a Banana Republic Manipulation." This brought out a response from John Greenwood, the architect of Hong Kong's currency board system, installed in 1983, and a member of the Currency Board Committee of the Hong Kong Monetary Authority. Greenwood politely took van der Kamp to the woodshed and told him that he didn't know what he was talking about, and van der Kamp had the good sense to admit that he had sinned.

So, why is there so much confusion about exchange rates — particularly fixed exchange rates delivered by currency board systems, like Hong Kong's? To answer that question, we must develop a taxonomy of exchange-rate regimes and their characteristics. As shown in the accompanying table, there are three types of regimes: floating, fixed, and pegged.

In fixed and floating rate regimes the monetary authority aims for only one target at a time. Although floating and fixed rates appear dissimilar, they are members of the same free-market family. Both operate without exchange controls and are free-market mechanisms for balance-of-payments adjustments. With a floating rate, a central bank sets a monetary policy, but the exchange rate is on autopilot. In consequence, the monetary base is determined domestically by a central bank. With a fixed rate, there are two possibilities: either a currency board sets the exchange rate and the money supply is on autopilot, or a country is "dollarized" and uses the U.S. dollar, or another foreign currency, as its own and the money supply is again on autopilot.

Under a fixed-rate regime, a country's monetary base is determined by the balance of payments, which move in a one-to-one correspondence with changes in its foreign reserves. With either a floating or a fixed rate, there cannot be conflicts between monetary and exchange rate policies, and balance-of-payments crises cannot rear their ugly heads. Floating and fixed-rate regimes are inherently equilibrium systems in which market forces act to automatically rebalance financial flows and avert balance-of- payments crises.

Most people use "fixed" and "pegged" as interchangeable or nearly interchangeable terms for exchange rates. In reality, they are very different exchange-rate arrangements. Pegged-rate systems are those in which the monetary authority aims for more than one target at a time. They come in many varieties: crawling pegs, adjustable pegs, bands, managed floats, and more. Pegged systems often employ exchange controls and are not free-market mechanisms for international balance-of-payments adjustments. They are inherently disequilibrium systems, lacking an automatic adjustment mechanism. They require a central bank to manage both the exchange rate and monetary policy. With a pegged rate, the monetary base contains both domestic and foreign components.

As the accompanying monetary composition chart makes clear, China's RMB falls into the pegged regime category. The RMB's monetary base has foreign and domestic components that move around. In addition, China imposes capital controls. So, the RMB bears might be smelling blood. 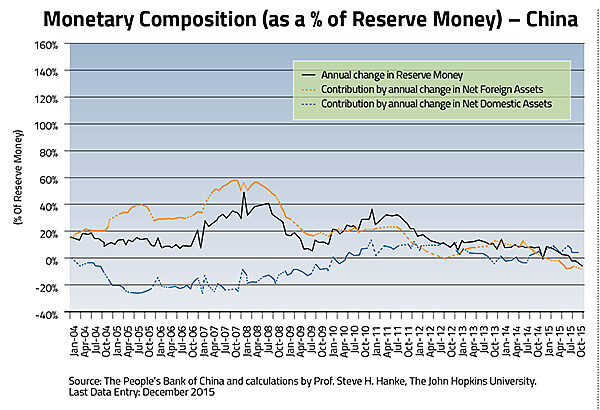 That's not the case with the HKD, which is linked to the USD via a currency board. As such, the board's monetary base (reserve money) must be backed by foreign reserves — 100%, or slightly more. The accompanying chart shows that this so-called currency board "backing (or 'stock') rule" is strictly followed in Hong Kong. The "flow rule" — that reserve money must change in a one-to-one relationship with changes in the currency board's foreign exchange reserves — is also strictly followed in Hong Kong (see the accompanying chart). 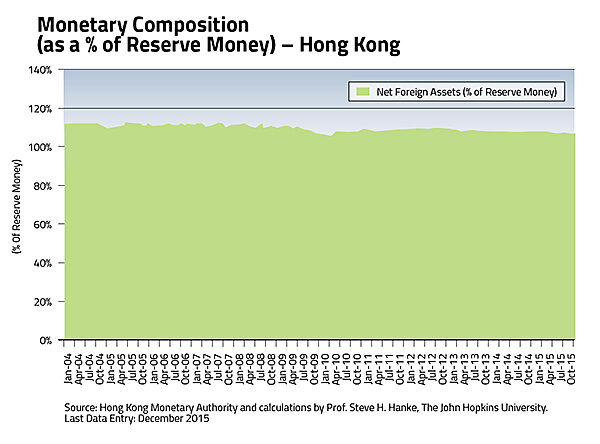 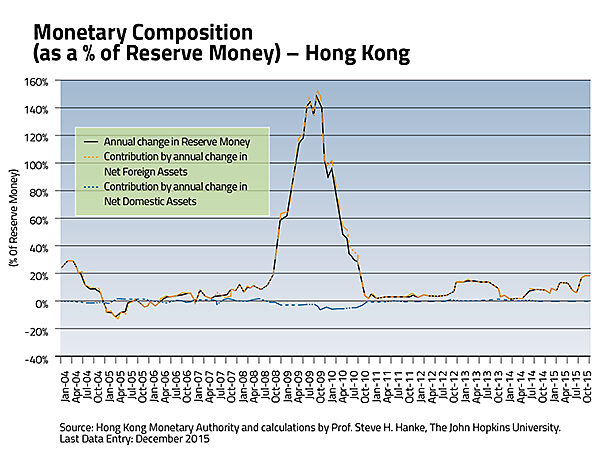 There has never been a system that followed currency board rules — like Hong Kong's — that has been broken by a speculative attack. And Hong Kong's will not be the first. Indeed, its currency board is operating exactly as it should, which is why it can't be broken.

So, what will happen? When the U.S. Fed embraced quantitative easing, USDs flowed into Hong Kong. Now that the Fed has started to notch up the Fed funds rate, the flows have reversed. In consequence, the currency board is automatically tightening up, and both broad money and credit to the private sector are decelerating and are below their trend rates (see the accompanying chart). 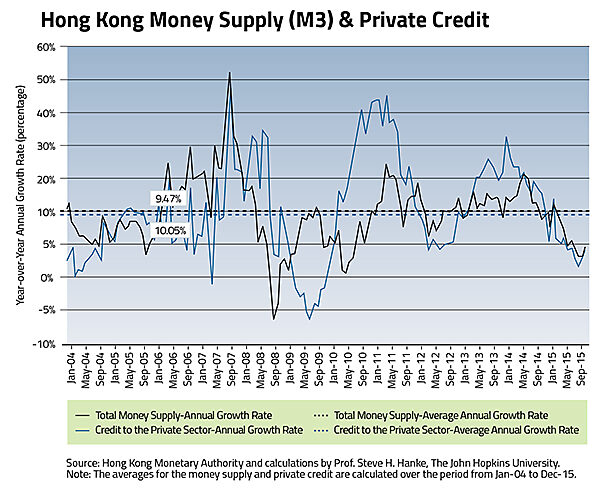 This is just what is supposed to happen. We should expect a slow-down in the Hong Kong economy. But, the HKD will remain rock solid.