Last week, Greenpeace’s chief in India, Samit Aich, wrote a column in ET on genetically‐​modified crops. In this, he repeated an old green falsehood, that Bt cotton has failed to raise cotton yields in India. For the truth, consult the government’s Economic Survey 2011-12 (see accompanying graphic).

In a decade, the yield more than doubled. The truth is clear. Bt cotton has raised yields hugely. Greenpeaceand other activists lack the honesty to admit they were wrong. Instead, they desperately search for studies showing poor Bt cotton results in some conditions or areas. These may show, for instance, that Bt cotton fared much less well in Vidarbha than Gujarat. So what? How does that change the truth that Bt cotton has been a boon overall? When Bt cotton was introduced in India, activists claimed it had low yields and would be uneconomic. 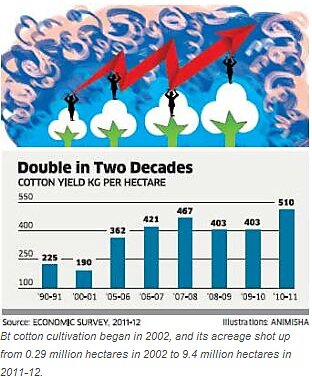 Once the crop started spreading in India, activists produced fresh field studies purporting to show that Bt cotton had actually reduced yield and ruined farmers. At that time, I asked farmer leader Sharad Joshi of the Shetkari Sanghatana for his views. He said, “Let the activists stick to ecological issues. Why are they talking about yields? The farmer knows better than any scientist or activist what his farm yields. Let him decide.” But, I said, the activists say illiterate farmers might be misled by seed companies. So why not look at yield studies by scientists? Joshi replied, “The illiterate farmer is no fool. If he finds that a new variety yields more, he will expand his acreage regardless of what any activist or scientist says.

The claim that anybody who disagrees with green activists is a crony of seed companies is outrageous green McCarthyism. It is intellectually bankrupt and morally malodorous.

If his yield falls, he will abandon that variety regardless of what any seed company BSE 0.42 % says. Forget scientists or ecologists or seed companies. The farmer knows best.” I learned about the wisdom of farmers as a young journalist in 1966. I was part of a press group taken to see the progress of TN-1 rice, a high‐​yielding variety the government was promoting as its spearhead for a green revolution in rice. Despite aggressive promotion by state governments, farmers refused to adopt TN-1.

They also rejected another variety, Tainan‐​3. Only when IR-8 arrived two years later did farmers test it and declare that high‐​yielding varieties worked. Only then did the green revolution in rice take off. Farmers refused to accept varieties just because scientists or researchers claimed these were good. Farmers proved they were hardheaded realists, who could not be taken for a ride. So, Greenpeace and other activists need to end prevarications about gullible Indian farmers being duped to grow uneconomic Bt cotton. Farmers have switched massively from other crops to Bt cotton.

They pay hefty rentals (over Rs 50,000 per hectare in Punjab) to lease land to grow Bt cotton. Would they be so stupid as to pay such high rentals if it was uneconomic? Activists now warn that pests are developing resistance to old varieties of Bt cotton, and so, new, costlier varieties will have to developed. So what? Antibiotics have saved millions of lives the world over, and have hugely improved and lengthened human life. But bacteria have developed drug resistance, and to overcome this new, costly antibiotics have to be developed. Does this mean antibiotics have not been a boon? Alexander Fleming won the Nobel Prize for discovering penicillin.

Today, many bacteria are resistant to penicillin. Will Greenpeace demand that Fleming’s Nobel Prize should be revoked? The boon of antibiotics would be even bigger without drug resistance, but it remains a boon even with resistance. Exactly the same holds for Bt cotton. Aich and other activists keep implying or saying outright that anyone having a good word for GM crops is a crony of multinational seed companies. Really? Is the agriculture ministry a division of Monsanto BSE 1.45 %? Is the finance ministry, which brings out the Economic Survey, a paid hack of Monsanto? Am I a paid hack? The claim that anybody who disagrees with green activists is a crony of seed companies is outrageous green McCarthyism. It is intellectually bankrupt and morally malodorous.

Aich touches on many GM issues other than Bt cotton. In effect, he seems to be saying, let us disagree on Bt cotton and move on to other GM issues. Sorry, but I will not move on since his position on Bt cotton is not a mere disagreement. It is a falsehood.