The human condition inhabits a vast continuum between “miserable” and “happy.” In the sphere of economics, misery tends to flow from high inflation, steep borrowing costs and unemployment. The most surefire way to mitigate that misery: economic growth. All else equal, happiness tends to blossom when growth is strong, inflation and interest rates are low, and jobs are plentiful.

Would you consider the United States to be more or less miserable than other countries? To answer this question, I update my annual Misery Index measurements.

My modified Misery Index is the sum of the unemployment, inflation and bank lending rates, minus the percentage change in real GDP per capita. Higher readings on the first three elements are “bad” and make people more miserable. These are offset by a “good” (GDP per capita growth), which is subtracted from the sum of the “bads.” A higher Misery Index score reflects a higher level of “misery,” and it’s a simple enough metric that a busy president, without time for extensive economic briefings, can understand it at a glance.

In the accompanying table, you can find Misery Index rankings for the 98 nations that report relevant data on a timely basis. For consistency and comparability, all data come from the Economist Intelligence Unit. 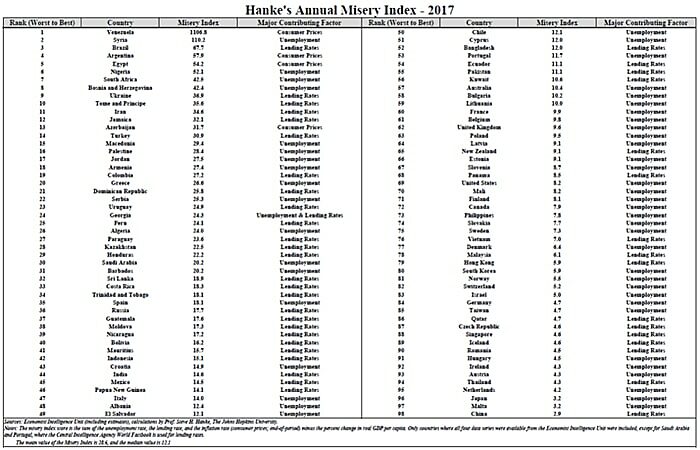 Let’s start with the most miserable country and work toward the happiest. Flip it around, and you have a Happiness Index.

Venezuela holds the inglorious tile of the most miserable country in 2017, as it did in both 2016 and 2015. The failures of President Nicolas Maduro's socialist, corrupt petroleum state have been well documented over the past year, including by my measurements of Venezuela’s hyperinflation. Not only is Venezuela the most miserable country in the world, but its Misery Index score has dramatically increased since 2016.

Syria holds down the rank of second-most miserable, and the reason isn’t hard to uncover. Indeed, Syria has now been in the grip of a brutal civil war for almost seven years. Need I say more?

Brazil remains in the No. 3 spot for the second year in a row. As my close friend Roberto Campos — the late Brazilian economist, diplomat and politician — once explained to me during a visit to Brasília: The Brazilian Constitution is as thick as the New York City telephone book and is full of little more than rights and entitlements. President Michel Temer has attempted to turn back the tide of government obligations. But to date, his attempts to rein in the country’s biggest unfunded liability — the pension system — have come to naught. The bankrupt pension system is, of course, not the only problem facing Brazil. Corruption, for example, remains an endemic problem.

Argentina has improved its ranking (and index score) in 2017, moving from the second- to the fourth-most miserable country in the world. But until inflation is wrestled to the ground, President Mauricio Macri will struggle — as President Carlos Menem did until April 1, 1991, when he introduced Argentina’s Convertibility System, which linked the peso to the greenback.

Egypt ranked fifth-most miserable, a notch lower than in 2016. But, Egypt’s Misery Index score actually increased — a bad sign. President Abdel Fattah el-Sisi’s military-socialist rule continues to deliver misery. In addition to the problems that accompany any socialist-type system in which the military plays a decisive role, the Egyptian pound remains the country’s Achilles’ heel. The only solution to this problem is the adoption of a currency board, in which the pound would become a clone of an anchor currency, such as the euro or U.S. dollar.

Let’s move to the other end of the table — the end where the least miserable countries reside. It is there that we find China ruling the roost as the world’s “happiest” country. President Xi Jinping has some bragging rights here, and in the world’s soft-power sphere, these are valuable.

Now for the United States: Its Misery Index score has improved a bit, moving from 9.4 in 2016 to 8.2 in 2017. Yet as far as happiness is concerned, it is not America first but America 30th — trailing behind 29 other countries on the happiness train.