Skip to main content
Live Now
This article appeared in the May 2015 issue of Globe Asia.
TOP

Led by the charismatic Alexis Tsipras, the Syriza party took office in Athens on January 26th. The most prominent member of the new Prime Minister’s cabinet is Yanis Varoufakis, the Finance Minister. He is an economics professor, with a complete repertoire of anti‐​capitalist rhetoric. And with government spending amounting to 58.5% of Greek GDP, Varoufakis’ hot anti‐​austerity harangues have turned the meaning of the word “austerity” on its head. After three months in office, the Syriza coalition has accomplished virtually nothing. There have been no commitments — credible or not — to do anything.

As Greece’s economic drama (read: crisis) moves towards its final stage, people are anxious to see how it will end. “I looked up the answers in the history books,” writes John Dizard in the Financial Times, “it works better than trying to get inside information from the cabinet, since there is no information on the inside.”

It turns out that this is not the first time Greece has been in financial hot water. Indeed, that Balkan country has been a serial deadbeat. Following its recognition as a state in 1832, Greece spent most of the remainder of the 19th century under the control of creditors. The pattern started with a default in 1832. In consequence, Greece’s finances were put under French administration. Following Greece’s defeat at the hands of Turkey in 1897, Greece’s fiscal house was entrusted to a Control Commission. During the 20th century, the drachma was one of the world’s worst currencies. It recorded the world’s sixth highest hyperinflation. In October 1944, Greece’s monthly inflation rate hit 13,800%.

Fast forward and we observe Greece’s entry into the European Monetary Union (EMU) on January 1st, 2001, two years after the eleven original members established the EMU. Greece’s entry was under a cloud because most either knew or suspected that it came with some accounting trickery. Still, the Greeks were enthusiastic new members of the “club.” If Greece could enter without following the rules and free ride — the other members of the “club” would have to pay the bill. That was the thinking in Athens. But, Greece got into trouble when others stopped picking up the tab. This is a classic recipe for a fiscal time bomb, and time is running out.

The International Monetary Fund (IMF), as well as the European Union (EU) and other creditors have supplied plenty of fissionable material for the bomb. As for the IMF, it has never before extended credit to any country on such a scale. Under normal conditions, the IMF is supposed to be limited to lending up to 200% of a country’s quota in a single year and 600% in cumulative total. Under the IMF’s “exceptional access” policy, however, there are virtually no limits on lending. Greece has talked its way into IMF credits worth an astounding 1,860% of its quota. In consequence, Greece owes the IMF about $30 billion, with big chunks of the debt due relatively soon.

The creditors have a Greek problem. In the words of former President George W. Bush: “this sucker is going down.”

To understand why, one needs a theory of national income determination. Unfortunately, most of what is written about Greece fails to offer much by way of such a theory. Indeed, the financial musings about the Greek crisis adhere to my “95% Rule”: 95% of what appears in the financial press is either wrong or irrelevant.

The monetary approach fills this void. It posits that changes in the money supply, broadly determined, cause changes in nominal national income and the price level. Sure enough, the growth of broad money and nominal GDP are closely linked.

Greece is in a depression. During the 2008-13 period, GDP has dropped by almost 30%. Last year, GDP managed to stabilize, with growth of less than 1%. But, this year looks very grim. A review of the accompanying chart explains these dismal data. The broad money measure for Greece (M3) has contracted dramatically since the onset of the 2009 financial panic. Indeed, it's been contracting at a 6.04% annual rate. In consequence, the monetary approach to national income would predict a serious contraction in GDP — just what has occurred in Greece. We can expect further contraction of the Greek economy. It's already baked in the cake. Broad money (M3) growth has been in negative territory since December 2014, and it's currently contracting at a 9.77% rate. 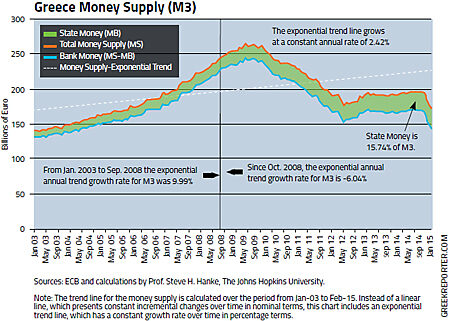 So, let's take a look at Greek banks — the all-important producers of money. To do that, we analyze the state of Greece's four largest banks which account for 87% of the total bank assets in Greece (see the accompanying table). 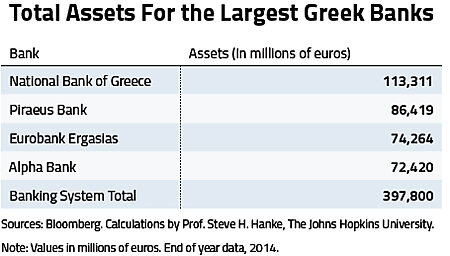 We use a little known, but very useful formula to determine the health of the Big Four. It is called the Texas Ratio. It was used during the U.S. Savings and Loan Crisis, which was centered in Texas. The Texas Ratio is the book value of all non-performing assets divided by equity capital plus loan loss reserves. Only tangible equity capital is included in the denominator. Intangible capital — like goodwill — is excluded. 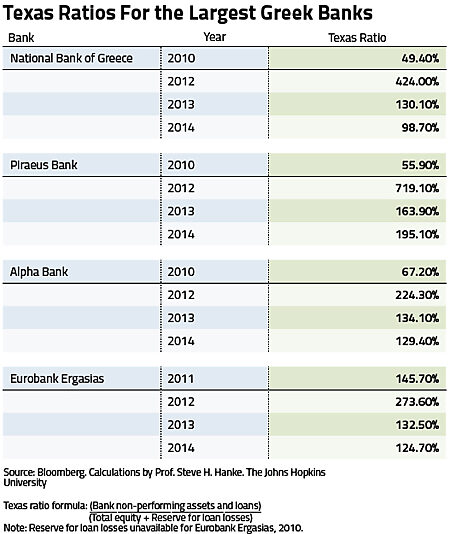 At the close of business last year, the Texas Ratios exceeded 100% for the Piraeus Bank, Alpha Bank, and the Eurobank Ergasias (see the accompanying table). And the national bank of Greece wasn't much better, with a ratio of 98.7%. Since the first of the year, the deposit bases of the banks, as well as the economy, have deteriorated markedly, suggesting that the Texas Ratios have also deteriorated. The banks are in big trouble, as indicated by their stock prices. Given that these prices (see the accompanying charts) are well below each bank's book values, the idea of raising fresh capital in the private markets is out of the question. After all, it would result in a massive dilution of existing shareholders. The state could inject new capital into the system. But, the state has no funds. So, Greece's banking system, which produces about 85% of Greece's money supply, is on the verge of being forced to shut down.

Another Greek debt default is just around the corner. And given that money dominates, the specter of an economic collapse is not out of the question. 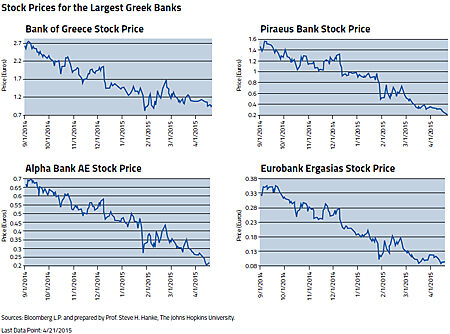