The most recent migrant firestorm concerns the caravan that has arrived at America’s Southern border. This migration, which started in Honduras, picked up thousands followers as it crawled across Mexico, with as many as 5,000 now camping in the Mexican border town Tijuana. In response to this so‐​called “invasion” — to borrow a word from President Trump — the President has ordered 8,000 troops to the border. If order can’t be sustained, Trump has indicated that he will drop the hammer and close the border all together.

Buried in President Trump’s fiery rhetoric is a point — an important point: sovereignty. As Prince Talleyrand put it in his “Instructions for the Ambassadors at the Congress of Vienna (Paris 1814)”: “Sovereignty is, in the general society of Europe, what private property is in civil society.” Yes, boundaries and borders are an important aspect of sovereignty and property. Neither sovereignty nor property is of much value if a country’s boundaries and borders aren’t protected, secure, and controlled.

Over the decades, the number of legal immigrants arriving on America’s shores has irregularly risen. Until World War I, the movement of peoples was relatively free. Immigration to the United States was restricted, only slightly, by the racist Oriental Exclusion Act of 1881 and the Foran Act of 1885, which limited the recruitment of contract labor. Following the Great War, the U.S. passed the Immigration Acts of 1919 and 1924. These were promoted by unions. Quotas were established along ethnic and nationality lines. In 1965, the U.S. dropped its rigid quota system based on ethnicity and nationality to make possible the entry of skilled peoples from any part of the world. So, the system has gone from relatively simple to what is now a complex maze of restrictions and regulations. 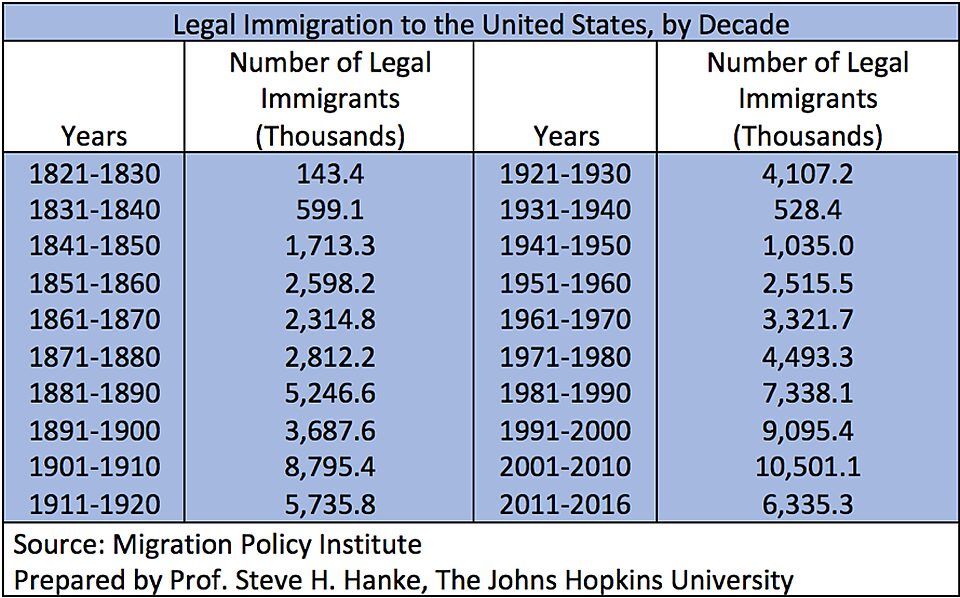 But, that’s only part of the story. The big driver of the political firestorm that engulfs debates about immigration is the large number of illegal aliens who have entered the United States. Recent work by the Pew Research Center shows that the number of “illegals” living in the U.S. peaked in 2007 at 12.2 million and has steadily declined since then, with slightly less than 11 million illegals residing in the U.S. in 2016. With a number of this magnitude, it’s rather clear that sovereignty is a real issue, as would be trespass violations on private property. Indeed, it’s obvious that the U.S. borders have not been secured and that the immigration firestorm will not subside until they are.

One reason for the movement away from unrestricted immigration is the birth and growth of the welfare state. Milton Friedman, a champion of free markets and free trade, had this to say about the free movement of peoples: “It’s just obvious that you can’t have free immigration and a welfare state.” Friedman puts his finger on an obvious hot button, one that inflames public opinion.

But, there is more to the position taken by the classical liberal Freedman. He appears to embrace what is a contradictory position — free trade and restrictive immigration policies — and to do so for purely pragmatic reasons. It turns out, that, if carefully thought through, free trade and restrictive immigration policies are, in principle, perfectly compatible.

Free trade and free markets result in the owners of goods and services exchanging them in a mutually beneficial way, without government interference. Indeed, the buyers agree to buy and the sellers agree to sell on mutually agreed terms. The government is passive—it only maintains the rules of the game.

When it comes to the movement of people, things are not the same as when goods and services are freely exchanged. Population movements, unlike the movement of goods in free markets, are not necessarily mutually beneficial events. These movements are not the result of an agreement between buyer and seller. Indeed, there can be shipments of immigrants without a willing recipient.