No sooner than Boris Johnson put his foot over the threshold of 10 Downing Street, the International Monetary Fund (IMF) offered its unsolicited advice to the newly elected Tory Prime Minister. Johnson won the right to replace the hapless Theresa May by pledging to remove Britain from the EU by October 31, 2019, “deal or no deal.”

Enter the IMF. In a preemptive strike, the Philosopher Kings threw cold water on the idea of a no deal, asserting that it would be a disaster. Talk about entering a domestic quarrel without an invitation.

But, such meddling is nothing new for the IMF. Indeed, a bipartisan Congressional commission (The International Financial Advisory Commission, known as the Meltzer Commission) concluded in 2000 that the IMF interferes too much in the domestic politics of member countries. Just recall the IMF’s involvement in toppling Indonesian President Suharto in 1998. This scandalous episode was confirmed by no less than former U.S. Secretary of State Lawrence Eagleburger. I would add that the IMF propensity to interfere has become much more pronounced since the days of the last great Managing Director of the IMF Jacques de Larosière (1978–1987).

The IMF, which was born in 1944, was designed to provide short-term assistance on the cheap to countries whose currencies were pegged to the U.S. dollar via the Bretton Woods Agreement. When these countries found themselves running short of foreign exchange (read: U.S. dollars), they could obtain balance-of-payments assistance from the IMF. This was the IMF’s rather straightforward original, narrow remit.

But, in 1971, when President Richard Nixon closed the gold window, the Bretton Woods exchange-rate system collapsed. And, with that, the IMF’s original purpose was swept into the dustbin. However, since then, the IMF has used every rationale under the sun to reinvent itself and expand its scope and scale. Unlike old soldiers, the IMF has not faded away. It has grown even larger and even more powerful. And, in the process of acquiring more power, it has become more political.

First, there were the oil crises of the 1970s. They allowed the IMF to rapidly reinvent itself. Those shocks, it was asserted, “required” more IMF lending to facilitate, yes, balance-of-payments adjustments. And more lending there was: in real (read: inflation adjusted) terms IMF lending more than doubled from 1970 to 1975, and increased by 58% from 1975 to 1982.

With the election of Ronald Reagan in 1980, it appeared that the IMF’s crisis-driven opportunism would finally be reined in. Yet, with the onset of the Mexican debt crisis, the political elites asserted that more IMF lending was required “to prevent financial contagion, more widespread debt crises, and bank failures.” Surprisingly, that rationale was used by none other than President Reagan, who personally lobbied 400 out of 435 congressmen to obtain approval for a U.S. quota (capital contribution) increase for the IMF. IMF lending ratcheted up again, increasing by a stunning 27% in real terms during Reagan’s first four years in office.

And then came the 1990s, a decade of explosive growth for the IMF. The collapse of Communism provided an opportunity that was too good to be true. Currency crises in Mexico, Russia, Turkey, Brazil, Argentina, and Asia added fuel to the fire that allowed the firefighters at the IMF to expand their balance sheet and create even more jobs for the boys. And as they say, the show just goes on and on, with the IMF playing the role of a hydra.

While the IMF’s ability to survive near-death experiences and thrive would not have surprised the British historian C. Northcote Parkinson, author of the 1957 classic Parkinson’s Law, it is quite remarkable in light of the IMF’s performance. As Harvard University’s Robert Barro put it, the IMF reminds him of Ray Bradbury’s Fahrenheit 451 “in which the fire department’s mission is to start fires.” Barro’s basis for that conclusion is his own extensive research.  His damning evidence finds that:

And if that’s not bad enough, countries that participate in IMF programs tend to be recidivists. In short, IMF programs don’t provide cures, but create addicts.

For a clear picture of the addiction problem (read: recidivism), review the chart below. It lists the number of IMF programs that 146 countries have participated in. Haiti leads the pack with 27 programs. Since Haiti joined the IMF in 1953, it has averaged about 2.4 years between new IMF programs. Argentina is another heavy hitter. It joined the IMF in 1956 and is now hooked on its 22nd IMF program. That’s a new program every 2.8 years on average. More broadly, the list of countries with the ten highest number of loan programs includes 27 countries. These countries account for 42% of the total number of IMF loan packages, indicating recidivism. Moreover, these repeat offenders gobble up a disproportionate amount of the IMF below-market rate loans, accounting for 60% of the total. 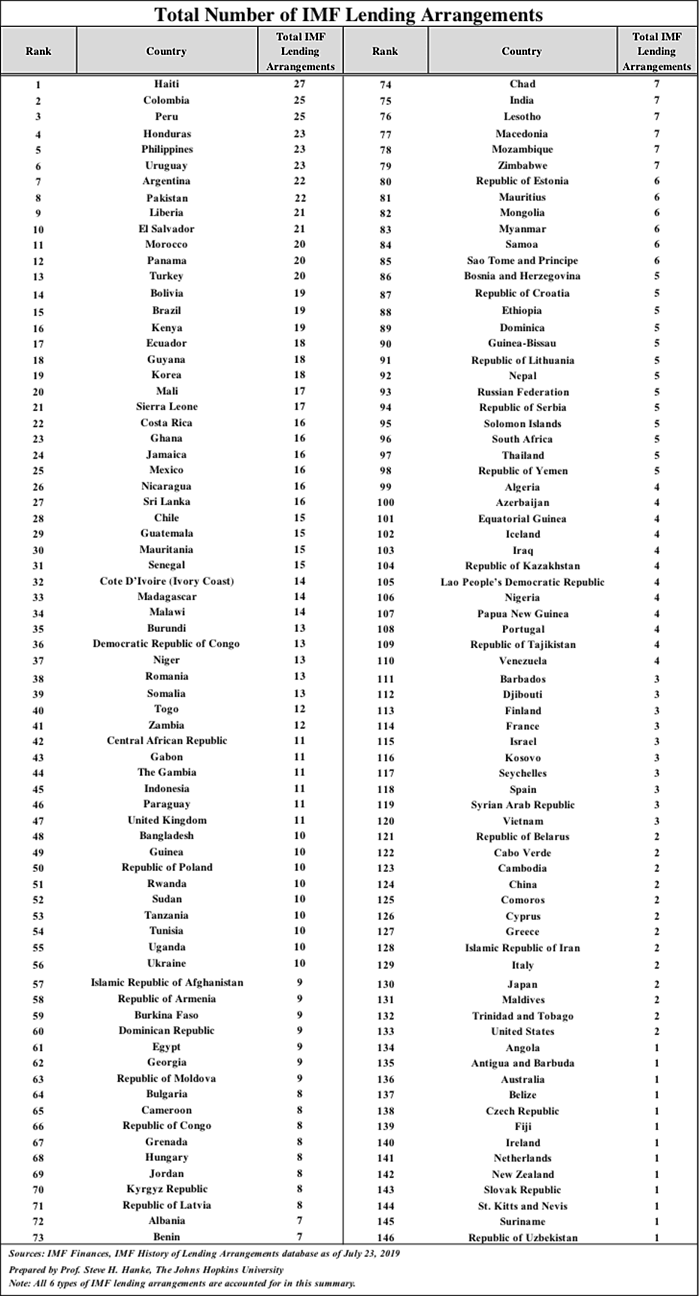 The IMF should have been mothballed and put in a museum long ago. After all, its original function was buried in 1971, and its performance in its new endeavors has been less than stellar. But, a museum for the IMF is not in the cards. Even reform is hard to imagine. Indeed, all attempts to reform and downsize the IMF have ended up expanding its scope and scale. Just look at what has been accomplished since the blue-ribbon Meltzer Commission.

About all we can do is realize that the IMF is a political hydra with an agenda to serve the wishes of the political elites who allow it to grow new heads.