From humble beginnings, the European Union has become a supra‐​national entity that at least superficially resembles a federal state, but which lacks sovereign power. It has its own flag, anthem, currency, President (five of them, actually) and a diplomatic service. Today, the EU is trying to grasp new powers, while, paradoxically, it is also facing mounting opposition and a growing probability of collapse. How did the EU get here? To understand the EU’s predicament, consider its past and present failures.

The EU was born in 1958, when six Western European nations created a free trade zone called the European Economic Community (EEC). There is an overwhelming consensus among economists that free trade stimulates economic growth. In fact, no country has ever become rich in isolation. The impact of the EEC on growth in Western Europe should not be overestimated, however. The intra‐​European tariffs on goods were not removed until 1968. As such, domestic reforms, such as Ludwig Erhard’s liberalization of the West German economy in 1948, were much more important to post‐​war recovery than the non‐​existent EEC.

Moreover, keep in mind that intra‐​European trade liberalization was taking place alongside global trade liberalization. The latter process, which used to be called the General Agreement on Tariffs and Trade and is now called the World Trade Organization, started in 1947 — at the insistence of the United States.

Europe has suffered from a number of self‐​inflicted wounds.

Over time, intra-EU trade has grown less, not more, important to European prosperity. The costs of communications, financial transfers and transport have been greatly reduced since World War II, making global trade increasingly lucrative to individual companies — whether they are in the EU or not. Trade between the United States and the EU, for example, continues to grow, even though there is no free trade agreement between the two. Similarly, British exports to the EU are growing at a slower pace than British exports to non-EU countries.

Moreover, economic benefits of intra-European trade have been undermined by a deluge of overregulation from Brussels. Contrary to popular belief, which holds that integration and prosperity go hand-in-hand, Western European growth has declined as European integration increased (see Figure 1). Today, much of Europe is not growing at all.

Some of Europe's woes have nothing to do with the EU and are connected to changing demographics — low birth rates and an ageing population. Yet Europe has also suffered from a number of self-inflicted wounds. Overregulation, which suffocates European growth, is only one of them. There are other destructive policies as well. 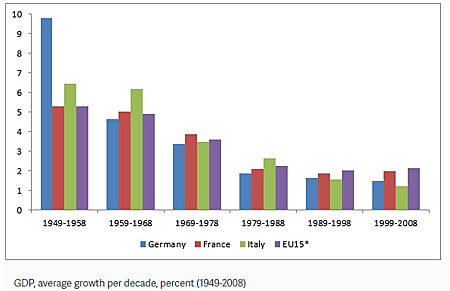 Source: Angus Maddison, Statistics on World Population, GDP and Per Capita GDP, 1-2008 AD, accessed on May 16, 2016. *The EU15 figures do not contain data for Luxembourg.

The Common Agricultural Policy, for example, has resulted in mountains of butter and lakes of milk. Those were later destroyed or dumped in Third World markets, where they undermined local producers. Accompanying the CAP was the Common Fisheries Policy that, instead of preserving Europe’s fish stocks through a quota system, nearly wiped them out. One Dutch study, for example, found that, to maintain their quotas, for every ton of fish headed for consumption, fishermen tipped “two to four tons of dead fish” overboard.

The Structural and Cohesion Funds, a system of transfer payments that used money from taxpayers in rich countries to try to spur growth and employment in Europe’s under-developed south, became a legendary boondoggle of financial misallocation and corruption. The European Court of Auditors has refused to sign off on the EU budget for some 20 years in a row — citing irregularities.

The euro was supposed to have led to increased growth, lower unemployment, and greater competitiveness and prosperity. According to “50 leading economists” who were brought together by the pro-EU Centre for European Reform, “there is a broad consensus that the euro had been a disappointment: the currency union’s economic performance has been very poor, and rather than bringing EU member-states together and fostering a closer sense of unity and common identity, the euro has divided countries and eroded confidence in the EU.”

In retrospect, it should be clear that the Eurozone was poorly designed. Its members have committed themselves to maintaining manageable levels of debt (capped at a maximum of 60 percent of GDP) and deficits (capped at a maximum of 3 percent per year). What the Eurozone lacked was a credible enforcement mechanism. Indeed, some of the biggest Eurozone members, including France and Germany, broke their debt and deficit commitments shortly after the launch of the common currency. Other countries followed suit.

Worse still, Eurozone membership has allowed some of Europe’s worst-managed economies to massively expand their debt by taking advantage of historically low interest rates. The markets lent money to Southern Europe, expecting that, if problems arose, the latter would be bailed out. The markets were correct. Thus, when the southern economies crashed, their creditors — chiefly European banks — were bailed out at a massive cost to the European taxpayer. As ever, a problem that was created by deeper integration has led to calls for “more Europe” and the establishment of a “fiscal union.”

In recent years, another serious problem has emerged: uncontrolled immigration from Africa and the Middle East. While immigration can be a force for good, European countries have been generally unsuccessful at integrating foreigners. Some of that failure has to do with government policies, such as extensive welfare provisions and labor market restrictions that keep immigrants out of the workforce, and some have to do with a particularly European understanding of nationhood, which is based on ethnicity, not citizenship.

Rightly or wrongly, a pan-European immigration policy, which has allowed for a large influx of foreigners whom Brussels is now trying to forcefully “redistribute” among the member states, has succeeded in awakening an epic level of resentment.

The euro bailout and the mishandling of the immigration crisis have elucidated one of the least appreciated, but one of the most consequential negative aspects of European integration: the assault on the rule of law.

Clearly, Article 125 of the Lisbon Treaty states that each EU member state is responsible for its own debts. It is inconceivable that the Eurozone would ever have been born without that vital stipulation, which was necessary to assuage the concerns of the German electorate. Moreover, Article 123 prohibits the ECB from buying sovereign bonds in primary markets and sovereign bonds in secondary markets — if the latter is done for fiscal as opposed to monetary reasons. Brussels and Frankfurt have ignored both stipulations in order to keep Greece in the Eurozone.

Similarly, the Dublin Regulation specifies that asylum applications by those who seek protection under the Geneva Convention in the EU must be examined and processed at the point of entry, which is to say by the first EU member state that they have arrived in. Greece, and to a lesser extent Italy, have failed to fulfill their obligations and allowed hundreds of thousands, possibly millions, of asylum seekers to migrate to other EU states, including Germany. The German government, in turn, has unilaterally decided to welcome these migrants only to then demand that they be proportionately distributed among other EU countries.

Putting the humanitarian question aside, even the EU member states which never received asylum seekers in the first place, and which had no say in “letting” them into the EU at large, are now being forced to accommodate them. The member states have responded to the EU threats by breaking with their Schengen area commitments and erecting barriers to keep the immigrants out — thus exacerbating the assault on the rule of law in Europe.

As Great Britain prepares to vote on its membership of the EU, it is useful to remember not only the EU’s success in reducing trade barriers between EU countries, but also of EU’s many failures, which is precisely why the British continued membership of the EU is no longer a foregone conclusion.