As we entered the dog days of summer, a flurry of negative economic news surfaced. The news from Continental Europe was worse than anticipated, catching most observers by surprise. Those who were caught off guard failed to keep their eyes focused on money and credit. In addition, they neglected to gauge geopolitical events and the state of economic confidence.

For example, when Bill Clinton entered the White House in 1993, the structural fiscal deficit was 5.3% of potential GDP. In the ensuing eight years, President Clinton squeezed out the fiscal deficits. When he left office in 2001, the government's accounts registered a structural surplus of 1.5%. Those Clinton years were marked by tight fiscal and loose monetary policies. The result was rapid economic growth. The reverse occurred in Japan during the 1990s. In an attempt to restart the economy, Japan engaged in repeated, massive, fiscal stimuli programs. These programs failed because monetary policy was tight.

The endless, post-crisis talk about fiscal austerity is misguided. When an economy is in a slump, all eyes should be on monetary policy.

With this monetary perspective, let's take a look at recent news from Continental Europe's three largest economies: Germany, France and Italy. Germany, Europe's economic locomotive, surprised everyone, shrinking by 0.2% in the second quarter of the year. The accompanying German money and credit chart tells the tale. Since early 2012, the money supply, broadly measured, has registered very anemic growth and credit has been declining. This tight monetary stance, coupled with the economic sanctions blow back from Russia, has taken the steam out of the German locomotive. 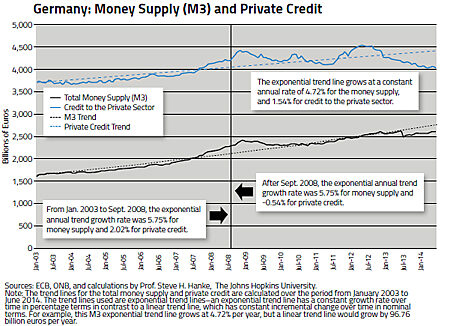 Recent economic data from France weren't much better than those from Germany. Growth was flat for the second quarter in a row. With no growth, and no growth in sight, Michel Sapin, the French finance minister, threw in the towel and announced that France would not be able to meet its fiscal deficit target of 3.8% of GDP. A review of France's money and credit picture shows why the economy is flat lining: money and credit growth have been flat since early 2012. 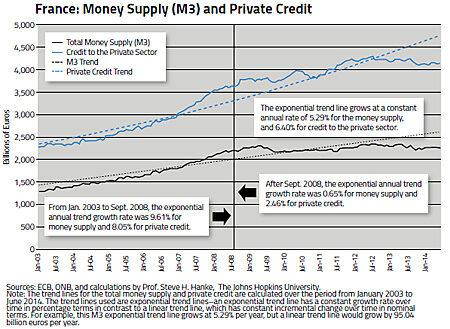 Prime Minister Matteo Renzi's Italian honeymoon ended abruptly in early August, when Italy achieved a rare feat. It entered a triple-dip recession. Yes, Italy's economy contracted for two successive quarters for the third time since 2007. As the accompanying chart shows, money growth in Italy has been flat for some time, and credit has been slowly shrinking since early 2009. 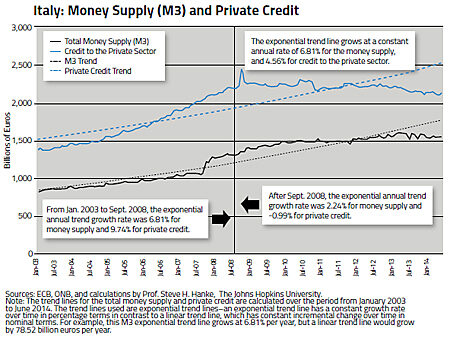 Why are Continental Europe's three largest economies in the grip of monetary austerity? To answer this, we must revert back to John Maynard Keynes at his best. Specifically, we must look at his two-volume 1930 work, A Treatise on Money — a work that Milton Friedman wrote about approvingly in 1997.

In particular, Keynes separates money into two classes: state money and bank money. State money is the high-powered money (the so-called monetary base) that is produced by central banks. Bank money is produced by commercial banks through deposit creation. Keynes spends many pages in the Treatise dealing with bank money. This isn't surprising because bank money was much larger than state money in 1930. Well, not much has changed since then. Today, bank money accounts for about 90% of the total Eurozone money supply, measured by M3.

So, bank money is the elephant in the room. Anything that affects bank money dominates the production of money. Bank regulations and their application have been aggressively ramped up since the crisis of 2009. These new regulations have been illconceived, pro cyclical, and fraught with danger, as the charts show.

Continental Europe's economic performance is, however, not only a problem of banks failing to produce money and credit; Europe's stagnation and slump are also the result of major structural economic rigidities (read: lack of free markets). Mario Draghi, the President of the European Central Bank, has repeatedly called for structural reforms in Europe's product and labor markets. He has a point. If market liberating reforms were implemented, they would give a much-needed confidence shock to the Eurozone.

Regardless of the particular problem being analyzed or the analytical apparatus used to diagnose it, confidence plays a critical role. Economists have long recognized the importance of confidence. Indeed, most economists find extremes hard to explain — either booms or busts — without reference to it. For example, the American economist Wesley Clair Mitchell (1874-1948) wove "business sentiment" into much of his pioneering work on business cycles. He was not alone.

Members of the Cambridge School of Economics, which was founded by Alfred Marshall (1842-1924), all concluded that fluctuations in business confidence are the essence of the business cycle. As John Maynard Keynes put it, "the state of confidence, as they term it, is a matter to which practical men pay the closest and most anxious attention." That is, of course, why Keynes put great stress on changes in confidence and how they affected consumption and investment
patterns. Frederick Lavington (1881-1927), a Fellow of Emmanuel College and the most orthodox of the Cambridge economists, went even further in his 1922 book, The Trade Cycle. Lavington concluded that, without a "tendency for confidence to pass into errors of optimism or pessimism," there would not be a business cycle.

Confidence enters into more modern discussions of business cycles, too. Robert Lucas, a Nobel Laureate and member of the Chicago School of Economics, has developed rational expectations tools for economic analysis. For members of the Chicago School, the credibility of government policies (read: their consistency and plausibility) is the major source of changes in confidence, and consequent swings in the business cycle.

The Cambridge economists rely on surveys of sentiments held by businessmen and consumers. These survey metrics are used to construct forecasts of economic activity. As reported in August, Germany's investor confidence index plunged — fueled by tensions with Russia — to a 20-month low. In France, the manufacturing business climate index has been falling for months. Italy's consumer confidence index was temporarily boosted, following Prime Minister Renzi's election in May, but has turned south since then.

If we move from Cambridge to Chicago, we find that the rational expectations crowd points to government policy as a generator of swings in confidence. In particular, these economists believe that the state of confidence hinges on whether governments and their policies are viewed as credible. This amounts to a perception about whether the various elements of a government's policy are logical and consistent. If policies are viewed as being illogical and/or internally inconsistent, confidence suffers. On this criterion, Continental Europe's confidence is very low. Many people believe that politicians are serving up a never-ending stream of ad hoc, incoherent, if not contradictory, policies.

Any way one looks at Continental Europe, the economic, political and geopolitical picture is not pretty.