Skip to main content
Live Now
This article appeared on The Federalist on April 24, 2015.
TOP

A curious thing happened to Wisconsin Gov. Scott Walker on his way to Republican primary: he confused everybody with a statement on immigration. The essence of Walker’s statement is that he talked to Sen. Jeff Sessions (R‐​Alabama), the chief opponent of legal immigration, and said that the “next president and the next congress need to make decisions about a legal immigration system that’s based on, first and foremost, on protecting American workers and American wages.” Understandably, people on every side of the immigration issue assumed Walker’s statement indicated opposition to increased immigration.

In 2013 Walker supported legal immigration, stating that “[i]f people want to come here and work hard and benefit, I don’t care whether they come from Mexico or Ireland or Germany or Canada or South Africa or anywhere else.” Now, by adopting some of Sessions’ talking points on immigration, Walker has seemingly moved to the polar opposite of his 2013 position. After all of the abuse heaped on him by liberals and Democrats, for Walker to buckle almost immediately to the Know‐​Nothing wing of his party is rather startling.

But did Walker actually change his mind? He said he did and gave a reason why: He “talked to Senator Sessions and others out there” on the immigration issue. So he did actually switch to opposing legal immigration.

Walker should have stuck with the opinion of economists and, increasingly, that of the American people.

Now that Walker has consulted with the Senate’s most entrenched opponent of immigration, it’s only fair that he should now investigate the vast economic literature that overwhelmingly finds immigration to be beneficial to the economy. Now it’s time to ask some economists and chat with some Gallup pollsters.

Walker's statement about protecting the economic prospects of Americans shouldn't translate to opposing immigration. The economic research is fairly one-sided. Immigration of lower-skilled workers has very little effect on American wages. The most negative finding in the peer-reviewed academic literature is from Harvard University economist George Borjas. His 2003 paper finds that the wages of high-school dropouts fell by 8.9 percent, relative to workers in other skill levels, from 1980 to 2000. Overall, he found that the wage of the average American worker declined by 3.2 percent due to immigration at that time. Borjas' paper is ground-breaking theoretically but it assumes a fixed supply of capital in the economy—a condition that limits its usefulness for policy analysis.

But even holding the supply of capital as fixed, extending Borjas' time period of analysis to 2010 essentially voids his findings. This recent paper used Borjas' methods but includes the wage data up through 2010, finding effects so small that they are insignificant. That is a serious rebuttal to Borjas' findings. Furthermore, Borjas admits that immigration does help Americans more than it harms them, but with some distributional consequences. The results from Borjas' research are far more positive than his most enthusiastic supporters care to admit.

Economists Gianmarco Ottaviano and Giovanni Peri take up Borjas' challenge and assume that capital adjusts in response to immigrant inflows. They find that immigrants have a very small effect on the wages of native-born Americans without a high school degree (-0.1 percent to +0.6 percent) and an average positive effect on all native workers of about +0.6 percent.

About that Supposed Negative Wage Effect

The editors at National Review cherry-pick statistics from these two very different studies. They are fond of pointing out that new immigrants lower the wages of older immigrants by 6.7 percent but neglect the positive wage impacts on native-born American workers from the very same academic paper. Instead, they get their more pessimistic data from the different Borjas study that holds the supply of capital as constant. Both academic papers need to be considered in the immigration debate, but cherry-picking of this sort obscures the evidence rather than illuminating it.

How can it be that an increase in the supply of workers also increases wages? Research by Giovanni Peri and Chad Sparber sheds light on that. They find that increases in lower-skilled immigration induce lower-skilled natives to specialize in jobs that require communication in English, a skill they have, while the immigrants specialize in jobs that are more manual-labor intensive.

Communication jobs are more highly compensated than manual-labor jobs. This more efficient division of labor by skill, called complementary task specialization by economists, reduces the downward wage pressure because natives react by adapting and specializing in more highly paid occupations, not by dropping out of the job market. This effect decreases wage competition between lower-skilled natives and immigrants by around 75 percent. Related to those findings, Peter Henry found that low-skilled immigrants to an area induced natives to improve their school performance so that they wouldn't have to compete with lower skilled immigrants. Instead of forcing Americans out of the labor market, immigrants push Americans up the skills ladder.

And the Immigration Surveys Say

Another survey reported by economist Bryan Caplan asked economists whether various factors can explain why the economy is not doing better. A score of 0 means “no reason at all,” 1 means a “minor reason,” and 2 means a “major reason.” Economists on average rated immigration as a 0.20 compared to Americans who rated it as a 1.22. Those who are informed about immigration and who study its economic effects for a living do not think it is a problem.

Of those three groups, polls of the general public reveal the most hostility—but they are not as negative as portrayed. John Hinderaker uncritically pasted a press release or email from Sessions’ staff about public polling on the issue. According to a recent Gallup poll, 60 percent of Americans are dissatisfied with the current immigration system, while 33 percent are satisfied. Of those dissatisfied, 39 percent wanted less immigration and 7 percent wanted more. However, that 39 percent figure is down from 65 percent in 1995—a remarkable decrease in just 20 years. 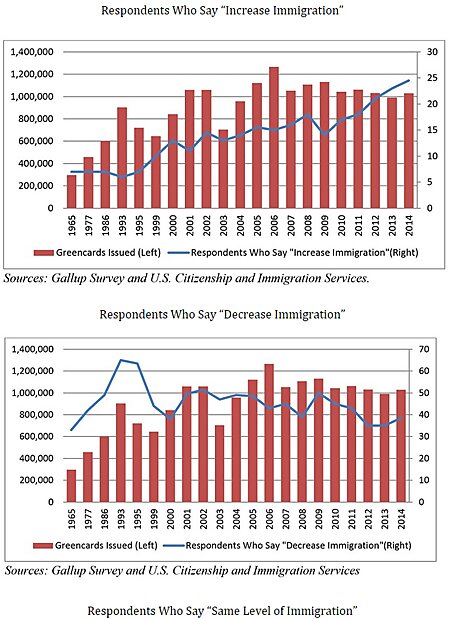 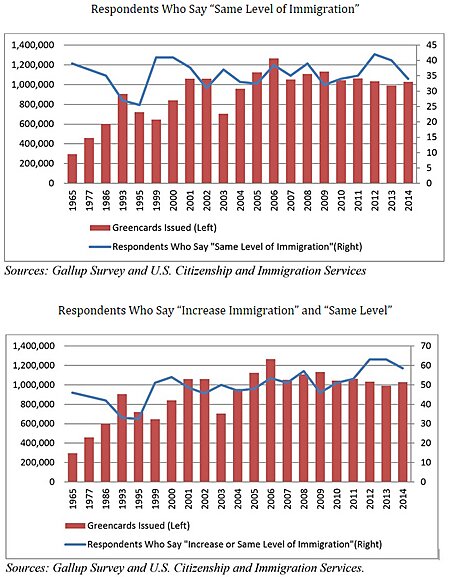 In a recent Washington Post op-ed, Sessions wrote that the pro-legal immigration “elite consensus is crumbling.” Before writing that op-ed, Sessions should have looked at the numbers. Economists and, more importantly, the American people have a far more positive view of immigration than he does.

Walker bravely stood up to the bad economic ideas Democrats have put forward. But a successful Republican presidential candidate also needs to stand up to the lousy economic ideas put forward by members of his own party. Although Walker’s statements do not necessarily mean that he now opposes legal immigration, it’s more probable than not that he’s shifted toward the anti-immigration caucus in the GOP. Walker should have stuck with the opinion of economists and, increasingly, that of the American people.