The specter of currency wars once again haunts the international chattering classes. Remember back in 2011, when Brazilian finance minister Guido Mantega blamed the U.S. for deliberately weakening the greenback to gain a competitive advantage? Well, now the shoe is on the other foot.

The Yen — an important regional currency — recently sank to a seven-year low against the now mighty U.S. dollar (USD). This is putting downward pressure on the Korean won and other Asian currencies. The situation is similar in Africa where the Kenyan shilling has hit a three-year low against the USD; the Nigerian naira recently set an all-time low against the dollar; the Ghanaian cedi has shed over 25 percent of its value against the greenback this year. The big Latin American loser is the Venezuelan bolivar, followed by the hopeless Argentine peso. Moving to Europe, Ukraine’s hryvnia has lost over 88 percent of its value against the USD this year, while the Russian ruble has racked up a loss of over 43 percent against the greenback in the same time span. The list could go on, but let’s focus on Russia and the travails of the ruble.

The ruble, while it has not been hit as hard as the hryvnia, has sharply depreciated because of the Russian-Ukrainian conflict and the sanctions that it has spawned. The sanctions are, of course, a mug’s game. Indeed, sanctions have almost universally failed to achieve their objectives. The one thing they do, though, is to impose real costs on many intended and unintended victims, including the international economic system. It is noteworthy just how predictable the unintended consequences are. While the sanctions imposed against Russia have clearly contributed to ruble weakness, they have massively strengthened President Vladimir Putin’s hand.

Thanks to the sanctions imposed against Russia, President Putin’s support rose to 88 percent in October, according to Russia’s most independent polling group, the Levada Center. Undoubtedly, Putin got another boost in the polls after the shabby treatment he received in Brisbane, Australia at the meeting of the Group of Twenty (G20).

Diplomacy is dead. This is dangerous. As Clifford Gaddy, a Russian expert at the Brookings Institution in Washington, D.C., recently remarked, “I fear very much that ... there is an element of sleepwalking in the policies of key players in today’s world.” Gaddy was alluding to Christopher Clark’s recent book, The Sleepwalkers, which chronicles the origins of the First World War.

In addition to the Russian-Ukrainian conflict, the ruble has been put under pressure because of the recent slide in the price of oil. As the accompanying chart shows, Russia’s fiscal accounts balance when the price of oil is about $102 per barrel. If the present price of less than $80 per barrel persists, it will put most oil producers, including Russia, in a fiscal squeeze. 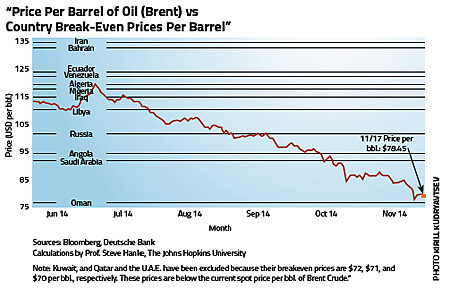 The ruble's dive has been associated with the plunge in the price of oil, coupled with a series of damaging events (see the accompanying chronology). These events are indicated on the next chart which shows the course of the ruble against the USD. Also shown are the 10- and 40-day moving averages for the RUB/USD exchange rate, as well as the price of Brent crude per barrel. 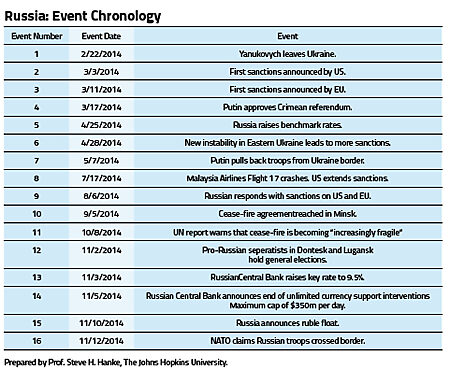 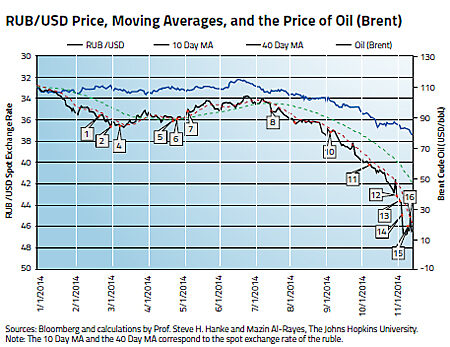 But, that's not the end of the story. As the next chart shows, the ruble's volatility has soared. Indeed, whiplash collars should be standard issue for the brave souls who are trading the ruble. 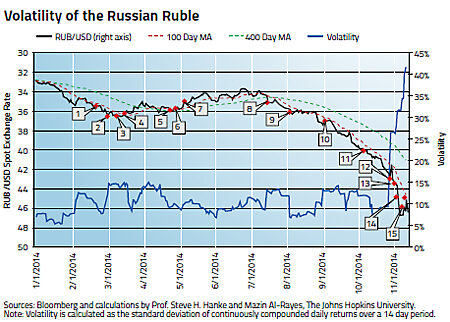 The ruble charts look pretty ugly, but they contain a bit of a silver lining, in the short-term. The depreciating ruble means that Russian imports will be more expensive and exports more competitive. This combination will help keep Russia’s current account positive, which will offset some of Russia’s massive capital flight.

In addition, Russia’s fiscal accounts are denominated in depreciating rubles and its oil exports are invoiced in an appreciating USD. So, the fiscal blow from lower oil prices will be cushioned by a weak ruble. Perhaps it was a weak ruble strategy that Putin was alluding to when he recently stated that Russia was braced for a “catastrophic” slump in oil prices.

But, there are limits to any temporary benefits from a ruble rout. When a currency takes a dive, the specter of inflation is always right around the corner. And with inflation, Putin will see his poll numbers come off their highs. What to do?

Russia should abandon the floating exchange-rate regime, which it adopted on November 10th. Oil and other commodities that Russia exports, are priced and invoiced in U.S. dollars. By embracing a floating exchange-rate regime, Russia is inviting instability. The ruble’s nominal exchange rate will fluctuate with oil and other commodity prices. When the price of oil rises (falls) the ruble will appreciate (depreciate), and Russia will experience a roller-coaster ride distinguished by deflationary lows and inflationary highs. To avoid these wild rides, most of the big oil producers — Saudi Arabia, Kuwait, Qatar and the United Arab Emirates — link their currencies to the U.S. dollar. Russia should do the same.

Under a currency board system a central bank issues notes and coins. These are convertible into a foreign reserve currency at a fixed rate and on demand. As reserves, the monetary authority holds high-quality, interest bearing securities denominated in the reserve currency. Its reserves are equal to 100 percent, or slightly more, of its notes and coins in circulation, as set by law. A central bank operating under a currency board rules does not accept deposits and it generates income from the difference between the interest paid on the securities it holds and the expense of maintaining its note and coin in circulation. It has no discretionary monetary policy. Instead, market forces alone determine the money supply.