When taking a glance at the performance of investments in stocks, currencies, and commodities — which is compiled by the Wall Street Journal for the second quarter of 2018 — one is struck by the fact that all of the top five performers were commodities. Lean hogs took the top honors, followed by crude oil.

Crude’s position didn’t surprise me. Way back in February 2016 — when West Texas Intermediate (WTI) was trading at $26/bbl. — I was confident that crude oil would make a relentless climb. How could I have been so confident then, and confident now, that today’s WTI price of $69.50/bbl. will climb to $75/bbl. by year’s end?

To answer these questions, we must have a model — a way of thinking about the problem. In this case, the starting point is Roy W. Jastram’s classic study, The Golden Constant: The English and American Experience 1560-2007. In that work, Jastram finds that gold maintains its purchasing power over long periods of time, with the prices of other commodities adapting to the price of gold.

In support of this model, it is worth pointing out that a free-market economic system is an organism, and operates as such. Each organism is organized to maintain a certain “state” of homeostatis, to borrow a term from physiology. Any disturbance from the equilibrium sets in motion behavior within the organism which tends to re-establish the desired state of equilibrium. For example, the human body has a complex physiochemical equilibrium, which involves, among other things, a constant body temperature. If the equilibrium is disturbed, the body acts to restore the homeostatis or equilibrium.

There is a homeostatis in the structure of commodity prices, too. Any disturbance in this structure, which is anchored with the price of gold, sets in motion forces which will restore the status quo. So, the homeostasis of the commodity price system explains why the oil-gold price ratio reverts back to its mean of 0.0704 when the ratio has been disturbed. 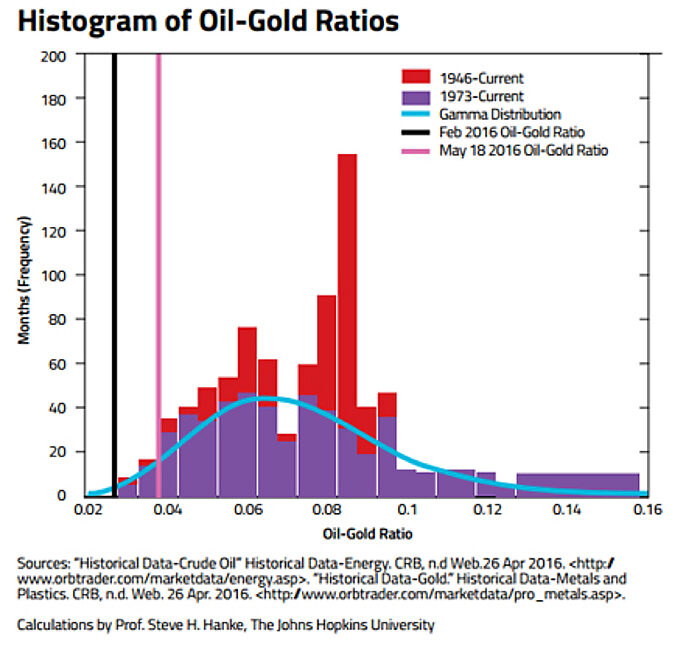 Just what forces kicked in to start crude's relentless price climb and force the oil-gold price ratio to revert back to its mean? Well, at bargain basement prices, the quantity of crude demanded increased. And, on the supply side, the major oil companies slashed capital expenditures for drilling and exploration. The majors reined in their capital spending appetites by 40-50%. Indeed, now few mega projects are on the drawing boards. Not surprisingly, oil and gas field discoveries are at a 60-year low. So, the disturbance of the homeostatis set in motion supply-demand forces to restore the status quo.

To understand the adjustment, consider my old Professor Ken Boulding's Bathtub Theorem: If production (the flow from the faucet) is less than consumption (the flow down the drain), it is clear that the oil in inventory (the economic bathtub) must fall. That's just what's been going on as the oil-gold price ratio re-establishes itself and reverts towards its homeostatis.

But, how long will it take for the ratio to mean revert? My calculations (based on post-1972 data) are that a 50 percent reversion of the ratio will occur in 12.3 months. This translates into a price per barrel of WTI of $75 by January 2019. It is worth noting that, like Jastram, I find that oil prices have reverted to the long-run price of gold, rather than the price of gold reverting to that of oil. So, the oil-gold price ratio primarily reverts to its mean via changes in the price of oil. 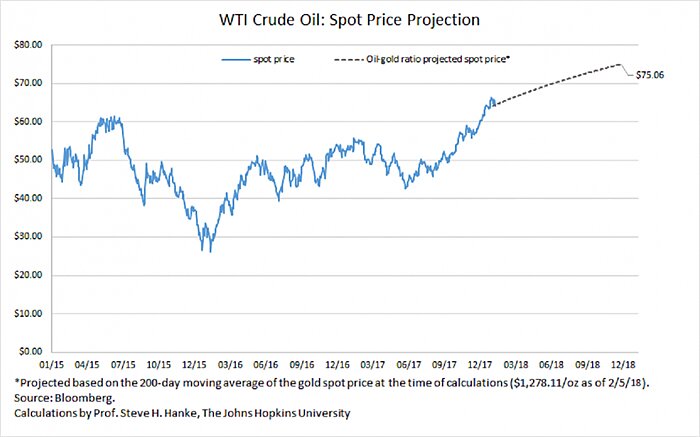