With today’s high stock market multiples and the current crypto currency craze, a great deal of ink is being spilled about bubbles or potential bubbles. Just a few years ago, in the wake of the Lehman Brothers bankruptcy, the wags were all in a flutter about the alleged post‐​housing bubble, the ills of austerity and the need for interventionist economic policies. Yet another bubble story.

In an attempt to make their reportage more interesting, financial journalists and op‐​ed writers often tend to put a speculative episode or event in the fundamentally inexplicable bubble pigeon hole. Indeed, bubble explanations are often clutched as a first, not a last, resort. As Peter Garber, the leading expert on bubbles, laments in his classic Famous First Bubbles: The Fundamental of Early Manias(The MIT Press, 2000):

“Bubble” characterizations should be a last resort because they are non‐​explanations of events, merely a name that we attach to a financial phenomenon that we have not invested sufficiently in understanding. Invoking crowd psychology — which is always ill defined and unmeasured — turns our explanation to tautology in a self‐​deluding attempt to say something more than a confession of confusion.

Indeed, the banal explanations of Tulipmania have diverted all attention from the analysis of the market fundamentals that were involved. And again, another edifying Garber lament on the so‐​called Mississippi and South Sea Bubbles:

The bubble interpretation has relegated the far more important Mississippi and South Sea episodes to a description of pathologies of group psychology.

This brings me to John Law and his Mississippi Company, which was established in 1717 and collapsed in 1720 and is a standard reference that accompanies most discussions of bubbles and Ponzi schemes. In fact, the only obvious connection between Law’s Mississippi Company and bubbles and Ponzi schemes is that their values have gone up and then down. This fact should fail to merit mention.

What merits attention is that Law was an economist of note and a precursor to John Maynard Keynes and Keynesian economics. Indeed, Law’s Essay on a Land Bank (1704) and Money and Trade (1705) brought high praise from no less than Joseph Schumpeter, who wrote in A History of Economic Analysis (1954):

John Law (1671–1729) I have always felt in a class by himself. He worked out the economics of his projects with a brilliance and, yes, profundity, which places him in the front ranks of monetary theorists of all time.

John Law's link to today's economic and financial turmoil and policy debates is a Law-Keynes linkage. Like Keynes, Law thought the economy could be stimulated by grand public works and public-private partnerships. Indeed, both economists supported the idea of an active, interventionist government. That said, Keynes curiously avoided mentioning Law when noting the antecedents to the ideas contained in The General Theory of Employment, Interest and Money(1936). Perhaps Keynes didn't want to be associated with Law's Mississippi System — a grand project that ended in failure.

The opportunity for Law to implement his ideas arose after Law learned that the Duke of Orléans, his good friend, had become the regent of France. In 1710, the Scotsman emigrated from London to Paris. France was in financial trouble. Among other things, it was in partial default on its bonds. In consequence, the regent was susceptible to Law's proposals.

In June 1716, Law launched his first big project. It was then that the Banque Générale was established. It issued paper money that was not fully backed by specie (gold or silver). Instead, government bonds were used to back 50% of the paper money issued by the Banque Générale. This fractional reserve setup was approved by the Crown, and the Banque's paper money was granted legal tender status.

This represented a breakthrough for Law because one of his ideas was to replace specie-based banking systems with credit-based systems. Instead of counterbalancing banks' liabilities (paper money and deposits) with gold or silver assets, the liabilities in a credit-based system would be counterbalanced with loans. The T-accounts below highlight the differences between these two systems. 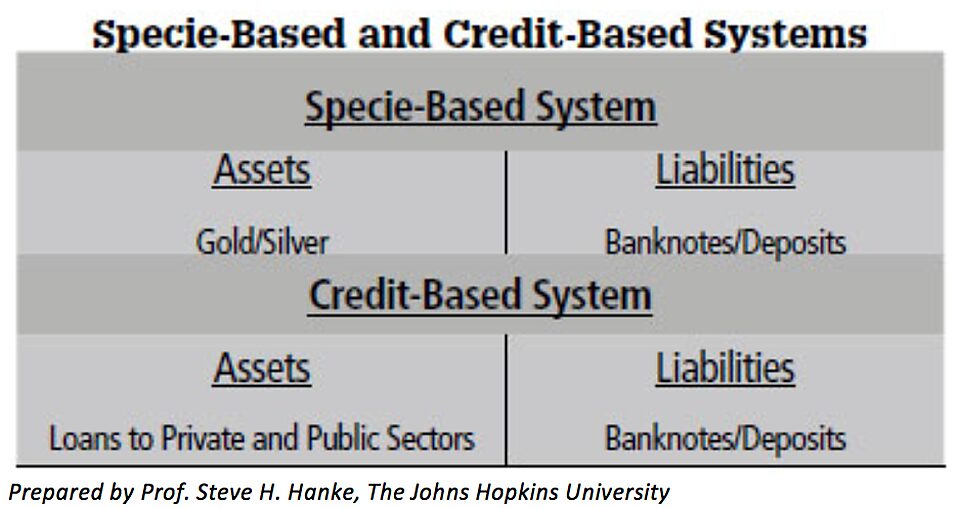 Law's next venture was the establishment of the Mississippi Company. It was granted monopoly rights for trade and development in France's Louisiana and Canadian territories. And through a series of takeovers and mergers, it became a giant holding company that controlled a vast empire of French trading companies. In short, France privatized its treasury under Law's plan. The Mississippi Company took over most of the financial functions of the Crown. These included the sole right to coin money, to collect all direct and indirect taxes, and to manage the Crown's debt.

When it came to debt management, Law displayed his flair for innovation. The Mississippi Company was created, in part, to facilitate a debt-for-equity swap in which the company's shares were issued in exchange for the Crown's debt. In consequence, the Crown was able to unload its entire stock of high-yielding debt. The British, not to be outdone by the French, followed Law's lead and allowed the South Sea Company to assume the bulk of the British government's debt.

With the prospect of spectacular returns, Paris became swollen with investors from all parts of Europe. And as the chart below indicates, the price of the Mississippi Company's shares soared. So did Law's fortunes. Among other things, in December 1719, he was appointed controller-general of finances — a position that made him the virtual prime minister of France. 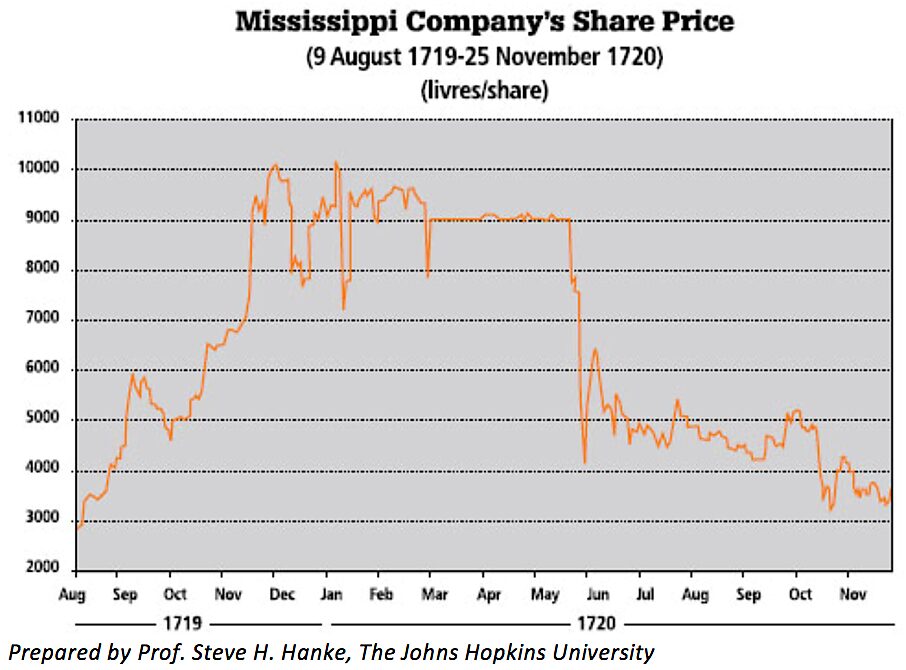 Richard Cantillon (1680/90?-1734), a great economic theorist (arguably the father of modern economics), financier and advocate of specie-backed money, succeeded in making two fortunes from Law's Mississippi System. The first was made on the rising market for Mississippi Company shares. Cantillon's second fortune was made on exchange-rate speculation. He spotted a fatal flaw in Law's strategy: the increase in the issue of banknotes unbacked by specie that were required to put a floor under the Mississippi shares at 9,000 livres per share. Accordingly, Cantillon concluded that the monetization of Mississippi shares would result in a surge in the money supply and a sharp fall in the value of the livre against the pound sterling. In consequence, he took a large speculative position against the French currency — an action that made him a fortune and caused Law to expel Cantillon from France.

This brings me back to the present and the Law-Keynes linkage. As ever-larger public works and public-private partnerships are contemplated, it might be worth reflecting on the fate of John Law's Mississippi System. Today's these much-touted partnership are fraught with danger and must be handled with care.