One of the abiding myths of “development economics” has been that economic growth accompanied by an increase in inequality will not “trickle down” to the poor. My multi‐​country comparative study with Hla Myint, The Political Economy of Poverty, Equity and Growth, provided arguments and evidence against this view. The study encompassed 21 developing countries’ economic history from 1950 to around 1990. India’s and China’s recent growth experience has shown that, despite rising inequality, rapid growth has not only “trickled down” to the poor but it has become a flood, leading to the largest alleviation of low‐​end poverty in history. Yet from the recent statement by India’s former finance minister on his accession to the presidency, to US President Barack Obama’s second inaugural speech, this red herring is again being presented. The Great Crash of 2008 — and the obscene incomes derived from rent‐​seeking by bankers it exposed — has led to public anger being expressed in the Occupy movements and brought questions about inequality to the fore. As have the disclosures of the huge accumulation of wealth by China’s nomenklatura through corruption.

In discussing these issues of inequality, poverty and growth, it is important to distinguish the rising inequality that can be part of the normal growth process — where entrepreneurial incomes are rising through undistorted market forces — from those created by various forms of rent‐​seeking. The latter is unjustified, but not the former.

In the US, there is a growing narrative — propounded by many academic and popular writers on the Left and embraced by President Obama — that increasing inequality will hold back growth and impoverish the poor and middle class. As President Obama put it in his second inaugural address: “Our country cannot succeed when a shrinking few do very well and a growing many barely make it.”

In the US, there is a growing narrative that increasing inequality will hold back growth and impoverish the poor and middle class.

In a forensic examination of this "declinist" literature, Scott Winship of the Brookings Institution ("Overstating the costs of inequality", National Affairs, Spring 2013) graphs the income growth of the bottom fifth, middle fifth and the top five per cent of the US income distribution for sub-periods from 1948 to 2007 — which were both business cycle peaks — into six roughly 10-year periods (each starting and ending with a peak). The inequality between the poor and the middle class in all these periods, except the 1980s, "grew only modestly or declined. Indeed, the decline in inequality between the poor and the middle class during the 1990s was so great that, despite a partial reversal in subsequent years, inequality between these groups in 2007 was no higher than it was in 1989". Between 1969 and 2007, the incomes of the bottom fifth rose by 46 per cent; while they increased 63 per cent for the middle fifth. 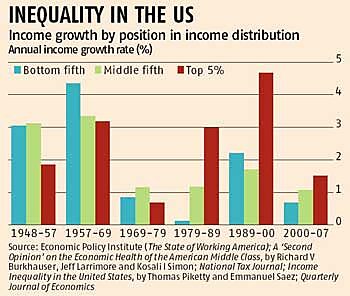 There has, however, been a dramatic increase in high-end inequality since 1979 — comparing the poor and middle fifth with the top five per cent. This contrasts with the previous 30 years when the poor and middle classes saw bigger rises than the rich. But this does not mean that the incomes of most Americans have stagnated while those of the rich have soared. The middle fifth "was actually more than one-third richer in 2007 than it was in 1979". Moreover, "the median family today has nearly twice the purchasing power of its counterpart in 1960" and so "such growth could be called 'stagnation' only in relation to the golden age of the post war boom, when the incomes of the middle fifth of Americans doubled over 20 years".

It has been claimed that the current status quo is unfair as workers' pay has not kept up with productivity increases, so that the income gains for the top five per cent were stolen from the middle classes, in contrast with the golden age when workers' pay rose faster than productivity. Mr Winship argues that this was because "compensation outpaced productivity growth during the mid-20th century (in the peak years of unionism) and recent decades have seen a correction in which productivity levels have had to catch up to pay". There is no case to decry the ending of the monopoly rents earned by unionised workers, just as there are none (as I have argued in this column) for those earned by bankers who exploited the moral hazard created by deposit insurance to feather their own nests.

But does increasing inequality damage growth? Much of the evidence cited is that of cross-country regressions of developing countries. But these econometric studies are plagued by the so-called problem of "identification", which is required to determine causality. Does inequality cause lower growth rates? No robust answers can be provided by these cross-country econometric studies (see my Poverty and Progress). A recent study (C Jencks et al: "Do rising top incomes lift all boats?") shows that, in the 20th century, there was no relationship between changes in inequality and economic growth in the US and 12 developed countries. But between 1960 and 2000, rising inequality was associated with higher growth.

What of the claim that rising inequality inhibits social mobility? Alan Krueger, chairman of President Obama's Council of Economic Advisors, in a recent speech on inequality drew the "Great Gatsby Curve", which plotted the levels of inequality and a measure of inter-generational mobility (the relationship between the incomes of fathers and their sons) for several developed countries, showing that higher inequality corresponded with lower inter-generational mobility. But this, like the cross-country econometric studies of inequality and growth, is plagued by the problem of "identification" to establish causality. Most devastatingly, when James Manzi of the Manhattan Institute substituted population/exports as a percentage of GDP/religious fractionalisation of each country for the inequality variable in the Krueger regression, the Great Gatsby Curve was even stronger (James Manzi: "The Great Gatsby, Moby Dick and omitted variable bias", February 7, 2012, www.nationalreview.com).

While these purported economic effects of rising inequality may be unsubstantiated, the rise of what some have termed a class society in the US would mitigate against one of the basic features of the common classless culture that Americans have built and celebrated over the years. An important book by Charles Murray, Coming Apart: the State of White America, 1960-2010, delineates and outlines the causes of this changed cultural landscape. This is the subject of my next column.