Here’s a big surprise. It turns out that if you cut taxes while also spending more money, budget deficits get bigger.

Despite the banal common sense of this proposition, the Trump administration has tried to pretend that it was different for them: They could make everyone happy by cutting taxes but not spending. The tax cuts would generate so much new economic growth that they would not only pay for themselves but also pay for massive increases in government spending.

Now, however, in its most recent mid‐​year budget review, the White House’s Office of Management and Budget (OMB) admits that this fairy tale hasn’t come true.

According to OMB, the federal budget deficit will reach $1 trillion in 2019, roughly $101 billion more than previously projected. That also means deficits will top $1 trillion a year earlier than under previous projections from the Congressional Budget Office. And the tide of red ink is only expected to grow taller in the future.

While imperfect, Trump’s tax cuts did accomplish some important things, including helping to make American businesses more competitive worldwide, slowing corporate inversions, and stimulating innovation. Moreover, allowing people and businesses to keep more of their own money should generally be seen as a positive thing.

When it comes to big spending and fiscal irresponsibility, he’s as conventional as they come.

However, those who argued that the tax cuts would “pay for themselves” always misunderstood the Laffer Curve. Tax cuts — at least some kinds of supply-side tax cuts — can generate additional economic growth, which means that those cuts seldom result in a dollar-for-dollar revenue loss. But that doesn’t mean they are a completely free lunch.

Given stagnant labor-force-participation rates and slowing population growth (caused in part by the president’s anti-immigration-policies), the Trump administration was essentially assuming that the US economy would experience a productivity boom larger than any in post-war history. It hasn’t happened. The Trump tax cuts are estimated to have reduced federal revenues by roughly $230 billion already, and by $2.3 trillion over ten years.

That would be perfectly fine if we simultaneously reduced federal spending. As Milton Friedman pointed out, the true cost of government is not found in taxes or debt, but in spending. Taxes and borrowing are just alternative ways of paying the cost. A smaller, less costly, less intrusive government would be better for all of us, would generate more growth, and would require fewer taxes to pay for it.

Yet Donald Trump is on track to be an even bigger spender than Obama. Federal spending has increased by 7.5 percent, or almost $300 billion, over President Trump’s first couple of years in office. Conservatives might applaud the over 8 percent increase in defense spending, although that increase seems unrelated to any strategic plan or external threat. But what should Republicans make of the 7 percent increase in domestic spending?

One expects this sort of fiscal insanity from congressional Democrats. The party that already favored “health care for all,” “college for all,” and “jobs for all” recently began a push for “housing for all.” As a down payment, Senator Kamala Harris (an expected 2020 presidential candidate) is calling for billions in federal rent subsidies that would primarily benefit Californians facing the consequences of their own irresponsible zoning regulations. Their 2020 slogan might as well be “everything for everyone.” 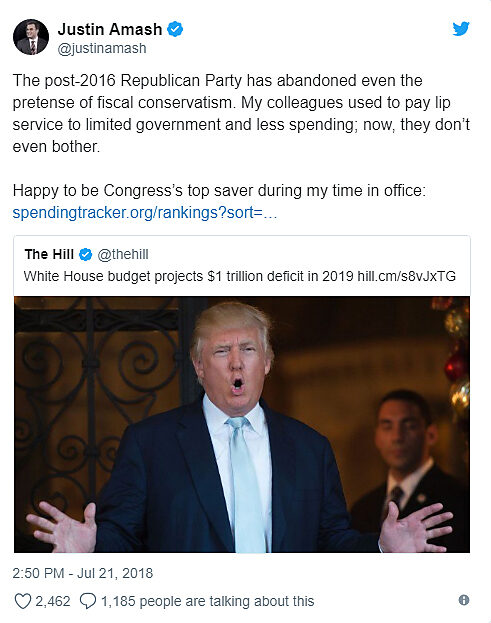 And the administration continues to spend money with reckless abandon. Recently, for example, the president suggested a fund to pay farmers for the losses caused by the president's trade policies. Entitlement reform remains entirely off the table.

President Trump's supporters like to point out that he does things differently than previous presidents. No doubt. Unfortunately, however, when it comes to big spending and fiscal irresponsibility, President Trump is as conventional as they come.