The U.S. trade deficit for 2017 ballooned to $566 billion, the largest since 2008. This, no doubt, gave President Trump a headache. After all, one of his ill‐​advised campaign promises was to rebalance the U.S. trade account with the rest of the world. The President, like many businessmen, understands little of international economics. Indeed, they usually wrap their heads around what economists term “closed economies,” rather than “open economies.” In consequence, they get virtually everything about economics wrong, because economies are “open,” not “closed.”

Congress’s fiscal folly will explode the trade deficit—precisely the opposite of what the President has promised.

Contrary to the claims of Wilbur Ross, the U.S. Secretary of Commerce, our deficit will not be reduced by enforcing trade rules, renegotiating existing trade pacts, or forming new ones. While these policies might shuffle the deck and alter the bilateral trade balances the U.S. has with other countries, they will not alter the overall U.S. trade balance. Indeed, policies aimed at eliminating so-called “unfair trade practices”—while attractive to many businessmen, trade unionists, most progressive activists, and all who harbor mercantilist sentiments—are wrongheaded and futile.

Why? The simple analytics of the trade deficit can be used to prove the utter futility of the Trump administration’s trade policies. Their policies will not affect America’s aggregate trade deficit.

In economics, identities play an important role. These identities are obtained by equating two different breakdowns of a single aggregate. Identities are interesting, and usually important, by definition. In national income accounting, the following identity can be derived. It is the key to understanding the trade deficit:

The table below shows that the data support the important trade identity. This table is unique because the state and local governments’ fiscal balances have been included in the “government saving minus investment” column. The cumulative trade deficit the U.S. has racked up since 1975 is about $11.154 trillion, and the total investment minus savings deficit is about $10.435 trillion, confirming the power of the identity. 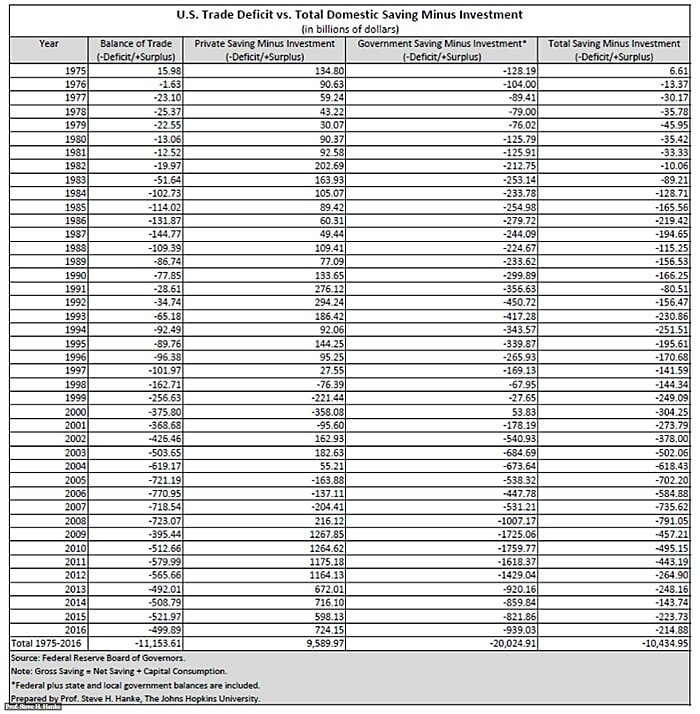 President Trump has a little problem, one generated by his administration’s wrongheaded view on international economics. The President has stated that he will sign Congress's budget bill. But, little does he know, Congress's fiscal folly will explode the trade deficit—precisely the opposite of what the President has promised.