Money matters — it’s one of Milton Friedman’s maxims that I repeat often in my columns. Since the Northern Rock bank run of 2007 — the “opening shot” of the financial crisis — the money supply, broadly measured, in the United States, Great Britain, and the Eurozone has taken a beating.

Recently, in the United States, money supply growth has started to rebound somewhat. This is a positive sign, because the quantity of money and nominal gross domestic product (GDP), as well as related measures of aggregate demand, are all closely related. Indeed, if broad money growth is robust, the nominal GDP, which is composed of real and inflation components, will be robust and vice versa.

When it comes to measuring the money supply, we must heed the words of Sir John Hicks, a Nobelist and high priest of economic theory: There is nothing more important than a balance sheet.

One of these counterparts is known as credit, and it includes various financial instruments, such as private loans, mortgages, etc. Money and credit are often confused as synonyms, but they are not the same thing — credit is a counterpart to money. Any economist worth his salt should have the money supply on his dashboard. But, it is also important to look at what the financial sector is doing with these deposits — are they lending this money back out to the economy, and if so, to whom? There is one very important counterpart of the money supply that is particularly worth looking at — loans to private individuals and businesses, known as “private credit.”

In the U.S., movements in the money supply (Divisia M4) and private credit tend to move in the same direction. Since 2013, the year-over-year growth rate of the money supply, broadly measured, has started to increase (see the accompanying chart). 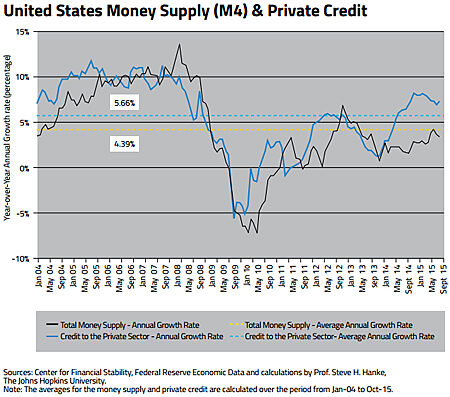 Indeed, the Divisia M4 annual growth rate almost reached its trend rate of growth (4.39 percent) in August of this year. But, it has subsequently slipped back to a 3.4 percent annual rate.

During this period of modest acceleration in Divisia M4 growth, the growth rate in private credit has strongly accelerated and is now comfortably above its trend rate of growth (6.58 percent). So, money and credit growth look rather promising. After all, they are precursors of nominal aggregate demand growth.

This linkage between the growth rate in broad money (Divisia M4) and nominal aggregate demand (measured by the proxy final sales to domestic purchasers) can be observed in the accompanying chart. The interesting aspect of the chart is that it confirms that the U.S. is still in a growth recession — the U.S. is growing, but growing at below its trend rate when measured by final sales to domestic purchasers (2.62 percent versus 4.85 percent). This has resulted, in part, because broad money growth has been anemic, even though it has picked up the pace recently. 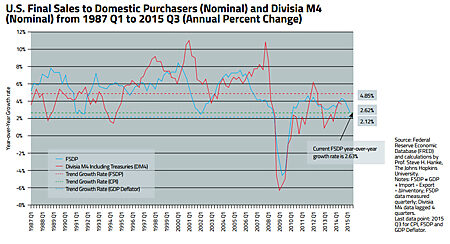 For many, the idea of anemic money growth sounds strange. After all, the Fed turned on the money pumps in the wake of the 2008 crisis (read: engaged in quantitative easing). But, the Fed only directly controls what is known as state money, also known as the monetary base, which includes currency in circulation and bank reserves with the Fed. The vast majority of the money supply, properly measured, using a broad metric, is what is known as bank money. This is money produced by the private banking sector via deposit creation, and it includes liquid, money-like assets such as demand deposit and savings deposits.

The Fed has indeed been quite loose when it comes to state money, with the state money portion of the total money supply, measured by M4, increasing from 5 percent of the total before the crisis, to 21 percent today. But where does the lion’s share of broad money (the other 79 percent of the money supply) come from, if not from the central bank? It comes from commercial banks. And that is where financial regulation comes into the picture.

For some time, I have warned that higher bank capital requirements, when imposed in the middle of an economic slump, are wrong-headed (read: pro-cyclical) because they put a squeeze on the money supply and stifle economic growth. Thus far, the result of efforts to impose these capital requirements has been financial repression — a credit crunch. This has proven to be a deadly cocktail to ingest in the middle of a slump.

In the aftermath of the financial crisis, politicians, regulators, and central bankers around the world have pointed their accusatory fingers at commercial bankers. They assert that the keys to preventing future crises are tougher regulations and more aggressive supervision, centered around higher capital requirements for banks.

This would be fine if higher capital requirements were being imposed during an economic boom, because capital hikes cause money supply growth to slow, which tends to cool down the economy. But, when capital hikes are imposed during a slump or a growth recession, they become pro-cyclical and actually make things worse. Indeed, the imposition of higher capital requirements in the wake of the financial crisis has caused banks to shrink their loan books and dramatically increase their cash and government securities positions.
For a bank, its assets (cash, loans and securities) must equal its liabilities (capital, bonds and liabilities which the bank owes to its shareholders and customers). In most countries, the bulk of a bank’s liabilities (roughly 90 percent) are deposits. Since deposits can be used to make payments, they are “money.” Accordingly, most bank liabilities are money.

The United States has employed a loose state money/tight bank money monetary policy mix. Yes, for all the talk of quantitative easing and Fed’s loose monetary policy, the inconvenient truth is that the overall money supply in the U.S., broadly measured, is still, on balance, quite tight — thanks in large part to ill-timed bank capital hikes.

But, this isn’t the bank regulators last act. In mid-November, the Basel Committee on Bank Supervision, which sets worldwide standards, surprised the banking community by indicating that banks would have to dramatically increase the amount of capital they hold as a buffer against adverse market moves. At about the same time, the Fed rolled out new regulations to bolster the large banks’ “total loss-absorbing capacity” (read: increase their capital-asset ratios). All this increased capital is advertised as something that is needed to make banks safer and protect taxpayers from footing the bill for bank bailouts. This could well prove to be false advertising, because the increased mandates for more bank capital will slow the growth of money and credit, which will also slow nominal GDP growth — relative to where it would have been.