Bankers — facing a barrage of new capital requirements, regulations and investigations — must feel as if they are targets of a witch hunt. Well, if the truth be told, they are. Indeed, it’s gotten so bad that the Dutch authorities, who were clueless before the crisis, have put the sinners (read: bankers) on public display and forced them to repeat the following: “I swear that I will endeavor to maintain and promote confidence in the financial sector.… so help me God.” So, there you have it, so help me God.

The world's politicians and central bankers — the ones who enabled the excesses that led to the financial crisis of 2009 — have to blame someone else for their misdeeds. And what is a more inviting target than hapless bankers?

Beating up on bankers (and banks) — the ones who produce most of the world's money — creates a problem: it constrains the growth of money broadly defined. In consequence, Europe is in a slump, and so is Japan. As for the U.S., it's stuck in a growth recession with nominal aggregate demand growing much more slowly than the trend rate since 1987. Even China is sagging a bit. This is all because of relatively slow money growth. Let's review the terrain and my themes of the past few years—themes that continue to be supported by the unfolding evidence.

First, take a look at the United States. The Center for Financial Stability, under the direction of Prof. William A. Barnett, publishes Divisia monetary data. These are now available via Bloomberg and provide the most accurate picture of the U.S. money supply that is available.

Even though the Fed has been pumping out State Money at a super-high rate since the crisis of 2009, it hasn't been enough to offset the anemic supply of money produced by banks — Bank Money. Even after six years of pumping, State Money still only accounts for 21 percent of the total money supply broadly measured. In consequence, the Divisia M4 money supply measure is growing on a year-over-year basis at a very low rate of only 1.7 percent. And that's why nominal U.S. aggregate demand measured by final sales to domestic purchasers is still growing at below its trend rate of 5% (see the accompanying chart). 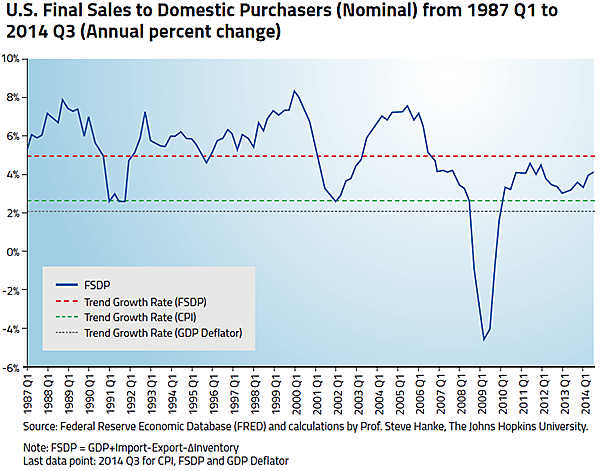 Moving across the pond to Europe, the picture starts to turn even uglier–thanks to Bank Money austerity, not fiscal austerity. Here again, the cause is the regulatory witch hunt aimed at banks and bankers by the political class and their loyal troops — the central bankers.

When it comes to measuring the money supply, we must heed the words of Sir John Hicks, a Nobelist and high priest of economic theory: "There is nothing more important than a balance sheet." Indeed, these sentiments were echoed by my Parisian friend, former Governor of the Banque de France Jacques de Larosiere, in his 17 April 2013 lecture at Science Po.

One of these counterparts is known as credit, and it includes various financial instruments, such as private loans, mortgages, etc. Money and credit are often confused as synonyms, but they are not the same thing — credit is a counterpart to money.

Any economist worth his salt should have the money supply on his dashboard. But, it is also important to look at what the financial sector is doing with these deposits — are they lending this money back out to the economy, and if so, to whom? There is one very important counterpart of the money supply that is particularly worth looking at — loans to private individuals and businesses, known as "private credit."

The money supply in Europe is growing, but credit has been contracting since late 2012 (see the accompanying chart). Why? To answer this question it is necessary to determine what driving money supply growth in the Eurozone is. A large chunk of the contribution to the growth in M3 has come from an increase in bank lending to governments. 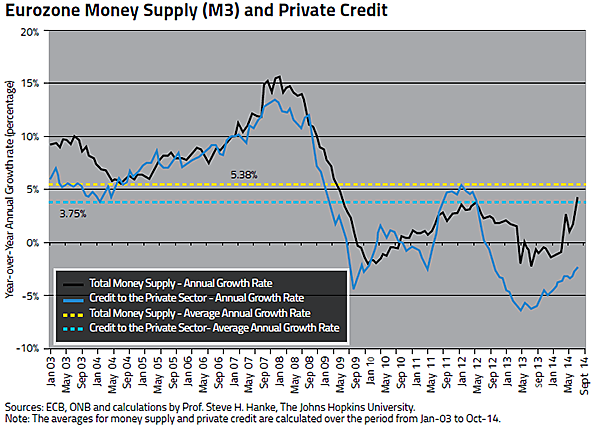 Another large chunk of this growth in M3 has come from a decrease in banks' long-term liabilities. To understand how this would increase the money supply, consider the following example: If I own a long-term bank bond, and the bank then retires that bond, I will take the money I receive as a result of this transaction and put it into my bank account. Hence, the money supply (deposits) increases.

In short, government borrowing and the restructuring of the liability side of bank balance sheets is pumping up the Eurozone money supply, while private credit remains in the doldrums. And that's why it's not surprising that Europe is on the verge of a recession.

To understand just how dire things in Europe are, take a look at the accompanying chart for Germany's money and credit. In the absence of developed capital markets, small and medium sized businesses depend on bank credit. And without bank credit, these businesses, which account for the lion's share of Europe's job growth, can't grow and often can't survive. 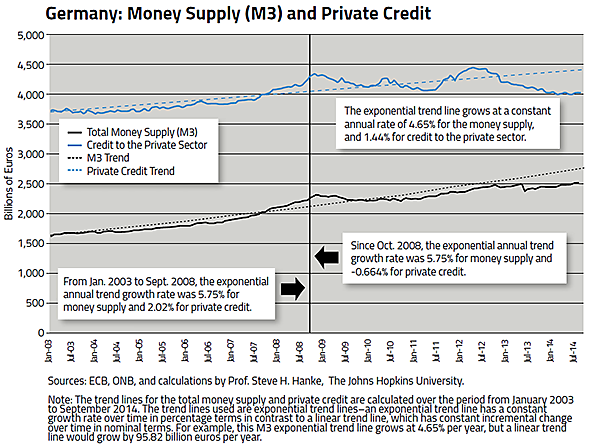 China turns out to be one of the few countries in which the authorities understand money, and one that has refused to jump on the capital punishment bandwagon. Indeed, China saved themselves from a slump in 2009 because it massively increased the supply of money and credit (see the accompanying chart), rather than embrace Keynesian fiscal nostrums. That said, China has allowed its money and credit growth to drift below trend. So, it's not surprising that a recent research paper by Ma Jun of the People's Bank of China predicts a slowdown in China's GDP growth — from 7.4 percent in 2014 to 7.1 percent in 2015. The money and credit growth numbers suggest that such a slowdown might just be in the cards.

Money and credit matter. It's remarkable that the most influential press in the world (read: The New York Times and the Financial Times) love to join the witch hunt and repeat fiscal nostrums, but rarely mention what matters. 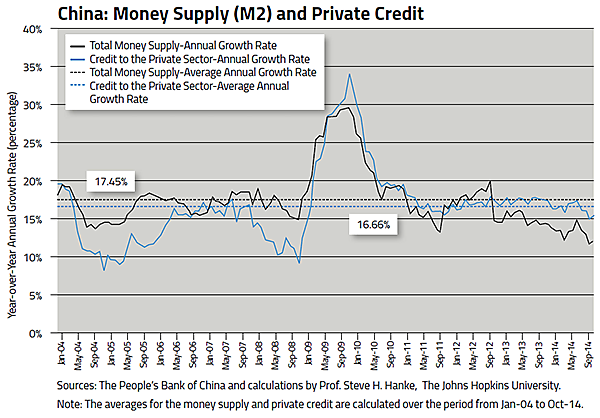