Skip to main content
Live Now
This article appeared in the Forbes​.com on January 31, 2014.
TOP

Argentina’s luck is finally starting to run out. It devalued its currency by 15 percent last week, marking the beginning of a possible economic crisis of the kind Argentina has become known for. Argentina’s problem is that it has followed the logic of populism for more than a decade and President Cristina Kirchner is showing no interest in changing course.

In the 1990s Argentina combined far-reaching but sometimes flawed market-reforms with irresponsible fiscal policies, culminating in its 2002 default on $81 billion in debt—the largest sovereign default in history. The country delinked its currency from the dollar, experienced a severe economic crisis, and initiated its current period of populist politics.

But the government's appetite has consistently grown faster, and, with little ability to borrow abroad, it has turned to other sources of finance. In 2008, Kirchner nationalized private pension funds worth some $30 billion, and has since nationalized an airline and a major oil company. As it drew down reserves, the government turned to printing money to finance itself, falsifying the inflation rate it says is about 11 percent, but which independent analysts put at about 28 percent. Economist Steve Hanke estimates it is much higher at 74 percent

The imposition of price controls on items such as food and electricity and controls on capital have only produced scarcities and the emergence of a black market exchange rate that values the peso some 50 percent under the official rate. In other words, people are putting far less worth in the currency than the government would like. The partial devaluation of the peso last week was an effort by the government to close that gap, and discourage speculating against the currency. But so far that hasn't happened. The black market rate of the peso fell along with the official rate. It looks like the government's move will undermine confidence in the Argentine economy even further.

We can expect worse not only because of the arbitrary way Buenos Aires makes policy and thus spreads uncertainty; a more fundamental reason is that the Kirchner regime has shown no interest in taming inflation or the high level of spending it finances. Indeed, as the graph below from Argentine economist Luis Secco shows, the size of government has exploded in the last decade. Secco calculates that public spending grew from 22 percent of GDP in 2002 to an estimated 44 percent in 2013. 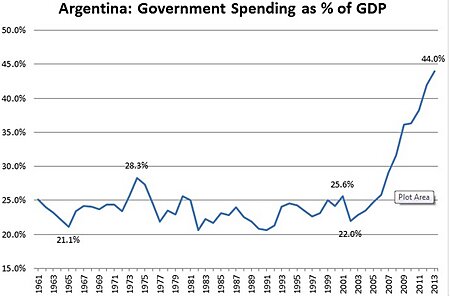 It isn't the first time that Argentina has lived beyond its means. The last time it did so, public spending grew 97 percent from 1991 to 2001, while the economy grew by only 57 percent. Argentines remember how that episode ended. This time around Argentina has no recourse to international credit. As long as Buenos Aires insists on an unsustainable size of government, inflation and capital flight will continue, future devaluations will occur, and Argentina's downward spiral will accelerate.

Vice President for International Studies and Director, Center for Global Liberty and Prosperity