By the time its 100th birthday rolled around, Argentina had experienced only three major economic crises. Alas, the next 102 years have been much more eventful, with eight currency crises, not counting 2018.

A noteworthy date is 1935. That's when the Central Bank of Argentina (BCRA) was established, and with that, serial monetary mismanagement ensued. The chart below tells the BCRA story. Before the BCRA, Argentina (the peso) held its own against the United States (the dollar). Indeed, from 1875 until 1935, the ratio of U.S. GDP per capita to that in Argentina averaged 1.28. So, on average, GDP per capita in the U.S. was 28% higher than it was in Argentina. In 1881, the U.S. relative position reached its maximum when the ratio was 1.75, and it reached a minimum in 1896, when the ratio was 0.85. That means that in 1896, Argentina's GDP per capita was actually higher than that in the U.S.

After the BCRA was founded, the relatively stable relationship between per capita income in the U.S. and Argentina broke down, with the dollar-based U.S. economy growing much more rapidly on a per capita basis than the peso-based Argentine economy.  In 1935, GDP per capita in the U.S. was 28% higher than that in Argentina. By 2016, this rate ballooned to a whopping 181%.

As we move from the BCRA's founding in 1935 towards the present, commentary on the decade of the 1990s is required. That decade began with an inflationary bang. In 1989, the rate of inflation was 3,079%. 1989 also saw Carlos Menem take up residence in the Casa Rosada as Argentina's new President. Menem's manifesto was one of economic reform and liberalization, along the lines of the Chicago Boy's reforms of the 1970s and 80s in Chile.

When Mrs. Hanke and I first met Menem, shortly after he became President on July 8th, he expressed a clear vision of what he wanted to accomplish in the economic sphere. But, he was frustrated. His reforms were going nowhere.

I indicated that, while his campaigns to deregulate, privatize and slash export taxes were fine, they would go nowhere until he killed inflation. Slaying inflation was necessary for Menem, so that he could establish credibility and gain the public’s confidence. Menem then asked, how would I stop inflation? I responded that a currency board was just what the doctor ordered. With that, the President said he was interested, and suggested that I write up a proposal.

I immediately began to work on a currency board blueprint with Kurt Schuler. While drafting the blueprint, I worked closely with Congressman José María Ibarbia and his colleagues (the so-called Alsogaray faction) in the Argentine Congress. In early 1991, the Hanke-Schuler currency board blueprint was published as a book by the Fundacion Republica in Buenos Aires: Banco Central o Caja de Conversion. Schuler and I were pleased to have José María Ibarbia write a preface for our book, and to have the Alsogaray faction on board. With that, Menem knew he would have support for a “currency board” in the Congress.

Like currency board arrangements, the Convertibility System maintained a fixed exchange rate between the peso and its anchor currency, the U.S. dollar. That nominal anchor crushed hyperinflation and prevented inflation from rearing its ugly head. Indeed, the consumer price index at the end of 2001 was about where it was in 1994. By smashing inflation, Convertibility gave Menem the credibility he desperately needed to carry out his reforms.

The Convertibility System was not trouble-free, however. Its deviations from currency board orthodoxy allowed it to behave more like a central bank than a true currency board. These deviations were significant, and prompted me to pen an op-ed “Argentina Should Abolish Its Central Bank.” It was published in the Wall Street Journal on October 25, 1991. As I wrote then: “To lock in the Menem-Cavallo achievements and permanently remove skepticism from the Argentine monetary scene, Argentina should abolish its Central Bank and replace it with a currency board.”

Alas, the Convertibility System, after killing a hyperinflation and ushering in a decade-long economic boom, met its Waterloo in 2001. Just as I had anticipated in my 1991 Wall Street Journal piece, the BCRA used Convertibility’s deviations from currency board orthodoxy to engage in discretionary monetary policies. In the end, the BCRA did just what it had always done. It made a mess out of monetary policy and created a currency crisis.

The BCRA’s most recent monetary mishap is depicted by the plunge of the peso (see the chart below). The poor peso has lost 34.2% against the greenback since January 1st. That rout forced the Macri government to go hat-in-hand to the International Monetary Fund (IMF) for a bailout. Given the Argentine public’s distrust, if not despise, of the IMF, President Macri’s move was clearly a desperate one. If the peso’s travails weren’t bad enough, now the Argentine public is saddled with the IMF, yet again. 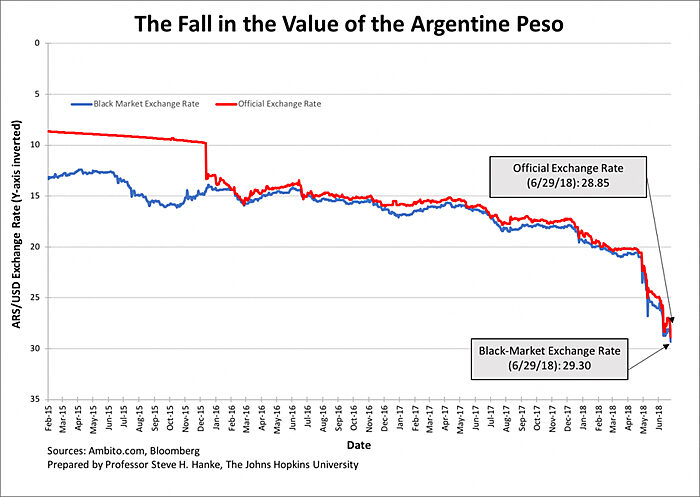 Why the peso rout? To answer that question, just take a look at the chart below. Note the surge in the growth rate of Argentina's broad money since late 2017 and the explosion in private credit growth. These surging growth rates are not consistent with the objective of hitting Argentina's inflation target of 10-15%/yr. Nor are they consistent with a stable peso. Markets can figure out those inconsistences faster than you can snap your fingers. And they did. 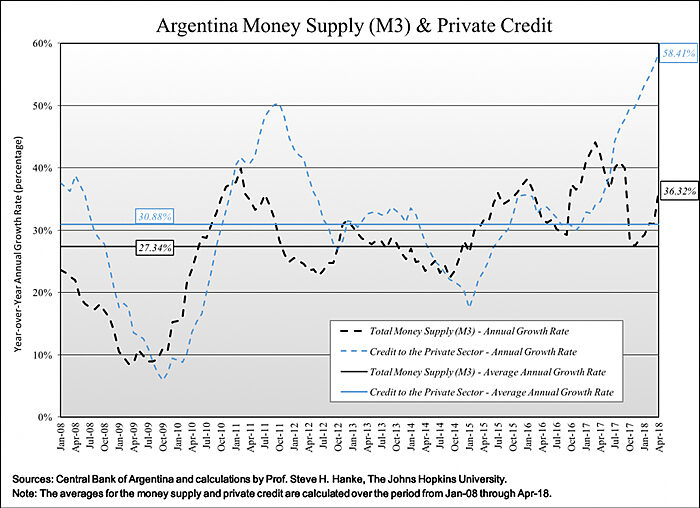 Another aspect of the BCRA's monetary mischief is not so obvious, but it's every bit as real. The BCRA has been surreptitiously financing the government's deficit spending. It does this through the sterilization of increases in the net foreign asset component of Argentina's monetary base. This is done via the sale of bonds issued by the BCRA (LEBACS). The sterilization (and financing of the government's deficit) has been on a massive scale. In the January 2017—May 2018 period, the BCRA sterilized 50% of the total increase in the foreign asset component of the monetary base (see chart below). In consequence, the BCRA has been the largest source of finance for Argentina's sizable primary fiscal deficit. These monetary-fiscal shenanigans are a formula for a currency disaster. 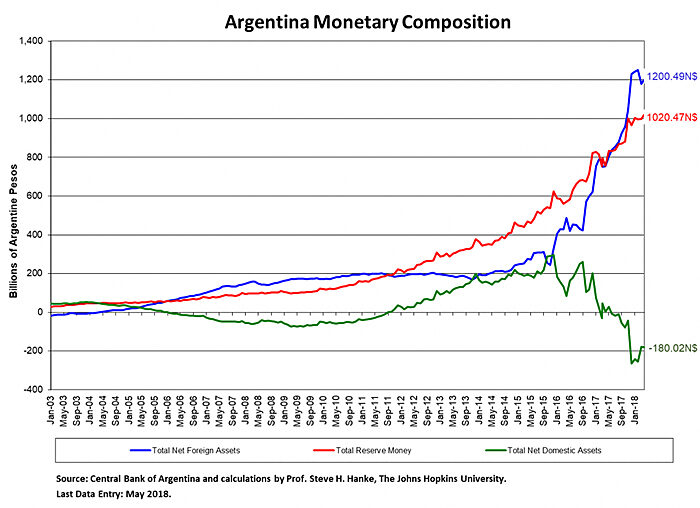 To end Argentina’s never-ending monetary nightmare, the BCRA, along with the peso, should be mothballed and put in a museum. The peso should be replaced with the U.S. dollar. Argentina should do officially what all Argentines do in times of trouble: dollarize. It’s time for President Macri to face reality. He must drive a stake in the heart of Gradualism. Dollarization would do just that. And with that, confidence would be established; and as John Maynard Keynes put it: “The state of confidence, as they term it, is a matter to which practical men pay the closest and most anxious attention.”