Today the New York Times ran an op‐​ed by Clyde Prestowitz, one of the last generation’s most vocal trade policy Cassandras, who argues that the Trans‐​Pacific Partnership has no security or economic value to the United States, and would only exacerbate our trade deficits with the countries involved. Despite how things turned out, the same guy who warned in the early 1990s that Americans had best ingratiate themselves to their imminent Japanese overlords by learning to say “I surrender” in their native tongue doesn’t appear the slightest bit abashed about peddling more American defeatism to a new generation.

Most of what Prestowitz has to say in his op‐​ed is anachronistic or plain wrong, but let’s focus on his characterization of the U.S. trade deficit as a symptom of economic decline. There has been no shortage of hand‐​wringing about the U.S. trade deficit over the years. Since the 1980s, scolds have been warning about the unsustainability of running trade deficits and the perils that would follow. Today, the heirs of that perspective consider trade balance or a trade surplus to be the objective of trade policy — and trade deficits proof that the United States is losing at trade.

This misguided belief that the trade account is a scoreboard measuring the success or failure of trade policy explains much of the public’s skepticism about trade and trade agreements, lends plausibility to Trumptastic claims that the United States is routinely outsmarted by shrewder foreign trade negotiators, and provides cover for the same, recycled protectionist arguments that have persisted without merit for centuries.

But what has long been absent is a single convincing, factual argument that the U.S. trade deficit is a problem in need of a solution. Sure, many articles jump to that conclusion, relying upon or perpetuating misunderstanding about what exactly is measured by the trade account and the signals it sends to policymakers, but never one that is coherent from premise to conclusion, explaining cogently and with empirical support why the U.S. trade deficit is a problem, or why achieving trade balance or a surplus should be the aim of policy. Why hasn’t such a case been made?

Rather than a reflection of weakness or stupidity or profligacy or foreign malfeasance, the annual trade deficit is a sign of U.S. economic hegemony — a global endorsement of the relative strength of the U.S. economy and its direction. The United States has run annual trade deficits for 41 straight years. (Yet we’re still alive — even thriving!) The trade account turned to deficit in 1975, just four years after President Nixon upended the gold standard and caused the world’s investors to seek out safe havens. Because of its relative stability and the relatively low-risk associated with U.S. economic policies, the dollar quickly became the world’s predominant reserve currency. Demand for dollar-denominated assets grew swiftly, and with that inflow of investment came greater U.S. demand, for both domestic and imported goods and services.

During those 41 straight years of trade deficits, the size of the U.S. economy tripled in real terms, real manufacturing value added quadrupled, and the number of jobs in the economy almost doubled, outpacing growth in the civilian workforce. Perhaps these trends would have been more favorable had the United States run 41 straight years of trade surpluses, but that is highly doubtful, for the reasons below.

The scolds tell us that the trade deficit reflects economic “leakage.” When Americans purchase more goods and services from foreigners than foreigners purchase from Americans — the argument goes — U.S. factories, farmers, and service providers are deprived of potential sales, suppressing domestic output and employment. But that argument relies on the assumption that the dollars sent to foreigners to purchase imports do not make their way back into the U.S. economy — an assumption that is wrong. It may be true that when Americans — acting in their own self interest to maximize the value of their dollars — purchase from foreigners the things that could be purchased from domestic producers, there is some degree of temporary leakage. But remember that much of what Americans purchase from foreigners is not produced in the United States and about half the value of all U.S. imports consists of intermediate goods — the purchases of U.S. producers, who rely on those inputs to manufacture their own output. Moreover, when Americans choose to purchase the import over the domestic product, they are consciously maximizing their own value. If they get imports for lower prices, they have more resources to spend elsewhere in the economy, or to save (which becomes pooled with other savings and lent to entrepreneurs and business owners). Given these facts alone, it’s pretty hard to make the case that imports constitute leakage.

But here’s the most important part. In all cases, the dollars that go abroad to purchase foreign goods and services (imports) and foreign assets (outward investment) are matched almost perfectly by dollars coming back to the United States to purchase U.S. goods and services (exports) and U.S. assets (inward investment). Any trade deficit (net outflow of dollars) is matched by an investment surplus (net inflow of dollars). That investment inflow undergirds U.S. investment, production, and job creation.

It turns out that any temporary “leakage” associated with the trade deficit is replenished by the capital surplus. That capital investment takes the form of foreign purchases of U.S. equities and direct investment in property, plant, and equipment. It also includes purchases of corporate and government debt, the latter of which also undergirds U.S. economic activity, but demonstrably less efficiently than investment in the private sector.

This inward investment produces real wealth and other benefits for American businesses, workers, and consumers. When dollars leave the economy to purchase imports and come back as foreign equity investment in U.S. businesses or foreign direct investment in factories, research centers, hotels, and shopping malls, the U.S. economy enjoys benefits that would never have accrued had those dollars been prevented from going abroad in the first place. 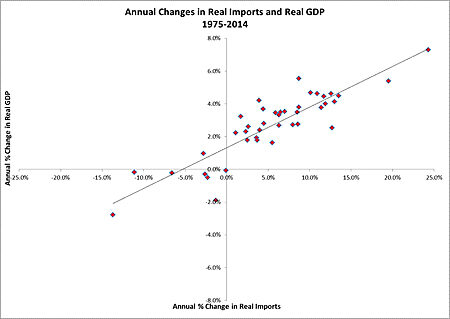 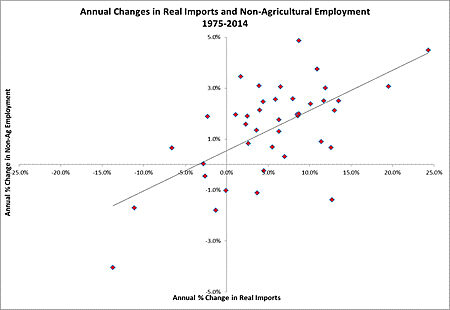 If the trade deficit reduces economic activity and destroys jobs, why are there positive relationships between these variables? In fact, a reasonable case can be made that the trade deficit is actually GOOD for the United States because the combination of the contraction of less efficient domestic production resulting from that temporary leakage and the expansion of economic activity associated with the inflow of FDI yields net increases in U.S. value-added (and produces other benefits). In other words, the foreign investors that establish or expand operations in the United States tend to be cream-of-the-crop foreign companies that have succeeded in their own markets and have gone global, disseminating industry best practices and new ideas, and they perform better than the U.S. private-sector average.

This paper presents a comparison of the performance of insourcing companies to the U.S. private sector average over 10 years and across 20 different metrics (including value added, capital expenditures, R&D expenditures, compensation, employee benefits, returns on assets, intermediate goods purchases, exports, and taxes paid) and found that insourcing companies performed better than the U.S. private-sector average on 17 of those 20 metrics, thereby raising average U.S. economic performance.

Another oft-repeated fallacy is that the accumulated trade deficit is a debt that our children and grandchildren will have to repay our foreign creditors. Let’s consider that. The U.S. trade deficit is financed by inflows of foreign capital used to purchase U.S. assets. Most of the assets purchased are equities and physical assets (direct investment). Some of the assets are corporate debt and government debt.

As of the end of 2014, Americans held a total of $24.6 trillion of foreign assets. Foreigners held a total of $31.6 trillion of U.S. assets. Of that $31.6 trillion foreign asset portfolio, treasury bills and bonds accounted for about $6 trillion — just under 20 percent of the total. It is only this portion — government debt owned by foreigners — that the American public (of this and future generations) is on the hook to pay back. Corporate debt has to be repaid, but only by the shareholders and employees of the companies issuing the debt — not by you or me or our children, generally. Equity purchases don’t have to be paid back at all — they’re not loans! When European, Japanese, Korean, Chinese or any foreign investors purchase U.S. companies or make “greenfield” investments to build new production or research facilities or hotels or shopping centers, there is no debt to be repaid.

How are our children and grandchildren on the hook to pay back accumulated trade deficits when most of those deficits are not loans, but equity? Selling equity or property or even entire U.S. companies to foreigners does not constitute debt and it is not akin to subsidizing our consumption by draining down our assets, as some suggest. It's not a reverse mortgage.

The only portion of the trade deficit that the American public will have to pay back is that which finances the U.S. government debt, which accounts for about one-fifth the value of all foreign investment and is not a failing of trade or investment policy, but a consequence of excessive government spending. It's worth noting that those who wish to respond to the trade deficit with restrictions on trade tend also to be the same people who advocate for more government spending, which is the real problem.

So, with that on the table, is it too much to ask those who believe the trade deficit is a problem to finally offer a compelling, fact-driven argument? We've been waiting over 40 years.