What is the political economy foundation for 21st century trade negotiations? Despite the fact that international trade has undergone substantial transformation during the past 30 years, surprisingly few have posed this fundamental question recently. The question becomes particularly relevant as we enter the crucial stages of the negotiations for a Transatlantic Trade and Investment Partnership (TTIP).

The view that private sector lobbying influences trade policy has long been central to the theoretical groundwork explaining both protectionism and trade negotiations. More specifically, the argument often runs as follows: whereas the gains from trade liberalization are shared broadly, the costs are concentrated among a few import-competing producers.1 In the absence of trade negotiations, a concentrated and better-organized import-competing sector will therefore triumph over consumer interests. By introducing reciprocal trade negotiations, export interests are mobilized in a way that allows mutually beneficial trade liberalization to take place.

During the latter part of the 20th century, this political-economy rationale for trade negotiations was largely validated. Since then, however, success with trade negotiations has been rare and evidence is mounting that private sector pressure has eroded (Mattoo and Subramanian, 2005).

As trade becomes increasingly fragmented through global value chains (GVCs), a key question is whether reciprocity can remain an effective instrument of trade liberalization. Analytically, the GVC effect on trade negotiations can be divided into two categories:

Another potential effect from interest fragmentation associated with GVCs is that both export interests and import-competing interests become weaker in relation to other trade-policy stakeholders, in particular NGOs.

Finally, the role of multinational enterprises (MNEs) is of particular interest in this context. MNEs that outsource their production can be expected to shift their focus from market access issues to broader strategic issues related to supply chain control, capital management and intellectual property rights. This suggests that market access issues receive a lower priority for MNEs. By contrast, small and medium-size enterprises that depend on arm's length trade have a greater interest in market access but typically wield less influence to achieve it.

Indirect GVC Effects Through Changes in the Negotiating Agenda

Some trade analysts argue that GVCs have changed the trade-negotiation agenda from shallow to deep integration. The mechanism for this is described as an evolution in the main role of the trading system from selling to producing (Baldwin, 2014). This shifts private sector interests from market access issues to deep integration issues, such as investment, services and various regulatory measures. As stakeholder demand changes, the trade-policy agenda shifts with it. The result is the deep integration agenda of 21st century trade negotiations, such as TTIP. In this sense, GVCs have already had an indirect impact on trade negotiations.

The next critical question becomes: How effective is reciprocity as an engine of trade negotiation for deep integration issues? While many trade agreements contain deep integration provisions, this does not necessarily mean that they are effective in the sense that the disciplines reduce trade barriers in previously protected markets.

There are a few examples of deep integration issues being negotiated in a more comprehensive fashion between equal partners, such as the Eurpean Union and the United States. One such example, however, is service negotiations under the WTO. So far, WTO services negotiations have produced little new trade liberalization. The best offers in the Doha Development Agenda (DDA) are on average more than twice as restrictive as actual policy (Hoekman and Mattoo, 2011). The OECD's newly launched services restrictiveness index (STRI) yields a similar result (see figure 1). 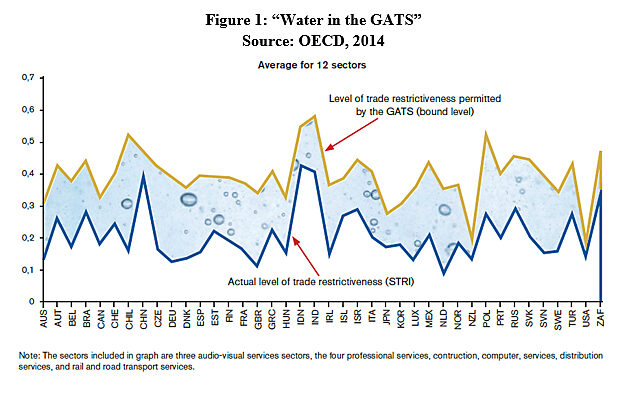 One explanation for this emphasizes three groups that resist service liberalization: firms with market power (at home or abroad), consumer groups, and regulators themselves.

What Lessons Can Be Drawn from Negotiations on Trade in Services?

An increase in the fragmentation of trade and production could lead to a corresponding fragmentation of interests. This "fragmentation effect" is likely to influence both export interests and import-competing interests. At the same time, the growth of trade in intermediate goods and services means that open-market stakeholders could receive a broader base. This "broadened base effect" unambiguously reduces domestic demand for protection. Altogether it is therefore reasonable to expect that negotiations based on reciprocitycould remain a successful mechanism for market access liberalization in the future.

The analysis in this paper furthermore suggests that it makes sense to separate market access negotiations from behind-the-border negotiations. To a certain extent this message challenges the idea that a supply chain perspective should guide trade negotiations (Hoekman and Jackson 2013; Kommerskollegium, 2013). While a supply-chain perspective makes sense from an economic efficiency point of view, it is also crucial to recognize the political-economy logic of a particular negotiation.

When it comes to deep integration negotiations, "distrustism" is a more important factor than protectionism. Negotiations must therefore focus on building trust in the new common system and in the system of one's counterpart, rather than on trying to exchange one partner's consumer protection for the other's environmental protection. Reciprocity in the traditional GATT sense will not be an effective negotiating mechanism in this context. Instead, a more co-operative approach, based on a community of interests, is required.

Deep integration negotiations also differ from market access negotiations in that supporters are fewer and interests opposing liberalization include regulators themselves. Again, a more co-operative approach is required. Regulators and other stakeholders should be engaged in the negotiations from the outset and be asked to design regulations according to principles such as "least trade restrictive" and "least costly." In addition, confidence-building measures, regular contacts, and the establishment of sister agencies that communicate well and see themselves as mirror images, as well as agreement on scientific approaches, would be useful. Finally, deep integration negotiations require constant transparency and reassurance in relation to stakeholders, business groups, NGOs, and the general public. All these conclusions are relevant for the TTIP negotiating context.

At the multilateral level, the non-discrimination principle continues to be relevant in a world with increasingly complex trade and production patterns. At the same time, the idea of a single undertaking makes little sense when interests are fragmented and the WTO has 160 members. It would be too complex, bordering on artificial, to find a genuine balance of interests across a range of different issues in such a negotiating context.

This indicates that the WTO should adopt a more incremental, step-by-step approach to negotiations in the future. The DDA has clearly not been a success, whereas some incremental progress has taken place at the WTO outside the single-undertaking framework. The analysis thus lends support to the approaches used in the negotiations for an environmental goods agreement (EGA) and an expansion of the Information Technology Agreement (ITA). The fact that international trade is increasingly about production in international supply chains underlines this conclusion. Sector agreements where the main stakeholders work together to reduce cost for their international production processes, is the most intuitive approach from a 21st century political economy perspective. At the same time, the non-discrimination principle is preserved so that the results benefit down-stream consumers world-wide and do not exclude potential future producers in third countries.

Notes:
1 This argument was advanced by Schattenschneider as early as 1935 in a classic study of the Smoot-Hawley tariff legislation.

The opinions expressed here are solely those of the author and do not necessarily reflect the views of the Cato Institute. This essay was prepared as part of a special Cato online forum on The Economics, Geopolitics, and Architecture of the Transatlantic Trade and Investment Partnership.