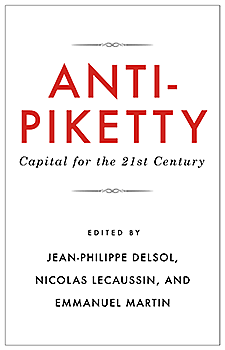 Thomas Piketty’s book, Capital in the Twenty-First Century has enjoyed great success and provides a new theory about wealth and inequality. Piketty argues that capitalism inevitably enriches capitalists more than workers, leading to ever-greater inequality of wealth. He then presents data from the United States, Great Britain, France, and other capitalist economies that appear to confirm his predictions, and concludes that government should enact large wealth taxes to moderate the growing inequality of wealth. As successful as Piketty’s book has been, many major criticisms have been directed at his work. Anti-Piketty: Capital for the 21st Century collects key criticisms from a diverse, global group of 20 experts – who provide rigorous arguments against Piketty’s work while examining the notions of inequality, growth, wealth and capital.