Why Americans Pay Too Much for Health Care

By Charles Silver and David Hyman 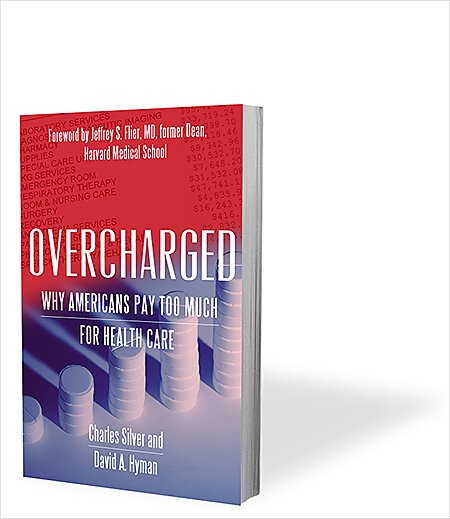 “Overcharged is just what the doctor ordered. We will be better off if it is widely read and discussed.”
– Jeffrey S. Flier, M.D., former dean, Harvard Medical School

“Silver and Hyman frighten us with the facts, and point to ways the biggest player in the health care game — the government — can stop making matters worse.”
– George F. Will, Pulitzer Prize‐​winning columnist and author

“Overcharged is a fast‐​paced trip through the underbelly of the health care industry, the policies that shape it, and their often undesirable and overly costly results. Silver and Hyman make a powerful case for freeing the system from its government‐​created shackles.”
— John McClaughry, founder and vice president, Ethan Allen Institute

Why is the American health care system so dysfunctional and costly? Overcharged lays bare the root causes of America’s health care ills, revealing a system that performs as exactly as designed: expensively, out of control, with no accountability.

Overcharged details solid solutions — in particular, how subjecting our health care system to the same competitive forces that apply to the rest of the economy will result in lower costs and improved access for all. Key to this: Consumers must control the money and exert pressure from below rather than routing massive funds through insurers, employers, public payers (like Medicare and Medicaid) and politicians.

Read two full chapter excerpts:
Chapter 15: Health Care is Expensive Because It’s Insured
Chapter 17: The Retail Sector Will Save Us — If We Let It

Americans Are Paying Too Much for Health Care

After a brief overnight stay in a local hospital for snake bite treatment, Eric Ferguson was hit with a bill for $89,227. How could this possibly happen? Eric Ferguson tells his story.

A year after Dr. Paul Davis’s daughter was given a urine test, she received a bill for the test (but never received the results). The cost? Over $17,000. For a urine test? How can a lab charge so much?.

Over the years, Cato has been creating authoritative and innovation information on reforms that would result in higher quality, more affordable, and more secure health care for all. In addition to what you’ll find in Overcharged, Cato’s web site offers a wealth of print and multimedia material on the Affordable Care Act, health care insurance, Medicare and Medicaid, universal health care, drug pricing, the war on opioids, empowering patients, what to expect from health care legislation, empowering patients, and much more.

What They’re Saying about Overcharged

Read reactions from George Will, Jeffrey Flier, John Mackey, Steve Forbes, and many others, about Overcharged.