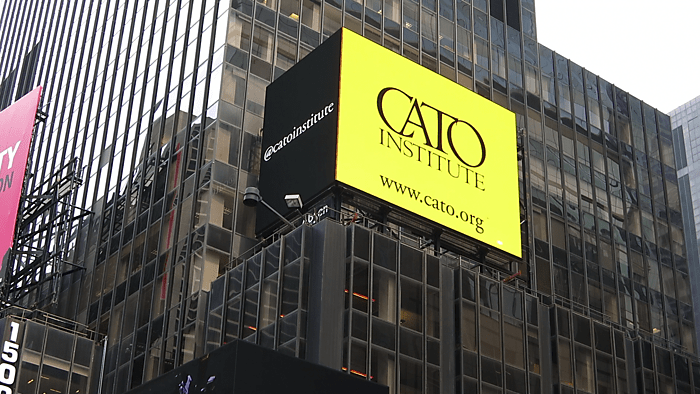 Individual liberty and limited government now light up Times Square.  All summer long, Cato’s commitment to stopping the government from overspending, overregulation, policing the world, and invading our privacy will be shining down to passersby from a jumbo screen.  To those visiting Cato’s site for the first time:  Welcome!  We hope you’ll take an opportunity to learn more about our work on the subjects you’ve seen on our screen, along with the wide range of other current, new, and emerging issues Cato scholars are exploring every day.

Stop Spying on Us

The United States is the freest country in the world, yet American liberties are increasingly violated, limited, or circumscribed by government as it expands into every corner of civil society. The federal government today limits our political speech, subjects us to more wiretapping than ever before, criminalizes more activities every year, interferes with the content of broadcasting, and assumes unprecedented police and prosecutorial powers. The best way to protect civil liberties is to rein in the scope and power of the federal government and begin to return the federal government to its constitutional limits.

END_OF_DOCUMENT_TOKEN_TO_BE_REPLACED

Cato’s foreign and defense policies are guided by the view that the United States is relatively secure, and so should engage the world, trade freely, and work with other countries on common concerns, but avoid trying to dominate it militarily. We should be an example of democracy and human rights, not their armed vindicator abroad. Although that view is largely absent in Washington, D.C. today, it has a rich history, from George Washington to Cold War realists like George Kennan. Cato scholars aim to restore it. A principled and restrained foreign policy would keep the nation out of most foreign conflicts and be cheaper, more ethical, and less destructive of civil liberties.

END_OF_DOCUMENT_TOKEN_TO_BE_REPLACED

Today, there is no greater impediment to American prosperity than the immense body of regulations chronicled in the Federal Register, and academic analysis has documented the economic inefficiencies engendered by the regulatory state. Cato’s regulatory studies set forth a market-oriented vision of “regulatory rollback” that relies on the incentive forces of private property rights to create competitive markets and to provide consumer information and protection.