Yes, we bicycle more than we ride intercity passenger trains. But this travel isn’t evenly distributed. Just as a few people ride bicycles a lot and most not at all, a few people ride Amtrak a lot, a few more occasionally, and most never ride it at all. Given Amtrak s irrelevance from a transportation viewpoint, it receives undue attention and subsidies from both the federal and state governments.

At the same time, everyone relies on railroads for delivery of freight. Railroads send fuels to electrical power plants, deliver automobiles to auto dealers, produce to markets, and consumer goods to people all across the country. At least a third of all freight ton‐​miles in the United States are carried by rail while just one‐​tenth of one percent of passenger‐​miles are on intercity passenger trains.

James J. Hill, the founder and builder of the rail empire that is today known as BNSF, made this point more than 130 years ago. Contrary to popular belief, there is no evidence that he thought that passenger trains were “neither useful nor ornamental.” Why would he when those trains produced 20 percent of his railroads’ revenues, a percentage that steadily increased during his lifetime?

He did note, however, that “the so‐​called [rail] travelling public forms in reality but a small, and the more fortuitous class of the community” whereas those who depend on freight, “direct and indirect, include all. Hence,” he continued, “justice requires that railway systems should be cautious not to favor passenger traffic at the necessary expense of freight payers.”

We should remember this when considering the role of the Surface Transportation Board in supporting Amtrak. Those who argue that the Surface Transportation Board or any part of the federal government should give Amtrak any kind of special priority should remember these two numbers: only one‐​tenth of one percent of passenger travel but one‐​third of freight goes by train.

Personally, I love passenger trains. I once purchased five railroad passenger cars and have written several articles about the history of passenger rail for various journals including Minnesota History. Yet when I look closely at the history of Amtrak, I realize that its creation was a mistake. That mistake was based on erroneous beliefs about the potential value of passenger trains and problems faced by the private railroads.

Both Greyhound and Trailways were essentially the creation of the railroads, but by 1960 the railroads were no longer allowed to invest in potentially profitable services such as buses or airlines. Yet at the same time they were required to operate money‐​losing services including most passenger trains.

In 1958, a report issued by the Interstate Commerce Commission concluded that passenger trains lost money and there was no way to make them profitable. The report predicted that private intercity passenger trains would disappear by 1970. It was off by only one year.

Yet a small number of passenger train advocates disagreed with this conclusion. They believed that passenger train losses were imaginary and that the railroads simply preferred freight trains over passenger trains. Transportation economist George Hilton demolished this argument, pointing out that the railroads in the 1960s had a huge surplus in capacity and that they would have welcomed any kind of train that covered its basic operating costs. Still, true believers led by Anthony Haswell, founder of the National Association of Railroad Passengers, persuaded Congress to hold hearings in 1969 on proposals for the federal government to rescue passenger trains.

Haswell’s testimony in that hearing made it clear that he believed passenger trains could and should be profitable. In fact, he specifically objected to government subsidies to passenger train operations, noting that such subsidies would protect inefficiencies in the railroad industry and give operators “little or no incentive to reduce expenses or increase revenues on their own initiative.” He accurately predicted that such subsidies “have the risk of becoming permanent drains on Government revenues without commensurate public benefits.”

The 1970 collapse of Penn Central, which up to that point was the largest bankruptcy in American history, shook the industry and forced Congress to take action. The action Congress should have taken would have been to eliminate the overregulation that was stifling railroad innovation and profitability. Instead, it created the National Railroad Passenger Corporation—Amtrak—with the expectation that it would be a “for‐​profit corporation.”

Fifty years and more than $50 billion in operating subsidies later, we know that Amtrak isn’t and never will be profitable. Anthony Haswell is sometimes called the father of Amtrak, yet he calls Amtrak a “legendary boondoggle” and admits that he is “personally embarrassed” by the organization he helped create.

If Haswell was wrong about the potential profitability of passenger trains, he was absolutely correct that operating subsidies to those trains would eliminate any incentive to reduce expenses or increase revenues. When Amtrak was created, average rail fares per passenger‐​mile were two‐​thirds of average air fares. By 1990, Amtrak fares had grown to be more than air fares despite huge operating subsidies—or because those operating subsidies encouraged inefficiencies, as Haswell predicted.

Today, roughly half of Amtrak’s costs are subsidized by federal and state governments. Amtrak fares per passenger‐​mile are double average air fares and, counting all subsidies to both Amtrak and the airlines, Amtrak spends more than four times as much moving a passenger‐​mile than the airlines. Since deregulation, the airlines have made themselves so efficient that they attract well over 100 times as much domestic travel as Amtrak.

The creation of Amtrak didn’t particularly help the railroads, which languished under heavy regulatory burdens for another ten years until the Staggers Act was passed in 1980. Conrail, the company that replaced Penn Central, became profitable only after passage of the Staggers Act, proving that deregulation, not Amtrak, was what the railroads needed in 1970.

One of the effects of the Staggers Act was that the railroads shed the surplus capacity that in the 1960s would have allowed passenger trains to survive so long as they covered their basic operating costs. Reducing that capacity has allowed the railroads to reduce their costs and attract more business at reasonable rates. Today, thanks to more efficient operations, rail routes that once saw only a handful of trains per day are now supporting 60, 70, 80, or more freight trains per day.

This sometimes leaves little room for Amtrak. Displacing a single money‐​making freight train with a money‐ losing passenger train is especially unfair considering that so few people use the passenger trains while so many rely on the freight trains.

Passenger train advocates want the railroads to give preference to passenger trains or government spending to increase rail capacities. The 2009 stimulus bill, which provided $8 billion in high‐​speed rail funds (plus another $1.4 billion the next year) showed what happens when the government gets involved in railroads.

Those funds, along with $7 billion in state funds, were spent on ten rail corridors with the intention of increasing the frequencies and speeds of passenger trains in those corridors as well as increasing capacities for freight. Ten years later, in 2019, passenger train frequencies were increased in just one of those corridors and very minor speed increases—typically 1 or 2 miles per hour—were gained in three corridors while speeds actually declined in three other corridors. In essence, this money was entirely wasted.

For example, federal and state taxpayers spent almost $1.4 billion increasing the capacity of a Union Pacific corridor between Chicago and St. Louis. Ostensibly, the purpose was to speed up and increase the frequency of passenger trains. In fact, the increase in speeds would have been small and as of 2019 there had been no increase in either passenger train speeds or frequencies. I am sure Union Pacific appreciates the fact that it can run more freight trains in the corridor, but it should have paid for those improvements itself.

Another corridor was the Northeast Corridor, where Amtrak proudly claims to carry more passengers than the airlines. Yet it admits that it carries only 6 percent of intercity travel in the corridor while highways carry almost 90 percent. Amtrak claims that its Northeast Corridor trains earn an operating profit, but when it calculates those profits it neglects to include depreciation even though depreciation is Amtrak’s second‐ largest operating cost on its annual financial statements.

Depreciation is not just an accounting fiction but a real cost reflecting the amount that needs to be spent to keep infrastructure in a state of good repair. Amtrak’s fantasy that depreciation doesn’t count reflects its failure to maintain the Northeast Corridor, which now has around a $50 billion maintenance backlog. More than $1.6 billion of stimulus funds were given to Amtrak for the Northeast Corridor, but this wasn’t enough to restore the lines and the average speed of trains actually declined. In fact, Amtrak’s fastest New York‐ Washington trains today are slower than Penn Central trains on the same route in 1969.

Amtrak also uses accounting tricks when it claims that fell just $29 million short of making a profit in 2019 and would have made a profit in 2020 were it not for the pandemic. To make that claim, Amtrak not only ignored depreciation, it counted state subsidies to Amtrak trains as “passenger revenues.” After correcting these two fictions, Amtrak actually lost well over $1 billion in 2019.

The lessons for the Surface Transportation Board and the federal government in general are clear. 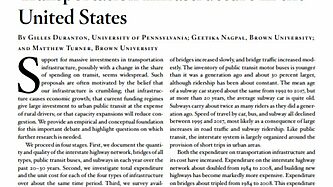 Transportation Infrastructure in the United States 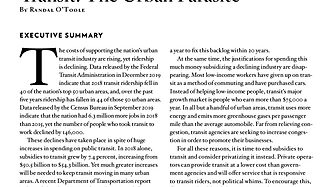