The Cato Institute Summer 2020 National Survey of 2,000 Americans conducted with YouGov finds that nearly two‐​thirds (63%) of Americans support eliminating qualified immunity so that police officers can be sued for misconduct even if there is no previous legal case with similar facts that ruled officers may not engage in that conduct. Thirty‐​seven percent (37%) oppose ending qualified immunity.

While once a fairly unknown legal doctrine, nearly half (47%) of Americans say they’ve heard about qualified immunity, while 53% say they have not. Those who have heard of qualified immunity are more in favor of ending it (69% favor) compared to those who had not heard of it before (58% favor).

Even in situations where police officers did not know they were breaking the law, Americans say officers should be held accountable. Nearly 8 in 10 Americans (79%) say that if a police officer violates a person’s rights but was “unaware at the time that their actions were illegal” they should be held accountable for that misconduct. Most also believe lawsuits should be on the table. A similar share (77%) say police should not be able to avoid lawsuits for misconduct using ignorance of the law as a defense.

Although Americans support ending or reforming qualified immunity for police officers, the public is also worried that intense criticism of the police could drive up crime rates. This is the idea behind the “Ferguson effect,” the theory that distrust of the police makes it difficult for the police to do their jobs, allowing crime to increase.

Fifty‐​five percent (55%) believe ending qualified immunity for police would mean that police “may be too afraid to do their jobs effectively because they will fear being sued or harassed.” Similarly, 55% of Americans are worried that more intense criticism of police could disincentivize them from doing their jobs and crime could go up.

Americans are divided but lean in favor of continuing the practice required in many police union contracts of having an arbitrator review firings of police officers. Fifty‐​two percent (52%) favor allowing arbitrators review and sometimes overturn the firings of police officers for misconduct. Nearly as many (48%) oppose. A majority of Republicans (74%) support this practice as do a slim majority of independents (51%). But a strong majority of Democrats (64%) disagree.

The public supports other police union reforms. For instance, many police union contracts require that police officers’ records of misconduct be erased every few years. However, 84% of Americans oppose this practice, including 58% who strongly oppose. Opposition is non‐​partisan with 89% of Democrats, 85% of independents, and 76% of Republicans who oppose.

Nearly two‐​thirds, 62%, of Americans say police unions should not be allowed to collectively bargain with government officials “over the methods used to hold police officers accountable for misconduct.” Strong majorities of Democrats (71%) and independents (65%) oppose collective bargaining for this purpose. But Republicans stand out. A slim majority (52%) think police unions should get to collectively bargain over disciplinary methods, while nearly as many (48%) oppose.

The survey found 57% of Americans oppose “defunding police departments” while 43% favor defunding them. There are stark partisan divisions: 66% of Democrats favor defunding the police, while majorities of independents (62%) and Republicans (85%) oppose.

These results indicate a notable shift among Democrats from a month ago when an Economist/​YouGov poll found that 34% of Democrats favored “cutting funding for police departments.”1 Twenty percent (20%) of independents and 11% of Republicans agreed.

There is a racial divide as well: a majority (62%) of white Americans and slim majority (51%) of Latino Americans oppose defunding police departments while a majority (61%) of Black Americans support it.

The phrase “defund police” has come to mean different things to different people, besides withdrawing all funds from police departments. For instance, the Economist/​YouGov poll found that only 19% of Democrats favor “abolishing the police,” as did 8% of independents and 5% of Republicans. Similarly, smaller shares of White Americans (8%), Black Americans (22%), and Hispanic Americans (20%) support abolishing police. This indicates that for a considerable number of people defunding the police is about reducing their funding, or redesigning their structure, rather than disbanding police altogether.

Experience with the Police

About 1 in 10 Americans (12%) say they personally have been physically mistreated or abused by a police officer, a quarter say they know someone who has. There is a stark racial divide in reported experiences with the police. Black (19%) and Hispanic Americans (17%) are more than twice as likely as White Americans (8%) to say they personally have been physically abused by police. When taking into account social networks, 44% of Black Americans and 38% of Hispanic Americans say they or someone they know has been abused by police, compared to 28% of White Americans.

The survey also asked the public about their perceptions about what they believed was the primary reason the police arrest disproportionately more African Americans: 40% said racial bias in either policing (30%) or the laws that police enforce (10%), 38% said different crime rates among different racial groups, 13% said different poverty levels among different groups, and 9% said some other reason.

1 The YouGov survey also included a “not sure” option which also impacted the distribution of responses. 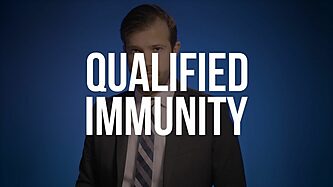 What Is Qualified Immunity?

Policing in America: Understanding Public Attitudes Toward the Police. Results from a National Survey