Dispassionate public policy evaluation is crucial in contexts characterized by strong prior beliefs about the merits of the policy and/​or its targeted outcome. Federal subsidies for purchasing electric cars (and many state‐​level incentives) reflect beliefs that electric vehicles generate a range of benefits, including environmental benefits from electric vehicle use. Rather than simply accepting this belief, our research compares the environmental consequences of gasoline and electric vehicles.

A rigorous assessment of policies pertaining to electric cars is complicated by interactions among economic and physical systems. First, despite being treated by regulators as “zero emission vehicles,” electric vehicles are not necessarily emissions-free. These vehicles produce zero tailpipe emissions, but like gasoline cars, electric cars produce emissions when fossil fuels are burned for energy to move the vehicle.

Gasoline cars store potential energy in the gas tank and then release emissions as fuel is burned concurrent to driving. Electric cars store electricity in batteries. Emissions occur prior to driving when generating the electricity for charging the batteries. So the comparison of emissions intensity is a comparison between burning gasoline for energy and burning whatever fuels are used to generate the electricity used to charge the vehicle’s batteries. In many regions of the United States, electric power is produced by burning coal and natural gas. In such locations, the comparison is one of relative emission intensity, not a comparison of emissions from gasolinepowered cars against a zero-emission vehicle.

Second, there are significant physical differences between emissions from a gasoline-powered car and those produced while charging an electric vehicle. Intuitively, charging an electric vehicle increases electricity demand. Because of the distributed nature of the power grid, electricity is supplied to meet this demand by power plants that may not be near where the vehicle is charged and driven. In contrast, emissions from a gasoline vehicle occur where the vehicle is driven. Thus, even if two vehicles with the same emission intensity are driven in the same location, the geographic pattern of their emissions will differ. Air pollution damages are largely determined by human exposure, since health effects comprise the dominant share of impacts. As such, damages depend on the location of emissions. This means that damages associated with driving electric vehicles may differ from the damages associated with driving gasoline vehicles, even if both are driven in the same location. We study how the environmental benefit of electric cars varies across the United States. Conceptually, we define the environmental benefit as the difference in air pollution damages between “equivalent” gasoline and electric vehicles.

To estimate these damages, we combine an econometric model of emissions from the electricity sector with a model of damages from pollution to calculate damages from both global and local pollution. While the widely held view regarding electric vehicles zeroes in on carbon emissions, we find that ignoring local pollution leads to an overestimate of the benefits of electric vehicles and an underestimate of the geographic heterogeneity in such benefits.

Our estimates of the environmental benefit of an electric car are shown below in Figure 1. The benefit of driving an electric car is large and positive in many places in the West. The western electricity grid is relatively clean—primarily a mix of hydro, nuclear, and natural gas. Therefore, the comparison is between emissions from gasoline relative to a mix of low-emission technologies. However, the benefit is large and negative in many places in the East. The eastern electricity grid relies more heavily on coal. We find electric vehicles generate a negative environmental benefit of about -0.5 cents per mile, on average, across the United States (weighted by vehicle miles). Around this average, our analysis reports that electric vehicles in Los Angeles produce benefits of 3.3 cents per mile, while those in Grand Forks, North Dakota, produce benefits of -3 cents per mile. More generally, electric cars driven in metropolitan areas generate benefits of about one cent per mile. Electric cars driven in rural areas yield benefits of -1.5 cents per mile.

We also find that electric vehicles export pollution across states, while much of the pollution produced by gasoline vehicles stays within-state. Figure 2a shows the increase in particulate-matter pollution associated with driving a fleet of gasoline vehicles in Fulton County, Georgia. Most of the pollution remains in the counties immediately surrounding Fulton. Figure 2b shows the increase in particulate matter caused by driving electric vehicles charged in Fulton County. The emitted pollution is distributed throughout the entire east coast, and most occurs outside Georgia. On average, more than 90 percent of damages from air pollution emissions (not greenhouse gases) from driving an electric car in one state are exported to other states. Just 18 percent of damages from gasoline vehicles are transported to other states. In most states, driving an electric car makes that state’s air cleaner, but increases ambient pollution in other states.

These findings raise fundamental questions regarding the uniform federal subsidy of $7,500 for purchasing an electric vehicle through the Qualified Plug-in Electric Drive Motor Vehicle Credit. The questions relate to the sign, the magnitude, and the one-size-fits-all nature of the subsidy. Our results suggest that the purchase subsidies from driving should be -$742 on average (a negative subsidy is, in effect, a tax). Further, the subsidy should range from $3025 in California to -$4773 in North Dakota. This heterogeneity suggests that environmental benefits from driving cannot justify a uniform federal subsidy.

Are there other benefits from electric cars that might justify this level of subsidies? One life-cycle analysis estimates upstream environmental benefits of switching from a conventional vehicle to an electric vehicle of about -$1500 and nonenvironmental benefits of $1400 due to reduced oil consumption. Clearly, these factors also cannot justify the federal subsidy. It remains an open question whether additional considerations (e.g., innovation spillovers, network effects, or learning by doing) can justify the federal subsidy.

One interpretation of our finding might suggest a need for local discretion in policymaking and implementation. However, the pollution export phenomena we identify calls into question whether local regulation would be effective. In most states, using an electric rather than a gasoline vehicle reduces air pollution in the state. However, in all but 12 states, local discretion makes society worse off because electric vehicles export so much air pollution to other states. This suggests that state regulators may implement subsidies when a tax might be more appropriate.

These perverse incentives suggest a need for federal policy to manage exported damages.

The dispersion patterns of emissions from power plants and cars suggest the appropriate policy for electric vehicles should be at the federal level, but the policy should be differentiated by location. We find that differentiated taxes on miles driven lead to greater efficiency gains than differentiated vehicle-purchase subsidies. This is not surprising, as economists have long recognized the superiority of putting a direct price on externalities relative to other indirect corrective policies. Unfortunately, this insight has limited impact on policymakers, as we observe many indirect policies in place. Because of this tendency, multiple indirect policies may target the same externalities. Our analysis suggests that the interaction of these policies may have significant unintended consequences. 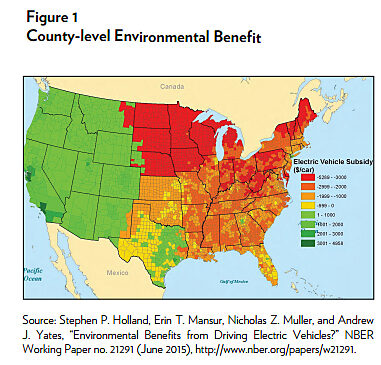 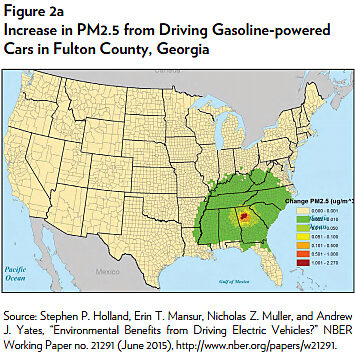 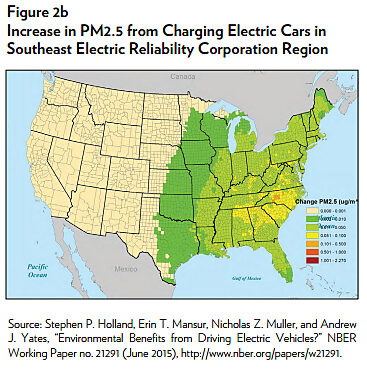 As a general point, our paper argues that public policy evaluation is especially important in contexts characterized by economically significant outcomes with complicated interactions among economic and physical systems, where stakeholders possess strong prior beliefs as to the merits of the policy. The federal subsidy of electric vehicles exhibits each of these traits.